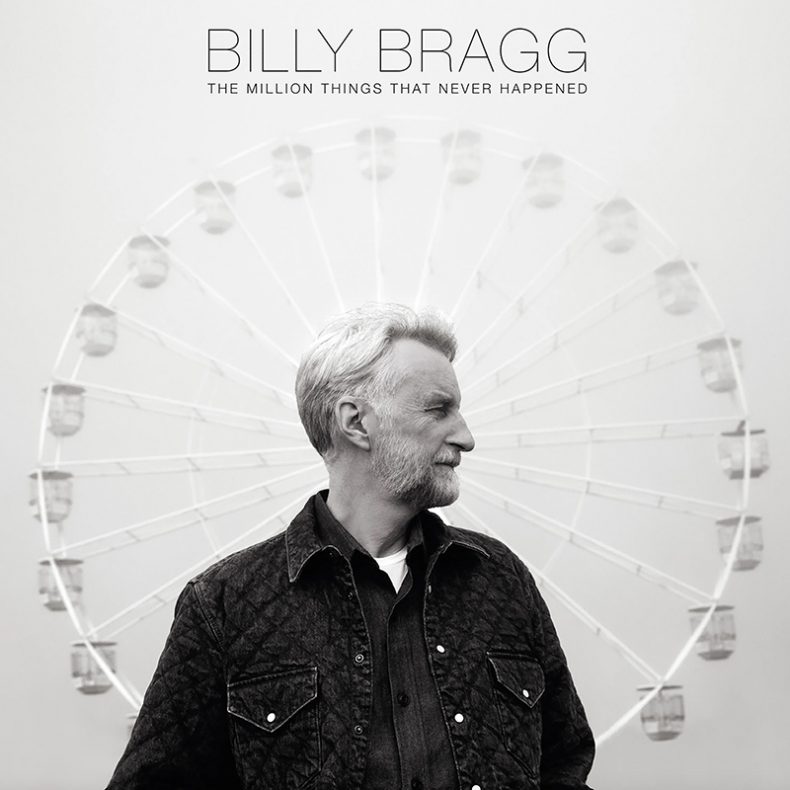 Billy Bragg will release The Million Things That Never Happened, his tenth studio album, on October 8th 2021 on the Cooking Vinyl label. The album, the first pandemic blues album of our times but also a heartfelt paean to human resilience, features 12 soulful country rock gems. The record was produced by Romeo Stodart and Dave Izumi at Echo Zoo studio in Eastbourne. All songs are written by Billy Bragg apart from the final song (Ten Mysterious Photos That Can’t Be Explained), which is co-written by Billy’s son Jack Valero.

Pre-order the album from the official store and for access to discounted early bird tickets for the online concert experience and watch the video performance of new single ‘I Will Be Your Shield’ now at https://BBragg.lnk.to/TMTTNHPR.

‘I Will Be Your Shield’ is available on all streaming platforms now. Early bird tickets for the online concert experience will be available from 9am BST, Wednesday 21 July for 48 hours.

Bragg today releases the first taster from the album, and a personal favourite, the beautiful love song for our times, ‘I Will Be Your Shield’.

Says Billy: “To me this (I Will Be Your Shield) is the heart and soul of the album. I’ve come to the conclusion that empathy is the currency of music – that our job as songwriters is to help people come to terms with their feelings by offering them examples of how others may have dealt with a situation similar to that in which listeners find themselves. After what we’ve all been through, the idea of being a shield, physically, emotionally, psychologically, really resonates.”

On Thursday 9th September ’21, a month prior to the album release, an online concert experience exploring the music and mind of Billy Bragg will be streamed on the Stabal platform. The show will feature the first outing of some songs from the new album, plus some nuggets from Bragg’s illustrious catalogue. He is joined onstage by Romeo Stodart (gtr), Michele Stodart (bass), Darren Beckett (drums), Nick Pynn (lap steel gtr, violin) and Jack Valero (gtr), who all played on The Million Things That Never Happened.

‘Billy Bragg on’…will also offer On-Demand passes with bonus features that will include extra encore performances, exclusive interviews, a look at his new album, an in depth songwriting discussion with Billy and Romeo, plus a behind-the-scenes look into the making of ‘Billy Bragg on…’

‘Billy Bragg on’…| An Online Concert Experience supports the work of Music Venue Trust, a charity of which Billy Bragg is a patron. Fans who purchase tickets to the online event will have the opportunity to donate to the trust at checkout. To find out more about the trust head, to https://musicvenuetrust.com

Billy Bragg previously announced a tour of the UK in the autumn and is very excited to put the last nearly two years behind us and get back to what he does best. The full list of dates is shown below.

Some tickets are still available via https://www.billybragg.co.uk/giglistings

Billy Bragg added best-selling author/musicologist to his CV with the success of his acclaimed 2017 book Roots, Radicals & Rockers – How Skiffle Changed The World. His most recent book, The Three Dimensions of Freedom, an extended essay arguing that liberty must be tempered with a commitment to accountability, has been translated into German and Spanish.

SPILL NEWS strives to keep our readers up to date with news and events in the music industry. We keep you informed of the most recent information regarding new releases, tour dates, and information items about your favourite artists.
RELATED ARTICLES
cooking vinylnews