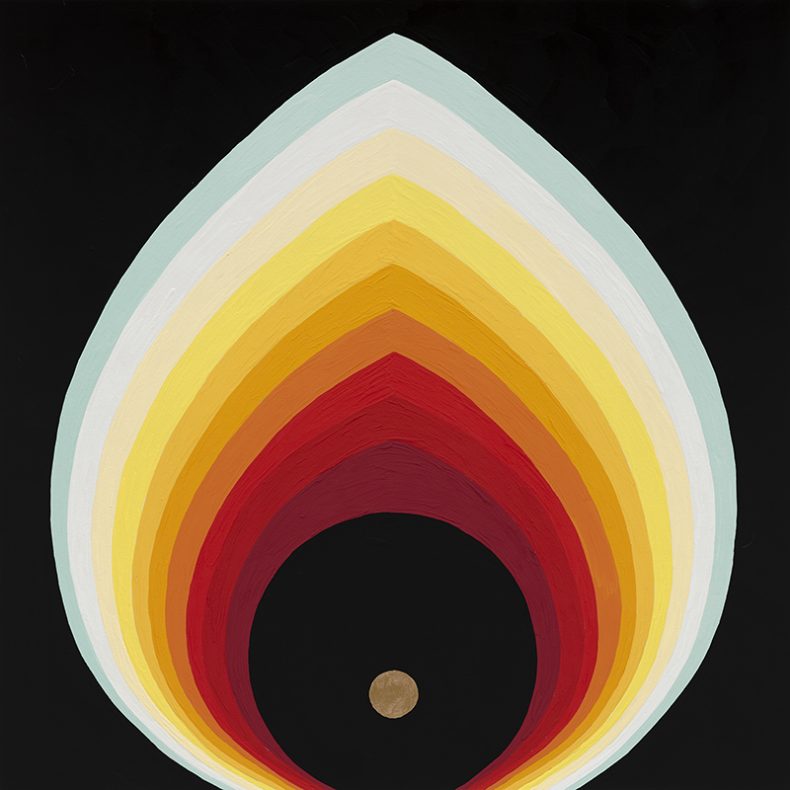 K.D.A.P. (aka Kevin Drew a Picture) is Kevin Drew. You may know him as the leader of Toronto indie-rock ensemble Broken Social Scene—but let’s imagine that he wasn’t. Instead, let’s imagine that the young man who spent his early 20s obsessing over Brian Eno’s ambient works, Morricone soundtracks, Chicago post-rock, and the early Warp Records catalogue never left the basement, never met his future BSS partner Brendan Canning in 1999, never discovered a wider community of musicians, and never worked up the nerve to sing about love and spit on stage in front of thousands of people. Now take that kid, time-warp him to 2021, hand him a smartphone with a DIY beat-making app, and drop him in a forest somewhere in the south of England. The result would sound something like Influences.

Out now via Arts & Crafts, Drew is sharing the new video for “Dooms Dive” from Influences.

“The battle between words and action has lived as long as the single opinion has been next to a microphone,” says Drew. “Hope became a marketing tool that let us become lazy in our teachings of how to live. This created the mighty “doom” campaign we have been living with. Recently, truth has been making a massive comeback. Funded by truth for truth…truth is slowly defeating the doom that seems to sell us a lifestyle of denial. Without transparency we have no way of moving forward. Truth has to win this time.”

Yes, like many records you’ll hear this year, Influences was a product of the pandemic. But it doesn’t so much capture the sound of lockdown as it does liberation, music unbound from the laws of traditional song structure and the crowd-pleasing pressures of fronting a popular rock band. The truth is, Kevin had been itching to make a record like this well before the world stopped turning in March 2020. After his two decades of playing with Broken Social Scene left him with a chronic back injury and a dearth of fresh songwriting inspiration, he longed for both a physical and aesthetic retreat, and to reconnect with the therapeutic powers of instrumental music that he first experienced as a teenager. The pandemic simply provided him with the time and space to finally make it happen, as he spent the summer of 2020 riding out COVID’s first wave in the London area.

But while the aptly-named Influences marks a return to the early inspirations that first prompted Kevin to make music some 25 years ago, it expresses those old impulses through an entirely new language, and exercises them in a completely different environment. This isn’t a basement record; it’s an outdoor record, written in real time during long walks through the woods of Slinford and along the canals of Islington on the smartphone production software Endlesss. For Kevin, this app wasn’t some mere time-killing toy, but a tool that completely transformed his approach to making music, its simple interface presenting him with infinite new possibilities and reigniting a childlike, what-does-this-button-do sense of experimentation. Instead of jamming with musicians, he was now interacting with his natural environment, intuitively switching up his beats and arrangements in response to changes in environmental stimuli, be it the discovery of a new vista or a cyclist whipping by and nearly killing him. The easy-flowing, artistically freeing nature of the music’s creation is reflected in the alias Kevin eventually adopted for the project—KDAP, a.k.a., Kevin Drew a Picture—and by the time he returned to Toronto following his UK retreat, he had accumulated nearly 45 song sketches.

Influences is positively pulsating with life, a kaleidoscopic constellation of strobe-lit electronics, rippling rhythms, and gleaming digital melodies that tap into a very 2021 feeling of existence.

by Ljubinko Zivkovic on March 19, 2021
Jason Collett Best Of Arts & Crafts When Broken Social Scene burst on the scene at the turn of the millennium, the band made a huge splash due to the fact that the collective itself had [...]