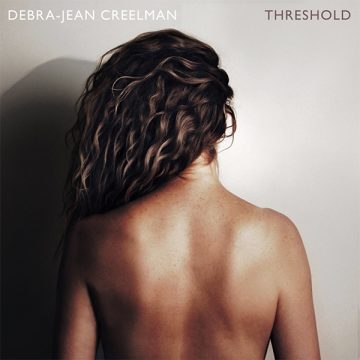 Debra-Jean Creelman has done something very special with Threshold, her new full-length release. It is full of unique sounds and music that truly stands out among the new releases this year. Formerly a member of Mother Mother, Creelman continues with her solo career and  has written and created an incredible collection of music. It is very hard to pigeonhole a style, because she incorporates pop, folk, and alternative music effectively throughout.

Creelman has had some help with the project, including long-time collaborator Joseph Hirabiyashi (Jo Passed) who also produced, mixed, and engineered the LP. He has been working with her since 2013 and has a distinct feel for her music. The two work together perfectly and are able to translate the music onto tape (or digital as the case maybe). She also has some assistance from fellow Mother Mother alumni Molly Guldemond, Louise Burns, and Peggy Lee, who provide the string accompaniment (ably arranged by Hirabiyashi). Others contributing to the album include bassist James Megar, Jesse Zubot and Josh Zubot. However, the team pulls together so Creelam can shine. She is the focal point here.

Her vocals are astounding. From a whisper to powerful vocals, she is quite amazing. Her control and ability to express herself, sometimes with a breath. Give “Body Is Breathing” a listen. It is phenomenal from beginning to end. She creates images in the listener’s head and keeps one glued to the song. The fact that she sequenced the tracklist so that it is  second last is even more surprising. It is such a showstopper, that it seems impossible to follow that song, and yet she does, with the gentle sound collage “Music Box” that, with the wonderful musical accompaniment, Creelman tells her story. It is quite breathtaking.

Threshold opens with the title track,  in which she patiently waits almost a minute before she utters the first line “You were the best I’ve ever known”. It is a sparse, slow, brooding song that builds until the wonderful chaotic ending, much like a relationship. It is a great way to begin, and Creelman maintains the top quality throughout.

Threshold is well-produced and is very cohesive, best listened to from beginning to end. It demands and deserves one’s attention, and one is rewarded when it is completed.

Creelman has created quite a unique and original album with Threshold. It is a fantastic excursion into life, loss and everything in between. At times it may be difficult to listen to, but that is exactly the point. An incredible work by an incredible artist.

Born and raised in Whitby, Aaron discovered music through his love of The Beatles. This led to a career in radio, writing for various publications, and ultimately a radio show about The Beatles (Beatles Universe), which ran for over four years. When not immersed in music, Aaron enjoys spending time with the loves of his life -- his wife Andrea, and daughters Emily and Linda (all of whom have an intense love of music too).
RELATED ARTICLES
album reviewalbum reviewsmodern laundry recording club
8.0