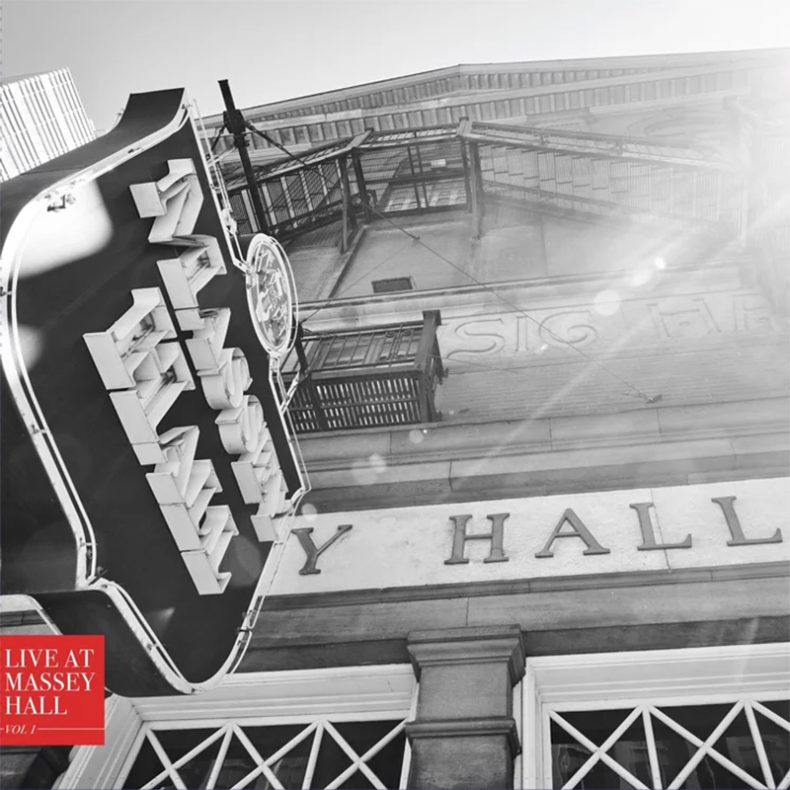 “It’s the Tower of Song of which Leonard Cohen once sang. It’s the temple of music, the Grand Old Lady of Shuter Street, almost as old as the country itself…”

With these liner notes, celebrated author Michael Barclay entrenches the enormous musical history of Toronto’s Massey Hall. His words set the stage for a monumental new vinyl release series that captures the fascinating evolution of the venerated concert venue, a room that has housed timeless performances by everyone from Joni Mitchell to Glenn Gould since opening its doors in 1894.

Today, Arts & Crafts, in collaboration with Massey Hall, announces the first edition in a collection of live compilations from the Live at Massey Hall concert film series, a new platform specially designed to spotlight Canada’s modern day frontier of music legends. Since its launch in 2014, Live at Massey Hall has created a space for emerging talent to flourish in its age-old hall. Now, the music of Live at Massey Hall is captured on record for the first time in a beautiful vinyl package exclusively for Record Store Day Black Friday, available in participating independent record stores across North America on November 23.

“Live at Massey Hall showcases a series of career milestone performances for many of our favourite artists on the historic stage,” says Deane Cameron, Massey Hall President & CEO. “We are grateful to our friends at Arts & Crafts for helping to curate and release these special moments with this vinyl release series.  We hope that it highlights the immensely talented community of artists in this country and offers music fans and record collectors alike a beautiful audio snapshot of these performances at Massey Hall.”

Live at Massey Hall Vol 1 plays through with incredible emotional range, from the solitary intimacy of folk-inspired poets to the electric cacophony of basement-born rock bands. In each recording, the inimitable Hall and its audience play a palpable, vital role, reconciling these landmark nights in each artist’s career.

The record opens with Destroyer alone onstage with his acoustic guitar and elegant poetry, every nuance of his voice and strings filling the silence of the hall. Constantines taps into its punk rock gospel essence with spine-tingling call-and-response. Hayden channels the pulse of the city he came up in, invoking his early days as a performer and a phone call from Massey Hall hero Neil Young. Dan Mangan + Blacksmith stretches the experimental boundaries of against-the-grain folk, while Emily Haines & The Soft Skeleton counter the stadium pop of her band Metric with her own deeper narratives.

Side two opens with the masterfully crafted storytelling of Regina, Saskatchewan’s Andy Shauf, followed by the palpable excitement of francophone Québecois artist Cœur de pirate’s incredible ascension to a sold-out Massey Hall. Bahamas delivers a pin-drop performance of precise songcraft and gorgeous restraint. Japandroids literally bring the house down with the aptly titled “The House That Heaven Built,” before Whitehorse drops the curtain with the heartstopping and serene “Die Alone.”

“As diehard live music fans, it is an incredible honour for Arts & Crafts to take part in bringing this project to fruition, in close collaboration with Massey Hall and all the talented artists and teams involved,” says Arts & Crafts President Kieran Roy. “The immaculate quality of each performance is a testament to the distinct power of Massey Hall, a feeling that is no doubt shared by the countless crowds and artists alike that have made this our indisputable favourite place to witness live music.”

In Barclay’s words, “The best part of Live at Massey Hall Vol 1 is that it just skims the surface. There’s no shortage of top-notch material for subsequent volumes. More than enough to tide us over until 2020, when those iconic red doors on Shuter Street are set to reopen. Until then, enjoy Live at Massey Hall between your headphones.”

SPILL NEWS strives to keep our readers up to date with news and events in the music industry. We keep you informed of the most recent information regarding new releases, tour dates, and information items about your favourite artists.
RELATED ARTICLES
andy shaufarts & craftsbahamas
7.0