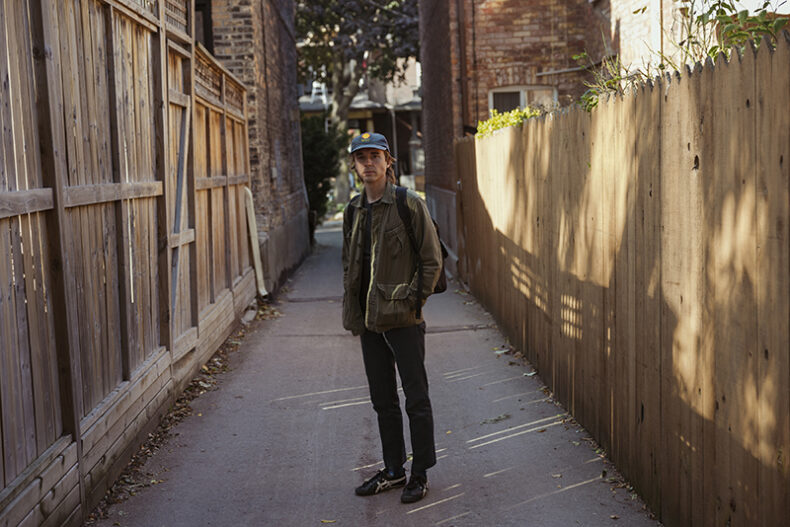 Andy Shauf is driving us out to a wild and dangerous place. Norm, his new album out February 10 on Arts & Crafts, is a recognizable Shauf production, but with a flowing landscape of suppressed grooves propelling the songs toward uncertain destinations. The story takes shape through little epiphanies, accumulating like debris from a series of implosions, beginning with last month’s “jaunty [and] existential” lead single/album opener, “Wasted On You”. Today, Shauf returns with the new single, “Catch Your Eye”. Accompanied by a charming animated video written by Shauf and featuring artwork by Mary Vertulfo, “Catch Your Eye” continues along Norm’s tracklist, and depicts a missed connection in a grocery store. ‘I need to meet you / I need to catch your eye,’ Shauf confesses through layers of vocals and muted guitar, before bright synth tones usher the tune along.

Beginning next month, Shauf will bring his acclaimed live performance to a slew of cities across North America, Europe and the UK in support of Norm, with Katy Kirby and Marina Allen supporting select dates. A full tour schedule is listed below, and tickets are on sale now.

What would eventually become Norm started out in a very different place. Shauf really wanted to steer clear of a concept album, instead aiming to make a normal record. It would be a set of unrelated songs, like albums recorded by other artists, and he would call it Norm. Watching a David Lynch film one night, Shauf found inspiration for how to frame his concept. What appeared to be a nearly static camera shot of a key on a table continued uninterrupted for two minutes, then five minutes, then seven. It seemed impossible in its relentlessness, bordering on genius. Eventually, Shauf realized his browser had crashed and the movie had frozen. Enchanted by the sense of possibility and wonder that had made the film so vivid to him during that period of incomprehension, he wanted to create something similar. He deliberately left open spaces through which readers could enter to find the story and create meaning for themselves.

Once initial sketches emerged and Shauf realized he did, in fact, have the makings of another concept album, he began revising freestanding songs he’d written for the original idea of Norm, altering the lyrics until they had all been reengineered to belong in Norm’s universe. He wanted to connect them without force-marching listeners through an obvious story. Refining the lyrics, he sent them to his friend Nicholas Olson, who interpreted the overall narrative as he understood it. They repeated this process a few times, until Shauf felt the bones of the story as he imagined it lay close enough to the surface to be dug up by anyone who wanted to go looking.

Shauf wrote, performed and recorded the entire album, and recruited Neal Pogue (Tyler the Creator, Janelle Monae, Outkast) to mix. With Shauf singing everything, it’s not always obvious at first whose point of view is represented in each song. But the lyric sheet provides discreet clues to know whose voice we’re hearing at any given moment (Norm’s cast of characters includes four voices in all).

With Norm, Shauf has upended his songwriting methods, creating a deeply haunting and unpredictable universe. He’s tackling love and loss on a more panoramic, extreme scale, but Shauf feels the album is consistent with his earlier focus on small, intense encounters. He uses these close-ups to devastating effect, keeping us focused on the tiny connections between lonely creatures, while raising the stakes on the action to existential levels. There’s a story unfolding that leaps song to song, illuminating the comedy and cruelty of humanity, but, if you listen closely, most of the action takes place in the gaps between tracks.

SPILL NEWS strives to keep our readers up to date with news and events in the music industry. We keep you informed of the most recent information regarding new releases, tour dates, and information items about your favourite artists.
RELATED ARTICLES
andy shaufarts & craftskaty kirby