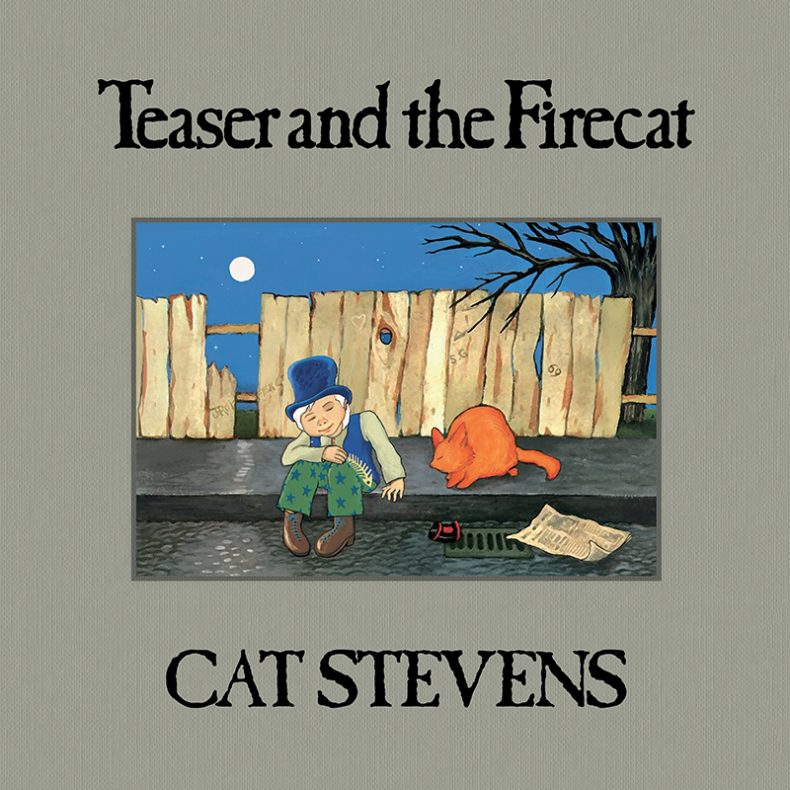 RELEASES DEMO OF “MOONSHADOW” VIA A&M/UMe

Following last year’s 50th anniversaries of the era-defining albums, Tea for the Tillerman and Mona Bone Jakon, 2021 will see Yusuf/Cat Stevens celebrate the succeeding album that immortalized his status as a forerunner in the singer-songwriter movement. The 1971 multi-platinum selling landmark record, Teaser and the Firecat, will be celebrated as a 50th anniversary Super Deluxe Edition box set, due on November 12th, 2021 via A&M/UMe.

A previously unheard recording of the Cat Stevens classic and Teaser album highlight “Moonshadow (Olympic Studio Demo, 1970)” is released today. Actually recorded at Olympic before the release of the two 1970 albums, Mona Bone Jakon and Tea For The Tillerman, this version provides a fascinating insight into the origins of one of the most enduring songs of the 1970s. Listen HERE.

Cat Stevens achieved phenomenal success with his early work, but it was Teaser and the Firecat, his third LP with Island Records – A&M in the U.S. – that propelled Cat Stevens into superstardom, spawning some of his most unforgettable hits including “Moonshadow,” “Peace Train” and “Morning Has Broken,” songs by a youthful spiritual seeker, wise beyond his years that would lay the pretext for a poignant new wave of soulful troubadours and poets. Later, “The Wind” would see Teaser and the Firecat celebrated anew, rising to prominence following the song’s use in Wes Anderson’s much celebrated film “Rushmore” as well as the Oscar-winning Cameron Crowe film, “Almost Famous.” Through his spell-binding gift for songwriting and his introspective vision, Cat delivered a universal sense of hope and peace in Teaser and the Firecat that still resonates profoundly to this day.

Teaser and the Firecat walked tall in what was a year of classic albums and events that would echo down the decades. The 12 months of 1971 was a transitional year in pop culture in which the album joined John Lennon’s Imagine, David Bowie’s Hunky Dory, Joni Mitchell’s Blue, Marvin Gaye’s What’s Going On, The Rolling Stones’ Sticky Fingers and Led Zeppelin IV as the soundtrack to the momentous 500,000 strong anti-Vietnam war March on Washington D.C., the largest demonstration against US war in history, and the “Fight of the Century” at Madison Square Garden, New York City which saw Joe Frazer hand Muhammad Ali his first ever defeat. With the ’60s now in the rear-view mirror – The Beatles gone, Jimi Hendrix and Janis Joplin having already passed on, and Jim Morrison tragically joining their number in July ’71 – there was a distinct mood of change in the air. Along with burgeoning heavy rock and the socially-conscious R&B of Funkadelic and Sly And The Family Stone, it was the era of the poetical singer-songwriter. As well as being part of this latter movement, Cat Stevens was himself inspired by it.

Half a century later, Teaser and the Firecat has been given the ultimate treatment in a brand new Super Deluxe Edition set; the most in-depth and definitive version of the album possible. Presented in a remastering of Yusuf’s original artwork, the release will include: 41 previously unreleased audio tracks and 21 live video performances on disc for the first time, amongst an entire CD and LP of studio demos and alternate mixes; a stunning 44-page, 12″ soft cover replica of the original Teaser and the Firecat book, hand written and illustrated by Yusuf in 1972, and now featuring text in 10 languages; and a 108-page hard-cover 12″ essay book, alongside a host of other rarities across 4CDs, Blu-Ray, 2 LPs and 7″ vinyl. The set will be presented in a rigid clamshell box and is the latest in a series of boxsets – so far consisting of Back To Earth, Mona Bone Jakon and Tea for the Tillerman – that celebrate the albums in full depth with the direct involvement and direction of Yusuf and his son Yoriyos, who curates and designs each box set. 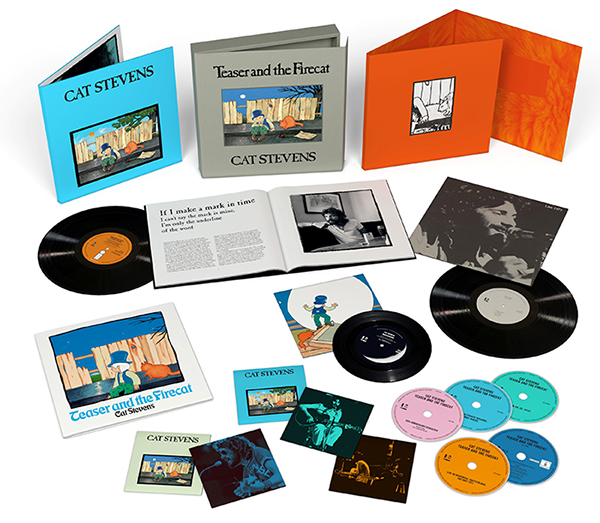 There will also be a slimmed down version of the Super Deluxe Edition, including the 108-page book in a soft cover format, along with the 4CDs and Blu-ray, housed in a rigid slipcase. Other 50th Anniversary reissue formats include a 2CD Deluxe Edition, plus 1CD and 1LP Remasters.

The 50th anniversary remaster of the album was mixed by David Hefti on CD and LP, the Super Deluxe Edition also includes a CD of previously unreleased studio material and bonus tracks, an alternate version of the album on LP, as well as a third and fourth CD featuring 23 live performances from 1971. The 50th anniversary remaster was completed at Abbey Road Studios, and was overseen by original album producer, Paul Samwell-Smith.

The set includes a remastered 7″ single of “Moonshadow,” backed with a previously unreleased Spike Milligan narration of the track from the 1977 Teaser and the Firecat animated video. The 50th anniversary edition also includes an exclusive vinyl LP, tracklisted with 5 live performances at Montreux in 1971 and six BBC Recordings, as well as a Blu-Ray disc featuring a restored version of the 1977 animated video for “Moonshadow,” a live performance of “The Wind” from 2020, plus 21 live TV performances.

Also featured in the collection is “Bitterblue²,” a newly recorded and never-before-heard version of the classic Teaser album track. Yusuf’s rich vocal, sung a full octave lower than the original, imparts a new sense of experience and gravity to the song whose lyrics seem to resonate with a whole new level of meaning: “I’ve been waiting a long time/To be back beyond.”

Ahead of the 50th anniversary Teaser and the Firecat celebrations, 2021 has seen Yusuf/Cat Stevens partner with New York Times bestselling author and illustrator Peter H. Reynolds to produce “Peace Train,” a children’s book celebrating the fiftieth anniversary of the iconic song’s original release. Featuring joyful illustrations and the timeless lyrics of the much-loved peace anthem, this hopeful picture book – now a New York Times bestseller itself – continues Yusuf’s commitment to children’s education and shared love for people of all cultures and identities.

Elsewhere, July 2021 saw a special Record Store Day release of the 1971 “Harold And Maude” soundtrack, featuring iconic songs from Tea for the Tillerman and Mona Bone Jakon alongside two new compositions for the film, “If You Want To Sing Out, Sing Out” and “Don’t Be Shy.”

50th Anniversary Super Deluxe Editions of Teaser and the Firecat will be released on November 12th via A&M/UMe in multiple formats.

by Ryan Sagadore on September 18, 2020
Yusuf/Cat Stevens Tea For The Tillerman² Universal Music Half a century after Cat Stevens released Tea for the Tillerman, we find Yusuf taking a retrospective look at [...]