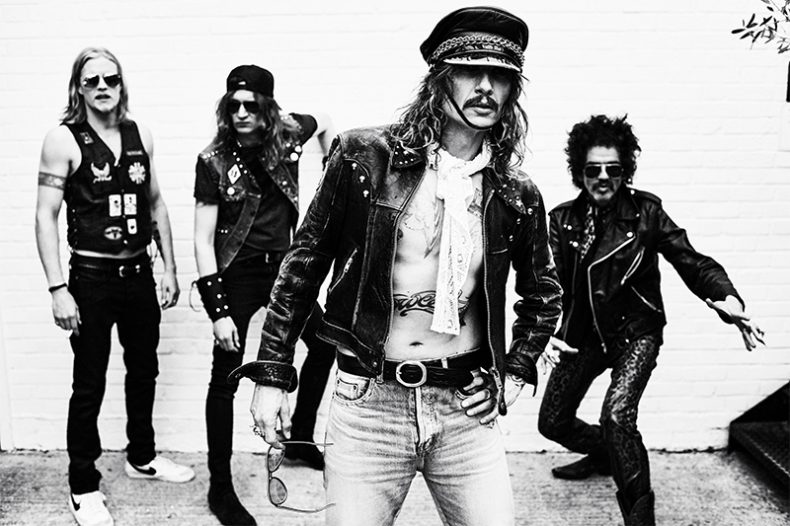 “Jussy’s Girl” is sensitive as a falling boulder. It oozes rock n’ roll extravagance with huge 80s influenced riffs and an anthemic chorus that summons the inescapable carnal powers of love. The fantastical “Jussy’s Girl” video features Justin Hawkins as a leather-clad biker journeying through a telephone booth time machine back to the days of black and white silent movies for a nefarious murder mystery, starring his musical companions in never-before-seen style.

Regarding the single Justin says, “’Jussy’s Girl’ is a song about unrequited desires of both the flesh and the heart. Although one could argue that hearts are made out of the same stuff as flesh. You know what I mean though. It’s about an unspeakable longing, but sounds like a bloke walking around in his 501s on a sunny day. It’s sad, but also carefree. Sonically we were aiming for somewhere between Def Leppard and Billy Ocean. Well, I was. There’s a helicopter in it and an awesome guitar solo. What more could you ask for?”

“Jussy’s Girl” is the latest single from The Darkness’ magnificent opus Motorheart. The song follows the release of the high-octane riffola “Nobody Can See Me Cry” and the growling, pounding title track that pays homage to a devoted sex robot.

Motorheart will be released in a wide variety of formats that offer a complete aural experience. In addition to standard and deluxe versions – both digitally and on CD, there’s a heavyweight black vinyl album, limited edition colour LPs, an old-school cassette version and exclusive bundles and signed editions.

The Darkness will be showcasing the live potency of Motorheart on their extensive 22-date UK headline tour kicking off in November followed by a European run at the top of next year. A true spectacle to behold, fans will be treated to brand new songs from the album as well as hits from across their award-winning, platinum-selling back catalogue. Stay tuned for North American 2022 tour dates to be announced.

With a back catalogue overflowing with sonic gold and a live reputation that most bands can only dream of attaining, The Darkness have established themselves as one of the most loved and important British rock bands of our time. Their last album, 2019’s Easter Is Cancelled, became the band’s fourth Top 10 album in the UK, whilst also topping the Official Charts Top 40 Rock Chart and the iTunes Rock Chart, alongside receiving swaths of critical praise.