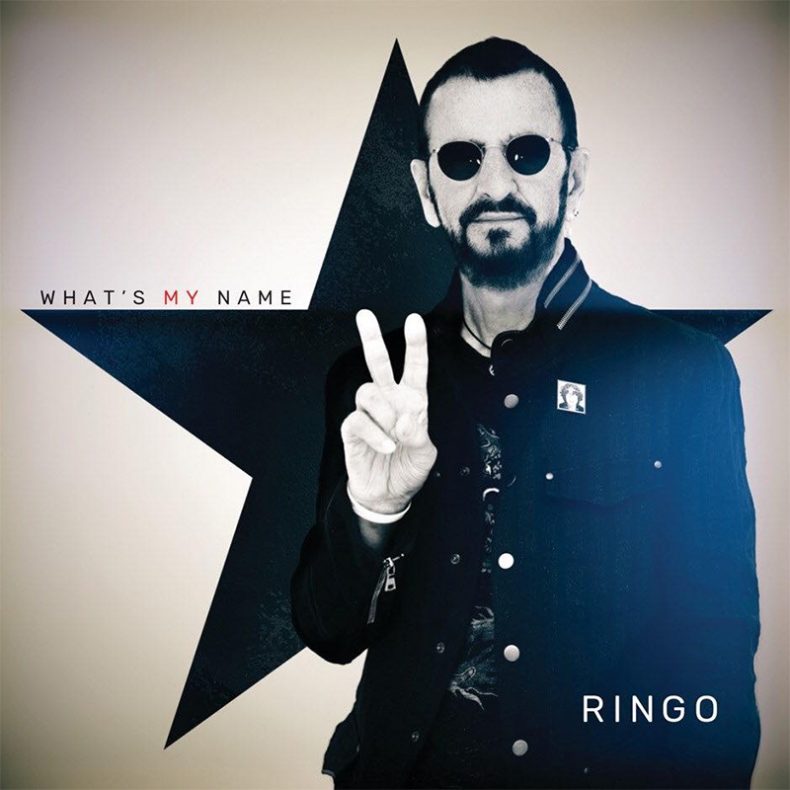 Today, Ringo Starr announced his 20th studio record, What’s My Name, to be released on UMC October 25, 2019. What’s My Name is the latest in a series of heartfelt and homespun records that Starr has produced in his home studio and a distinguished, ever-changing yet often repeating cast of musical characters and friends playing along with Ringo. Those friends include Paul McCartney, Joe Walsh, Edgar Winter, Dave Stewart, Benmont Tench, Steve Lukather, Nathan East, Colin Hay, Richard Page, Warren Ham, Windy Wagner, Kari Kimmel and more.

For Ringo, recording at home, known as Roccabella West, has become a welcome and productive way of life. “I don’t want to be in an old-fashioned recording studio anymore, really,” Starr explains. “I’ve had enough of the big glass wall and the separation.  We are all together in here, whoever I invite over. This is the smallest club in town. And I love it, being at home, being able to say hi to Barb, it’s just been good for me and the music.”

With the help of the many familiar faces appearing on the album and in the credits, as well as Bruce Sugar recording and mixing, What’s My Name reflects Ringo desire to keep his homemade music feeling fresh and vital, whether by introducing new collaborators, like songwriter Sam Hollander, or by being more open to recording songs he has not written, co-written or in one case, even produced. “Sam Hollander’s people got to Bruce Grakal, my lawyer, and said, “Sam would like to say hi to Ringo.” So I told Sam to come over. After we wrote a song together, “Thank God For Music.” Then Sam called and said, “I think I may have another song,” so I said, “Let me hear it.” He had written it all. He had written a song out of things I said in an interview in Rolling Stone.  I loved the sentiment of it – he had one verse about spending too much time in hospitals, but I didn’t want to even sing that verse – the pity verse. Sam came over and I put the vocals on, and said, `You produce this one,’ but Sam said, “Well, you’re going to do drums.” So, I went in and played it through twice.” I like two takes. And he took “Better Days” away and did it.”

The new album’s title track and first single — “What’s My Name” — is a rousing anthem written by a returning All-Starr Band member this past summer, Colin Hay, that turns a familiar chant from Ringo’s live shows into a rousing rocker sure to be a future crowd-pleaser. “This was Colin Hay’s fourth time in the All-Starr Band, and a friend told me that, unbeknownst to me, Colin wrote a song years ago called, “What’s My Name.” I said, “Bring it up to the house and let’s hear it.” Later I heard, Colin couldn’t find it! He’d written the song down six years ago and put it in this pile or that pile.  But it ended up at the bottom of the drawer. So, Colin came over and played it for me, and I LOVED it. I loved the verses. I loved the sentiment. In all honesty, there’s not a lot of people who could get away with asking, “What’s my name?” in a song. If you’ve been to the show, you already know the title. I’m blessed that most things coming my way are peace and love. There are still always trials and tribulations. But I just feel in life, the sun shines this way. I’m blessed. I always have the same talk – an audience can be tortured. We give them everything we’ve got. We give each other everything we’ve got. And sometimes it’s not enough. But most nights it’s everything. I’ll play the best I can for you. And you play the best you can for me. That’s all I can ask.”

Yet the emotional centrepiece of What’s My Name is Starr’s deeply felt version of “Grow Old With Me” by his late great friend John Lennon. This is a performance for the ages, one made all the more powerful and moving when we realize that Ringo is blessed to be still living the dream of growing older with the one he loves in a way that his beloved friend John was imagining with Yoko when he wrote this song in the years before his tragic death.  As Starr rightly notes with a warm smile, “I’m still living that dream.”

For Ringo, the inspiration to record “Grow Old With Me” now came when he ran into noted record producer Jack Douglas who had produced John Lennon and Yoko Ono’s Double Fantasy album, among other classic recordings.

“Jack asked if I ever heard The Bermuda Tapes, John’s demos from that time,” Ringo recalls. “And I had never heard all this. The idea that John was talking about me in that time before he died, well, I’m an emotional person. And I just loved this song. I sang it the best that I could. I do well up when I think of John this deeply. And I’ve done my best. We’ve done our best. The other good thing is that I really wanted Paul to play on it, and he said yes. Paul came over and he played bass and sings a little bit on this with me. So John’s on it in a way. I’m on it and Paul’s on it. It’s not a publicity stunt. This is just what I wanted. And the strings that Jack arranged for this track, if you really listen, they do one line from “Here Comes The Sun.” So in a way, it’s the four of us.”

What’s My Name is filled with other stand out collaborations and inspirations – starting with the opening track, the rocking “Gotta Get Up To Get Down”, which Starr co-wrote with his brother in law and long-time musical partner Joe Walsh. “I’ve been making music with Joe long before we became brothers, “Ringo said. “And we were having dinner with Klaus Voormann months ago, and for whatever, I said, “Well, you’ve got to get up to get down.” Joe and looked at each other and said, “We know that’s the title, so let’s write a song about it. “That’s how it is.

Edgar Winter’s part on this track is just incredible. Edgar’s always incredible, but he outdoes himself in my book.” Additional tracks include: “It’s Not Love That You Want;” “Magic” co- written with his long time All-Starr Steve Lukather “I wrote that with Steve Lukather, who is magic. I made a mistake of telling Steve, “You’re my last best friend,” and so that how we’re live now. And he’s a beautiful guy. He sometimes puts out a hard shell, but he is so soulful. We work well together. And he’s even better when he’s not playing a thousand notes a minute – which he can. He’s the man. I love the man. Don’t tell him. Sometimes Steve’s so happy playing with me, I say, “You’re having too much fun.”

A cover of the classic “Money (That’s What I Want);” “Send Love, Spread Peace” and “Life Is Good,” which was inspired by the book written by the optimistic apparel company of the same name founded by Bert & John Jacobs. “I went to receive my honour at the Paley Center last year and I was wearing a hat that said, “Life is Good.” I liked the sentiment. And the guys from the Life is Good organization sent me t-shirts and a book, and Gary and I noticed that. And that’s how we wrote it. If we have a title, we just go.”

What’s My Name – to that question writer David Wild mused, What’s In A Name?

In the spectacular and singular case of Ringo Starr, what’s in his name is an enduringly fabulous lifetime of music & meaning, and yes, Peace & Love that all comes through loud and clear on Ringo’s latest album, What’s My Name.

Yes, there’s more than half a century of illustrious history in Ringo’s name. Yet what makes all that mean so much here and now is that the artist formerly known as Richard Starkey keeps earning his excellent and beloved name all over again, every time that he takes the stage with one of his All-Starr Bands and whenever he releases new music.

In the best way possible, drumming remains Ringo’s madness, and keeps him moving forward in time. As Starr remembers affectionately, “When I was a teenager, my mom always said, “Son, you’re at your happiest when you’re playing.” And it’s still true to this day. I’m blessed. I had a dream back when I was thirteen, and just last night I played with all my friends at the Greek, and I’ve been putting together All-Starr bands for 30 years. And it’s still a thrill.”

Starr also has a new book coming out October 15, Another Day In the Life (Genesis Publications) reflects his love of music, travel and nature and shows us the world as seen through Ringo’s eyes. Originally published as a limited edition, this hardback version will be widely available.

What’s My Name Is Available To Order HERE

SPILL NEW MUSIC strives to keep our readers up-to-date with new releases by your favourite artists, keeping you informed of new album, single, and video releases. Stay tuned -- who knows, you might just discover your new favourite band.
RELATED ARTICLES
another day in the lifegenesis publicationsnew music
10