Festivals
156
previous article
SPILL FEATURE: LIVING IN AN INFERNO, LIVING IN AN OVEN - A CONVERSATION WITH ROBERT FORSTER
next article
SPILL NEW MUSIC: RINGO STARR ANNOUNCES HIS 20TH STUDIO ALBUM 'WHAT’S MY NAME' TO BE RELEASED OCTOBER 25 VIA UMC 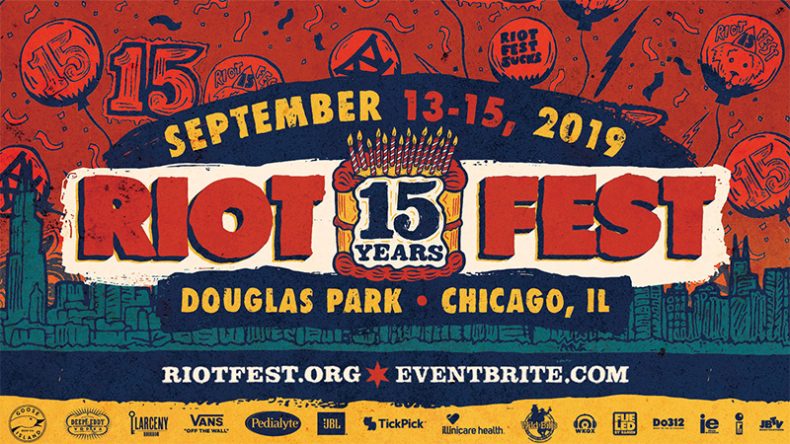 The first night of Riot Fest 2019 set a high bar for the rest of the festival, just for it to be repeatedly jumped right over throughout the weekend, with no hesitation. The festival was celebrating its 15th birthday and it made sure to do so in style. blink-182 headlined the opening night, backlit by the first Blood Moon on a Friday the 13th in 200 years, which is a testament enough in itself on what a wild, crazy, and beautiful reminder of what it’s like to be alive that the entire festival was.

When you look at the lineup for a festival, you are usually going to find at least a couple of bands on each day that you want to see, but Riot Fest has managed to make it so that you have to be there pretty much from the time the doors open ‘til they close because there’s always something worth seeing. The upside to not having much of a break is when you have a bit of time between bands, you can spend it over in the carnival section of the festival, refueling with some delicious lemonade and a variety of food choices, playing games, or taking advantage of the rides and the beautiful Ferris Wheel that overlooks the festival grounds.

The headlining acts are usually what draws in the big crowds, but when you realize that Anti Flag is slotted at one pm you begin to wonder if and how anyone gets any sleep at all. Riot Fest’s birthday bash was full of epic performances, beautifully contrasting each other from start to finish. Slayer headlined the second night, playing their last ever show in Chicago, while Bikini Kill headlined the final night with their first performance in Chicago since the ‘90s. Rebirths, farewells, and meaningful artist monologues all contribute to making this festival one that sits at the top of the must-hit-list. Not to mention, Chicago natives Rise Against put on a show that could be seen 15 times over and those are the kinds of fans that buy tickets to these festivals – this isn’t a festival for the faint of heart, it is a festival that pushes you to the limit and then makes you jump into a pit of sweaty people of all ages and backgrounds who have probably seen some of the bands at least more than once before.

The only speed bump that presented itself (mind you, a rather large one) was sound traveling not only between stages but bleeding so badly that it totally overtook performances. While it wasn’t as prevalent during the day, blink-182’s headlining set the first night became almost inaudible as you moved to the back of the crowd and Bloc Party didn’t stand a chance against Slayer. This is something that will definitely need to be addressed in upcoming years, but there’s no doubt that they’ve got what it takes to figure it out.

The truly remarkable thing about the festival itself even outside of the dynamic lineup they manage to curate year after year is that the organizers are true Chicagoans and they take care of their own as well as those who travel to be there. The neighbourhood surrounding the festival grounds is well taken care of, the people who live there are considered and benefit from the festival-goers being around for a few days, and they really go above and beyond for the people working at the event. As cliche as it is to say, they really are the MVPs and what makes this festival whole, something that is rare to come across. It is also something that will likely make sure that they are around for many, many years to come – so get ready to come back for the 30th. Many thanks again to everyone involved in Riot Fest 2019 for having us!

Music makes the worst situations bearable and the best situations even better. I'm just here to share the inside scoop and anything you may have missed, while I establish my own voice in the industry. Born and raised in Ottawa, I never go anywhere without a set of headphones. Live music has been my vice for as long as I can remember and sharing stage side stories is a major bonus.
RELATED ARTICLES
against meanthraxchicago