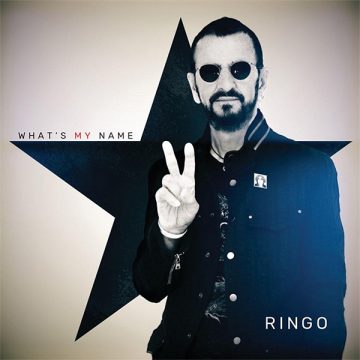 What’s My Name is Ringo Starr’s 20th solo studio album.  Hard to believe but true. That number does not include the numerous live recordings released over the years and his guest appearances on other’s records. Starr has been remarkably consistent, both in recording and touring, and please keep in mind he turned 79 this year. Every summer Starr tours the world with his All Starrs. This past summer was no exception. His tours are extremely successful, and he is one of the few artists of his generation who continues to work in such a fashion.

During his shows, one of his routines is to ask the audience “what’s my name”, to which the crowd screams back, “RINGO”. Colin Hay, who has toured with Starr,  used this catchphrase to write the title track (and first single) for Starr, and it sets the tone of the album quite nicely.

Starr’s friends come out to play and help throughout the album. Joe Walsh co-wrote and plays on the opening track, “Gotta Get Up To Get Down”, a song that harkens back to his 1970’s albums, and Walsh sounds great on it. The album continues on with Ringo’s inspirational “It’s Not Love That You Want”, which is one of his finest songs ever. Steve Lukathur of Toto co-wrote “Magic” with Ringo, which is yet another highlight of the album. Very melodic, excellent classic rock song. Other All Starrs make appearances on the album, including Edgar Winter, Richard Page, Warren Ham, as well as auxiliary member Dave Stewart

As with previous albums, Starr  revisits the past couple of times, with his own version of “Money”. Starr’s vocals are very modulated on this track and, although it shouldn’t, it works. The song rocks, highlighted by expert musicianship and some fine drumming from Mr. Starr. It is always nice to see Starr acknowledge his historic past.

He goes one step further by having Paul McCartney join him on the incredibly beautiful “Grown Old With Me”, a song John Lennon was working on but was never able to finish. It came to Starr’s attention that Lennon said on one demo that it would be a good one for Starr. So, after 39 years, Starr and McCartney try their hand at it. The result is nothing short of stunning, and quite possibly the best three minutes and 18 seconds released this year. Jack Douglas, who co-produced Lennon’s last album arranged this for Ringo.

What’s My Name is exactly what you expect from Ringo Starr, and that is just fine with me. Ringo has produced yet another album chock full of great songs, superbly produced and recorded in his home studio in Los Angeles. The album is based on the wonderful theme message of peace and love. There is not a weak song here, and it is an extremely entertaining album. Starr’s voice is stronger than ever and his musicianship is solid. Fans will enjoy this album, and those with an open mind may find something within these grooves as well. What’s his name? Ringo Starr of course, and it is comforting and nice to have a new album from one of the masters.

Born and raised in Whitby, Aaron discovered music through his love of The Beatles. This led to a career in radio, writing for various publications, and ultimately a radio show about The Beatles (Beatles Universe), which ran for over four years. When not immersed in music, Aaron enjoys spending time with the loves of his life -- his wife Andrea, and daughters Emily and Linda (all of whom have an intense love of music too).
RELATED ARTICLES
album reviewalbum reviewsanother day in the life
10