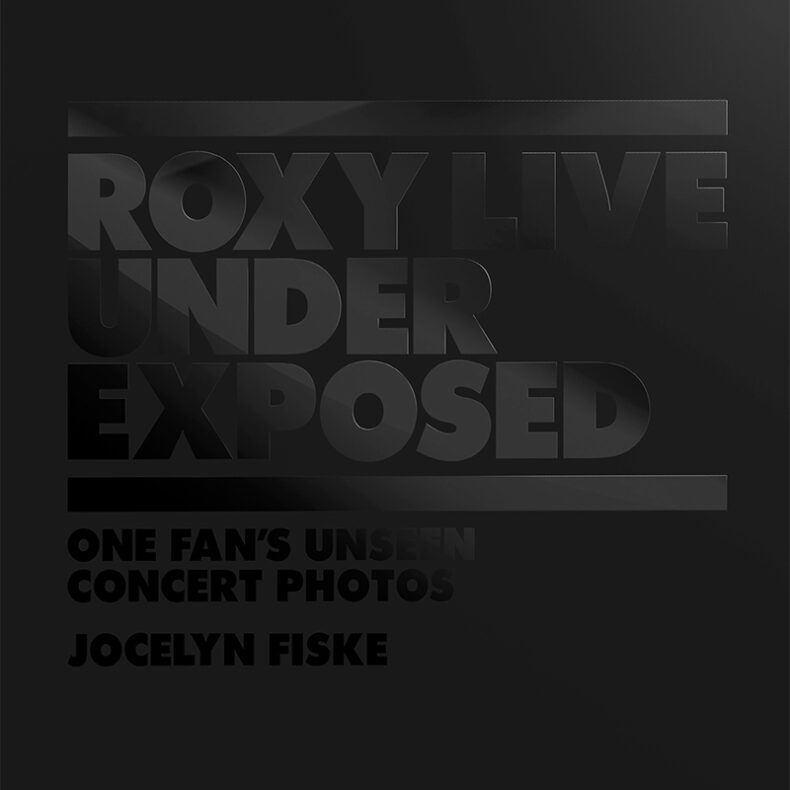 On September 7, 2022 Roxy Music launched their 50th Anniversary Tour, featuring Bryan Ferry, Phil Manzanera, Paul Thompson and Andy McKay. This book, Roxy Live: Under Exposed: One Fan’s Unseen Concert Photos helps in the celebration of the 50th Anniversary of Roxy Music (there is also a compilation album being released). Jocelyn Fiske, in her preface, states clearly that she is not a professional photographer nor a member of the press. Her father, however, was a lead writer for The Newcastle Evening Chronicle and this means that he had a press pass, and it seems she had access to his pass. Fiske put it to good use and attended many shows. But over time the photos were forgotten, until recently, when she came across a cache of photos and slides she took during their tours and solo tours.

The end result is a fascinating look at Roxy Music through the years and how they transformed themselves and pop culture with each album and tour. The photos and book start with the Stranded tour of 1973. Ferry is there with his white jacket tuxedo, while Manzanera continues to rock the glam look. These are fantastic photos that have a wonderful fan’s eye view. Interestingly, she even manages to identify Bryan Ferry’s parents but get a shot of them at their son’s show. She also gets a shot of his sister and nephew. Again, something seldom seen which not only humanizes the band but demonstrates the fan’s ability to identify family members.

By 1974’s Country Life tour, Ferry ditched the tux and went a bit more casual. This is evidenced in the pictures. What is very cool about these photos is that they are taken by a fan in the audience, and not professionally done. One senses the excitement from the fan’s point of view. The addition of photos of ticket stubs complete the story. Fiske documents the Siren, Manifesto and Avalon tours as well and again, the photos are outstanding. She also manages to document Ferry’s In Your Mind tour, with a, once again, very dapper Bryan Ferry taking centre stage.

This is one thing that I love about the book, is that it documents their solo efforts. Fiske is obviously a fan and appreciates their solo work as much as the Roxy Music output. It is refreshing to see a couple of photos of The Explorers, a band featuring McKay and Manzanera. This is a band not discussed and seldom seen, so it is great Fiske include them, even though they are far from being her favourite.

Fiske includes some text with the photos to not only identify who is in the picture but also to set some context for the images. The text is, again, a fan’s perspective and adds a great deal to the book. She is more interested in using the photos to tell the story rather than discussing camera used, and technique which sometimes happens in such books. Here, her text is short, informative and genuinely heartwarming at times.

Overall, this is an excellent book full of never before seen photos of Roxy Music and their solo outings. Roxy Music is a band that has incorporated a visual style with their music, and this book clearly demonstrates not only why but how well they did it. Roxy Music has always had a striking visual stance, and continues to do so to this day. Roxy Live: Under Exposed: One Fan’s Unseen Concert Photos is a brilliant book and a nice companion to the recently released Bryan Ferry Lyrics. Roxy Music fans will love this intimate look at the band from a fan’s perspective.

Born and raised in Whitby, Aaron discovered music through his love of The Beatles. This led to a career in radio, writing for various publications, and ultimately a radio show about The Beatles (Beatles Universe), which ran for over four years. When not immersed in music, Aaron enjoys spending time with the loves of his life -- his wife Andrea, and daughters Emily and Linda (all of whom have an intense love of music too).
RELATED ARTICLES
booksbryan ferrymore than this