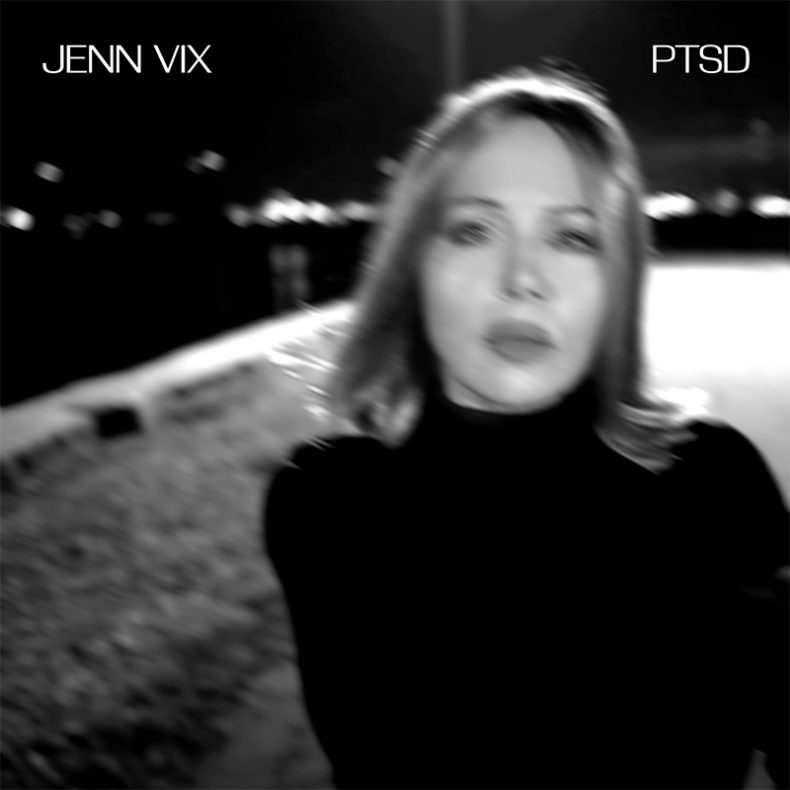 What do you get when you take powerful vocals, a stunning stage presence, an iconic image and excellence in the songwriting department and run them through a thread connecting not one, but two, members of The Cure and a whole series of other artists from other iconic bands, including Psychedelic Furs? You get Jenn Vix.

Based in Rhode Island but also frequently in Boston to perform and rehearse with her new post-punk / electronic rock duo Feeney Vix (she both sings and plays electronic drums here), Vix is back with new music, set to release a new single, called “PTSD”.

The lyrics point to her own first-hand experience with this disorder. This is a timely topic, being a problem that affects so many people. According to the U.S. Department of Veterans Affairs, 6% of the population will have PTSD at some point in their lives, meaning that about 15 million American adults have PTSD during a given year. Women are more likely to experience sexual assault and child sexual abuse. Men are more likely to experience accidents, physical assault, combat, disaster, or to witness death or injury. PTSD can happen to anyone. This is real, this is everywhere.

For this new offering, Jenn Vix worked with Grammy-nominated mastering engineer Chris Gehringer, who is well known in the music industry, having worked with a multitude of music champions like Dua Lipa, Lizzo, Lady Gaga, Twenty One Pilots and St. Vincent.

With her signature vocals and unique timbre, Vix brings her unique brand of postpunk-tinged alt-pop into new territory with a nod to R&B and trap beats programmed by French beat producer Mister Lazy.

“This new track was primarily written about my experience of being diagnosed with PTSD (Post Traumatic Stress Disorder) and what it is like to live with it. I’ve survived SA, homelessness, DV, attempted homicide, and two near fatal illnesses. Though I’ve written about what I’ve gone through, this song is for everyone who has experienced or is experiencing trauma. I deeply empathize with anyone dealing with it. During this pandemic, so many people have experienced intense heartbreak, loss, and other deeply traumatic experiences. I lost two of my friends, and I know many who have lost loved ones, friends, family members, co-workers, and people they saw in their daily lives; before the lockdowns happened,” says Jenn Vix.

Creative, courageous and connected, Jenn Vix knows quite a bit about PTSD – she’s a survivor, her life story underlining her notable perseverance, drive and commitment to music.

Vix got her musical start in Providence, RI, while also getting to know a tougher New York City in her teens, crossing paths with the likes of Iggy Pop, who lived in her mother’s building. While her first experience as a vocalist came with 1980s one-off band Disco Donut (with Adam Horovitz of The Beastie Boys and singer-songwriter Nicole Willis), a decade would pass before Vix broke out on the national scene. Her self-released album received a glowing 3.5-star review in Rolling Stone, who wrote, “Vix sounds perpetually enraptured. And the Rhode Island multi-instrumentalist has reason to be. Her music–clear, simple melodies awash in echo–is all dreaminess and shuddering, and from inside its swirl, her voice wafts up”.

As an indication of her ever-evolving approach to her craft, in recent years, Vix has been performing both as a solo artist and also as a drummer (on an electronic drum kit) and vocalist, in the aforementioned duo Feeney Vix.
Beyond the issue of PTSD, Vix notes that there is help for people undergoing various forms of psychological distress, noting, “I’ve placed links to resources for help; both national and international, under the official music video.  I’ve received a lot help over the years from NAMI, so I’ve also placed a link to their official donation site. I donate to them and I encourage anyone in the US who can donate to them, please help. It is tax deductible, and every donation counts. Thank you.”

“PTSD” will be released on November 5 and will be available online everywhere. Proceeds from this single will be donated to NAMI (National Alliance on Mental Illness), who provide critical mental health resources and support to millions of people across the USA. This single can be ordered at https://music.jennvix.band/ptsd

While you are here, enjoy another of her more recent tracks which involves John Ashton (Psychedelic Furs):

by Aaron Badgley on May 3, 2019
Jenn Vix 6 Umbrella Music Co. 6 is a six-track EP as well as Jenn Vix’s sixth release (hence the title). Vix released an EP last year, Unlocked, and has returned with this inspired mini album, full of [...]

by SPILL NEW MUSIC on December 19, 2017
JENN VIX – “COMPLICATED MAN (INTO THE VELDT MIX)” A Spill Exclusive Video Premiere Today we have the pleasure of presenting you ‘Complicated Man (Into The [...]