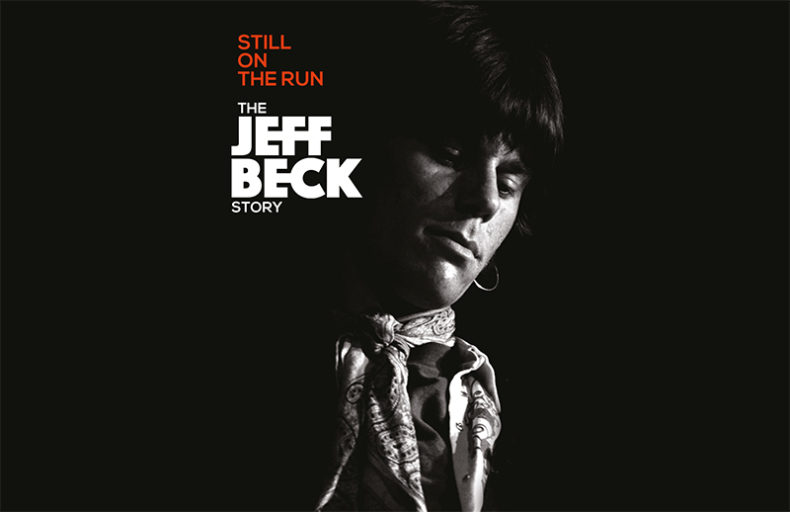 While Jeff Beck has often – and undeservingly – been an understated innovator to the guitar when considered among his peer group, he is an undeniable legend whose influence over the instrument, rock, and the blues, is still heard today. In case there was any attempts to dispute this fact, Still On The Run: The Jeff Beck Story, the latest documentary from Eagle Rock Entertainment, opens with some of rock’s most revered guitar slingers – Slash, Ronnie Wood, David Gilmour, Eric Clapton, and Jimmy Page among others – sharing their own praises for Beck as being not only among the greats, but one of the greatest guitar players and innovators. Over the course of roughly the next hour and a half, Still On The Run: The Jeff Beck Story consists of depth interviews with a wide range of artists who have worked alongside the legend as well as those inspired by him and with Beck himself; ultimately unveiling a layer of the mystique to his storied career.

The documentary seamlessly ties together a series of interviews with a number of different artists who have been greatly influenced by Beck or have worked with him throughout his career. Where many of the interviewed musicians are guitarists – some of the greatest there are – the result is a story that looks at the grander picture that Beck has been crafting for more than fifty years. Within a handful of minutes, the viewer will hear Rod Stewart recant his time working with Beck in the ‘60s on the Truth (1968) and Beck-Ola (1969) records, and then shift to hearing Slash and Joe Perry remember the effect such records had on their own artistry and how they still refer to those albums for inspiration. In such a subtle and effective way, Still On The Run: The Jeff Beck Story ties together a chronology of Beck’s career with how each step contributed to building his legacy.

Naturally, Jeff Beck takes a central role throughout the interviews which only enables further insight to not only his work, but what inspired him. Where Still On The Run: The Jeff Beck Story is a fully authorized biography of Jeff Beck’s work and influence, it makes the most of his involvement, giving the film a sense of having a conversation with Jeff Beck himself, thus making it a truly exciting experience.

Still On The Run: The Jeff Beck Story is an exciting documentary that is an absolute must see for his fans and guitarists of all walks of life. The film perfectly balances interviews with Jeff Beck and other artists along with a carefully and thrillingly curated collection of music – ranging from the vast catalogue of Jeff Beck’s as well as the work from artists who influenced him to challenge all expectations as a guitarist including Miles Davis and Stevie Wonder – to create a compelling narrative that traces Jeff Beck’s career from the very beginning to the present. While many documentaries of this nature can often feel like flipping through a textbook of what has previously been said regarding the subject, Still On The Run: The Jeff Beck Story brings Jeff Beck’s overarching influence over the guitar for the past half a century to center stage in a manner that reaffirms how time and time again, Jeff Beck, the constant pioneer, has transcended rock ‘n’ roll, the blues, and the guitar for the world of popular music and beyond.

A passion for music has always been a part of Gerrod’s life. As a young boy, he was raised on a steady diet of the music from The Chili Peppers, Aerosmith, The Stones, Prince, and others from his mum. Raised in the GTA, Gerrod continued to foster his love for music by attending a wide range of concerts and learning the drums. His unapologetic passion for music has no bounds and has spread to a wide variety of styles, whether it be the 90’s rock that sound tracked his teenage years, the jazz he studied in university, or his newfound love for hip-hop. He recently received his bachelors in music and education from York University and is passionate about writing and reviewing good (and less than good) music. Gerrod is also the drummer and songwriter for a Toronto based rock & roll band, One In The Chamber.
RELATED ARTICLES
eagle rock entertainmentjeff beckmovies