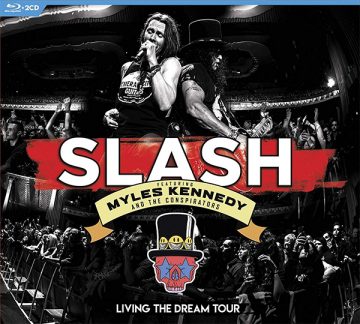 Following a spectacular world tour in support of their 2018 album, Living The Dream, Slash Featuring Myles Kennedy And The Conspirators have released Living The Dream Tour. The live album and film combo perfectly captures the thrill of catching the band live with a massive twenty-two song set, consisting of plenty of old favourites from the last decade of Slash’s solo work and plenty of material from his latest release. Recorded at London’s renown Hammersmith Apollo in February of this year, Living The Dream Tour is a must have concert experience for all fans of the legendary guitarist, but especially those who missed the tour.

Opening with “The Call Of The Wild”, it is immediately clear that Living The Dream Tour will be one of those live records you’ll keep on repeat. Beyond that, the performance from all musicians on stage is simply top notch. As I said after seeing the band last October on this tour, this is an incredibly tight rock outfit performing at a definite peak in their careers as they effortlessly plow through a set largely comprised of songs from Slash’s last four studio albums. With hits and favourites like “Halo”, “Starlight”, “World On Fire”, and “You’re A Lie”, the band also performed half of Living The Dream, including “Driving Rain”, “Mind Your Manners”, and “My Antidote”. The band also jammed on a number of tracks, giving Slash a chance to deliver a handful of lengthy, jaw dropping solos, most notably being the astounding, near seven minute solo over an extended “Wicked Stone”.

Among the staggering tracklist are a handful of definite highlights that stand out from an already strong lineup. The first comes from among the first collaborative tracks between Slash and Kennedy from 2010, “Back From Cali”. The emotionally heavy power ballad is as exciting live as it is on the original album and singlehandedly justifies why despite all the collaborators on 2010’s Slash, Kennedy and Slash have remained an incredible duo, even almost a decade later. Bassist Todd Kerns also brings an interesting shift when he takes lead vocals for “We’re All Gonna Die”, originally sung by Iggy Pop, and “Doctor Alibi”, originally sung by Lemmy Kilmister. Later, the band blasts through an explosive rendition of Guns N Roses’ “Nightrain” which very well could have been the end of the set however, with a few songs in between, Living The Dream Tour concludes with the even bigger “Anastasia”. With yet another extended solo section towards the end of the track, Slash, Kennedy and co. truly bring the night to a close.

It has been decades since Slash has actually had to prove his worth. Between Guns N Roses, Velvet Revolver, and his growing body of solo material, Slash always delivers. While Living The Dream Live is no different, it is worth pointing out that the energy, endurance, style, and sheer talent heard on this live album is that of an artist consumed by passion for his craft with a hunger to once again prove his status among rocks most revered guitarists. Not only is the album fantastic, but the film component adds a truly exciting addition to the release. Not one to sit still for long, Living The Dream Live leaves me very much looking forward to where Slash will go next, and what the future holds for his collaboration with Kennedy and The Conspirators.

A passion for music has always been a part of Gerrod’s life. As a young boy, he was raised on a steady diet of the music from The Chili Peppers, Aerosmith, The Stones, Prince, and others from his mum. Raised in the GTA, Gerrod continued to foster his love for music by attending a wide range of concerts and learning the drums. His unapologetic passion for music has no bounds and has spread to a wide variety of styles, whether it be the 90’s rock that sound tracked his teenage years, the jazz he studied in university, or his newfound love for hip-hop. He recently received his bachelors in music and education from York University and is passionate about writing and reviewing good (and less than good) music. Gerrod is also the drummer and songwriter for a Toronto based rock & roll band, One In The Chamber.
RELATED ARTICLES
album reviewalbum reviewseagle rock entertainment
9.0