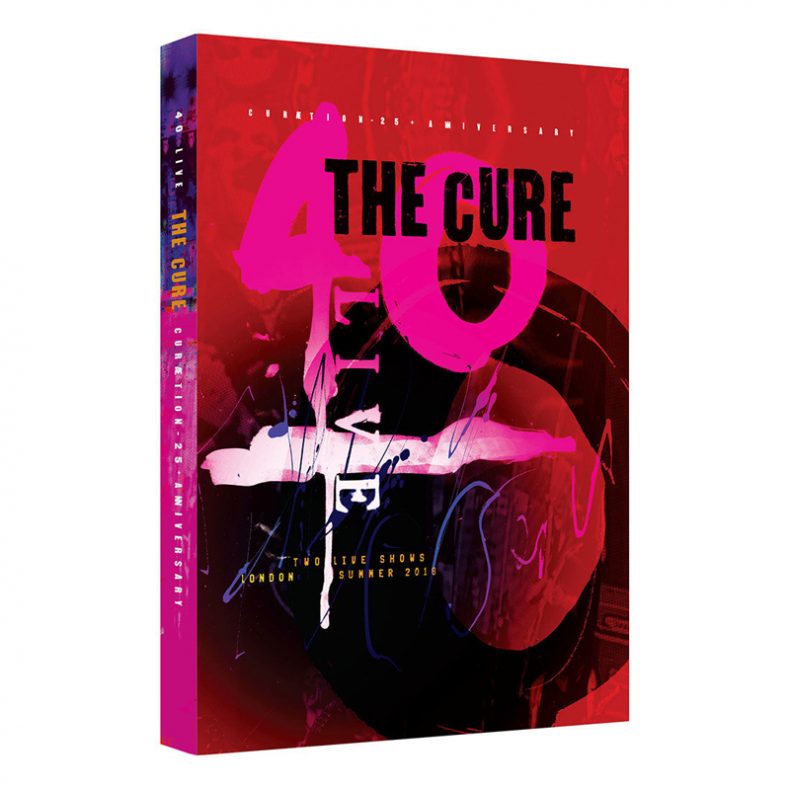 Celebrating 40 years of music as well as their recent induction into the Rock and Roll Hall of Fame, The Cure has released a special 2-disc set celebrating their illustrious career. 40 LIVE – CURÆTION-25 + ANNIVERSARY is a collection any die-hard Cure fan will want to display proudly and watch regularly.

The collection includes two concert experiences. The first disc, CURÆTION-25: From There To Here | From Here To There, was filmed on the final night of the 25th Meltdown Festival, which was curated by Cure singer Robert Smith, at London’s Royal Festival Hall in June of last year. In this performance, The Cure entertains the crowd by playing a hit song from each of their 13 studio albums in chronological order – a great way to show off the evolution of the band’s music and style.

Having never been the ones to conform to tradition, midway through their set, The Cure dove into a few unreleased tracks adding variety to the mix and showing fans a sign of things to come. They played songs like “It can Never be the Same Again” and “Step into the Light” hinting to fans of what is yet to come before switching gears back to their regularly scheduled program. This performance is one for the long-term fans, a trip through memory lane for those who have been Cure fans from the very beginning and who would remember when classic songs like “A Strange Day” was released back in 1982.

The second disc, ANNIVERSARY: 1978-2018 Live In Hyde Park London, is The Cure’s anniversary concert performed for a crowd of 65 000 fans at one of London’s Royal Parks on July 7, 2018. Another deep dive into their 40–year career, this performance features more of their commercial hits such as “Lovesong”, “Friday I’m in Love”, and “Boys Don’t Cry”. This performance is lively and energetic – you get a great sense of how Smith, with his signature mad scientist hair, and bandmates Simon Gallup, Jason Cooper, Roger O’Donnell, and Reeves Gabrels are able to interact with their fans and let loose on stage.

Both performances exceed two hours in length which makes this collection a full evening’s worth of celebrating The Cure’s music. For life-long fans, this is the perfect night in.

Samantha is both a writer and a fan of the arts and has been able to find numerous ways to pair the two. Eager to dive head first into writing for Spill, Samantha is an avid partaker and reviewer of live art in Toronto serving as an editor at Mooney on Theatre exploring live local theatre, she's a photojournalist for Go Globehopper, a travel, dining and tourism blog that focuses on Toronto and abroad and previously for Lithium Magazine. She's passionate about music, theatre, photography, and writing -- not necessarily in that order. She drinks tea more than coffee, prefers ciders over beers, and sings karaoke way too loudly. You can follow her on various social media including Facebook, Twitter, and Instagram.
RELATED ARTICLES
eagle rock entertainmentfilm reviewrobert smith
8.0

by Gerrod Harris on May 18, 2018
SPILL MOVIES: STILL ON THE RUN: THE JEFF BECK STORY EAGLE ROCK ENTERTAINMENT – May 18, 2018 While Jeff Beck has often – and undeservingly – been an understated innovator to [...]