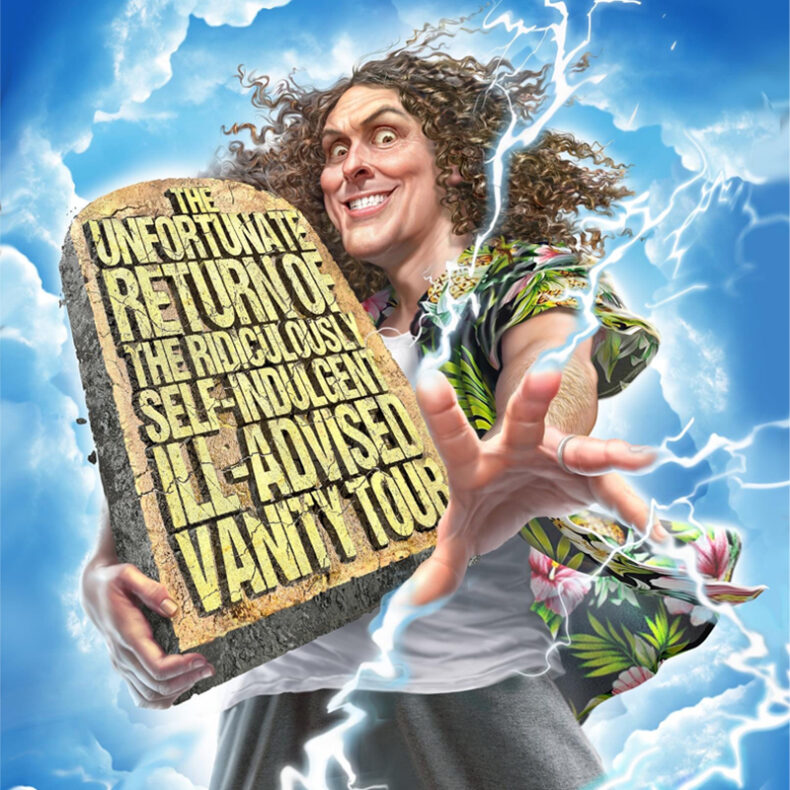 @ THE CENTRE FOR PERFORMING ARTS, VANCOUVER

There were plenty of Hawaiian-style button lounge shirts amid the spectators, in homage to Alfred Yankovic’s synonymous attire. Additionally, there were plenty of wacky cosplay costumes, including numerous yellow Devo-style hooded “bunny suits” and a man with a matching “talking” ventriloquist doll on his arm. It was a festive atmosphere, to say the least!

Opening for “Weird Al” for all 133 North American dates is stand-up comedian Emo Philips. Philips appeared in the 1997 tv series “The Weird Al Show” and the 1989 “Weird Al” oddball comedy UHF, which was a box-office flop at the time, but has since become a cult-classic. Philips engrossed the crowd with his trademark dark humour, delivered in his slow, wandering, child-like fashion. Philips delivered a great set of witty, original comedy. Philips was indeed a perfect warm-up for the abdominal muscles, which were bound to get a good workout on this night.

“Weird Al” Yankovic’s long-time band consisting of Jim West (guitar), Steve Jay (bass), Jon Schwartz (drums) and “new guy” since 1991 Rubén Valtierra (keyboards) opened the show with the UHF instrumental “Fun Zone” and then “Weird Al” joining in and beginning the show with a very mellow, intimate, lounge vibe. No props, costumes or video screens with most of the band sitting. A much different atmosphere from the visual extravaganza that was the “Strings Attached Tour”.

“Weird Al” and band focused on older original music, for the most part. This included comedy classics such as “Dare To Be Stupid”, “Dog Eat Dog”, “UHF”, “Nature Trail To Hell”, “Melanie” and “You Don’t Love Me Anymore”. There was also an interjection of heavy, rocking numbers, including “I’ll Sue Ya”, “Young, Dumb & Ugly” and “When I Was Your Age”. Intermittently, they launched into Smash Mouth’s “All Star”, teasing the cover which would be played later on in the night. Part way through the night, “Weird Al” brought out the accordion with seeming apprehension, as although it is his trademark instrument, it really wasn’t missed to that point as Al and company had the audience eating out of their hands. “Weird Al” touched on the upcoming biopic Weird: The Al Yankovic Story starring Daniel Radcliffe, claiming that his next movie would be in 2055 as he releases one every 33 years. One of the many highlights was the 1999 fan favourite, George Thorogood inspired, “Albuquerque”, which was nearly 15-mins long with the hilarity of numerous additions, specifically the plethora of berry donut options in the inspired tune, which seemed like it would never end, but sadly it did, and was the last song of the set.

At the conclusion of the concert, “Weird Al” pretended to cluelessly check out messages on his phone at the side of the stage while Schwartz cleaned his drumming booth with a cloth, as the audience cheered for more. Eventually, the quintet pretended to be surprised by the cheering fans and returned to their positions and delivered a full-length energy-filled version of “All Star” (it’s hard to imagine Smash Mouth doing it better). The final song of the night was a spectacular montage of song parodies “Amish Paradise”, “Smells Like Nirvana”, “White & Nerdy”, “Word Crimes” and “Yoda”. This was done in the spirit of “Weird Al’s” polka mash-ups which appear on most of his albums.

“Weird Al” and company were on point all night. Their precision musicianship was on full display with nearly two hours of songs and banter that had a marvellous energy throughout. “The Unfortunate Return Of The Ridiculously Self-Indulgent Ill-Advised Vanity Tour” is not to be missed.

John Graham is a Vancouver-area resident who typically spends most days admiring music of all genres. When not listening to music, John is usually at a live show, somewhere in the bowels of Vancouver.
RELATED ARTICLES
"weird al" yankoviclive reviewvancouver