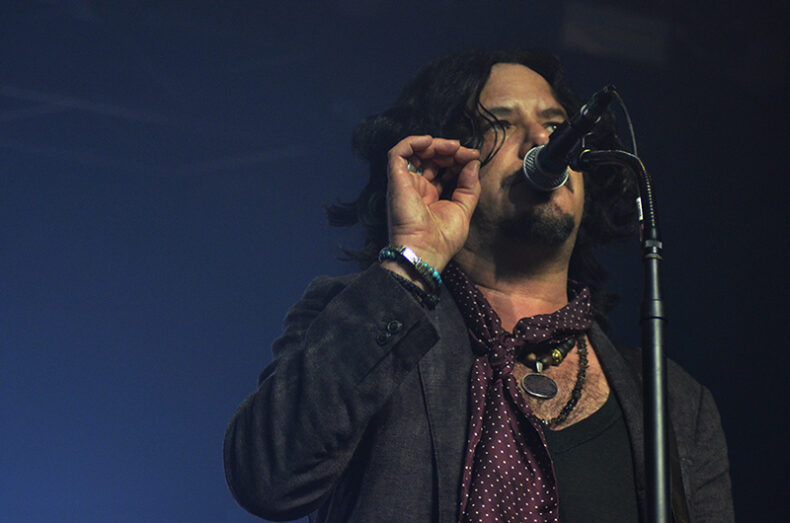 The quintessential way to celebrate Canada Day as a fan of rock music has to be seeing Windsor natives The Tea Party return to the stage after a long and arduous lockdown. They did just this during Canada Day weekend at the History venue in Toronto. Playing a selection of fan favourites, the best of the best from The Tea Party’s repertoire, the trio had the crowd mesmerized with their performance peppered with select classic rock interludes.

They kicked off the night with “The River” with a snippet of Tool’s “Sober” to set the energy of the venue in high gear and immediately followed by “The Bazaar”. This is what fans of The Tea Party have been looking for; a reminder of their signature intoxicating blend of traditional rock meets Middle Eastern flare. This unique atmospheric sound that beckons of distant lands like incense on the wind.

The Tea Party released their latest EP, Sunshower, the year prior but, surprisingly, they didn’t include any of their newer music into this evening’s performance opting to favour their classics instead. This seemed like the best choice for a return performance as the crowd absolutely loved the return of their favourites from the band’s 30 year legacy.

Always the magnetic and enigmatic front man, Jeff Martin was in fine form to entertain the crowd not only with his voice and impressive musicianship with numerous guitar changes, but also with humorous tongue and cheek commentary. He asked the crowd if anyone had ever tried ayahuasca as he had while composing. Later in the show, he recalled a story of people on social media accusing The Tea Party of being involved in devil worship and black magic, stating that they would absolutely never be ones to lead people into temptation before launching into the song.

Other highlights of the evening include this proud Canadian moment where they included a nod to the late great Gord Downie of The Tragically Hip by including an interlude of “Bobcaygeon” into the performance of “The Messenger”. For their performance of “Heaven’s Coming Down” featuring a nod to U2’s “With or Without You”, Martin swapped his guitar out for an impressive double neck letting the crowd know that as exciting as it is to see this beast of an instrument, his chiropractor would be getting a call from him shortly.

The Tea Party closed out the night with the instrumental number “Winter Solstice” before signing off on a high note with “Sister Awake” that also featured throws to The Rolling Stones’ “Paint It Black” and David Bowie’s “Heroes” – a proper send off for one impressive night of Canadian music.

Samantha is both a writer and a fan of the arts and has been able to find numerous ways to pair the two. Eager to dive head first into writing for Spill, Samantha is an avid partaker and reviewer of live art in Toronto serving as an editor at Mooney on Theatre exploring live local theatre, she's a photojournalist for Go Globehopper, a travel, dining and tourism blog that focuses on Toronto and abroad and previously for Lithium Magazine. She's passionate about music, theatre, photography, and writing -- not necessarily in that order. She drinks tea more than coffee, prefers ciders over beers, and sings karaoke way too loudly. You can follow her on various social media including Facebook, Twitter, and Instagram.
RELATED ARTICLES
historylive reviewthe tea party

by SPILL NEW MUSIC on July 21, 2022
THE BEACHES – “GROW UP TOMORROW” INDEPENDENT The Beaches have dropped their brand new single, “Grow Up Tomorrow”. The song was co-written with Lowell and is [...]