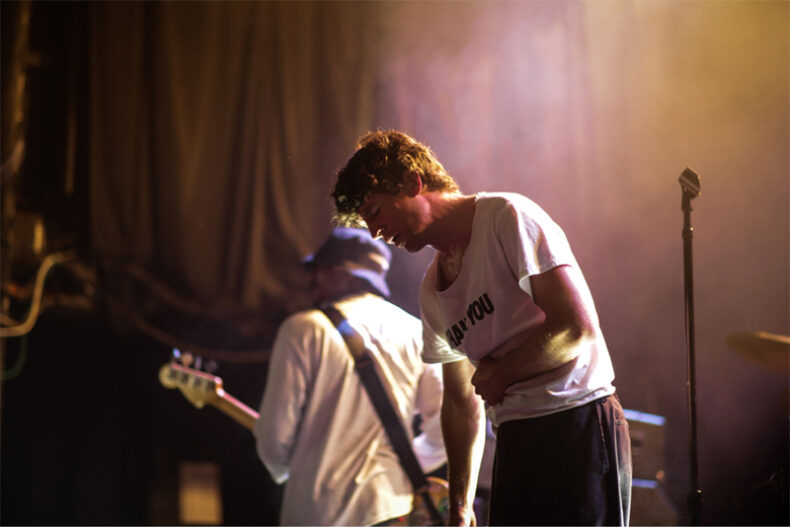 Something about tonight’s show at the Phoenix was magical. Turnstile has been gaining traction since the release of their third album, Glow On. With the sound taking on a slightly less ‘punky’ tone then previous EPs, it appealed to a wider audience and landed them gigs on shows like Late Night with Seth Meyers as well as Late Night With Jimmy Fallon. This past week, they packed the Phoenix Concert Theater with a sold-out crowd and did not disappoint.

While Turnstile could have taken all the glory, they shared the stage with four opening acts including Truth Cult, Ekulu, Citizen, and the beloved Californian band Ceremony. The first two certainly set the tone for a great show, but it was Citizen who got concert-goers engaged and ready to rock. Playing mostly fresh songs off their 2021 album Life In Your Glass World, they sprinkled in a few older classics like “The Summer”. Later, Ceremony packed a punch with a killer set bringing a very Smiths-esque energy to the stage and below, engaging with the front row and encouraging them to sing into the mic.

As the crowd waited for Turnstile to set up, bassist Franz Lyon signed audience posters. Leading up to the set, Whitney Houston’s “I wanna dance with somebody” played–pairing well with the very humble and community-driven environment Turnstile has created. As they took the stage, the crowd roared with anticipation. The band did not keep concertgoers waiting and jumped right into “Mystery”, and then straight into Glow On’s popular second track “Blackout”.  Although the band kept to the tunes and away from chit chat on stage, lead singer Brenden Yates made sure everyone was alright during the more hardcore moments in the mosh. By the end of the hour-long set, the band dove into fan favourite, “T.L.C (Turnstile Love Connection)”. Shouting the lyrics ‘I want to thank you for letting me be myself’ felt like a love letter to the then very sweaty crowd.

As the show came to an end, a security guard unfamiliar with any of the bands that night said it was one of the most accepting musical environments he’s experienced, and I’d completely agree. Not only a must-see act, but Turnstile is also a live experience one must make a point to be a part of.

SPILL WRITERS strive to keep our readers up to date with news and events in the music industry. We keep you informed of the most recent information regarding new releases, tour dates, and information items about your favourite artists.
RELATED ARTICLES
ceremonylive reviewthe phoenix concert theatre
8.0

by Dan Kennard on March 6, 2020
Phantogram Ceremony Universal Music Lifelong friends Josh Carter and Sarah Barthel, otherwise known as Phantogram, have returned with their first album since 2016, Ceremony, and while it is [...]

by Michael Mitchell on January 27, 2020
CEREMONIES IN THE SHADOWS A CONVERSATION WITH LUIS NAVARRO & JOEL NIÑO, JR. OF TWIN TRIBES Even though the new album has only had [...]
10