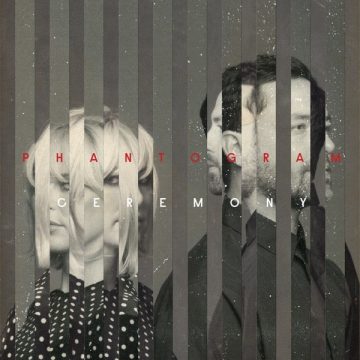 Lifelong friends Josh Carter and Sarah Barthel, otherwise known as Phantogram, have returned with their first album since 2016, Ceremony, and while it is largely heavy-hitting electronic pop with a few softer songs on the back end, this collection is dark and melancholy when you put your ear close to it and reflects a world that is fractured and uncertain, a world where every mirror is cracked so that nothing can ever be seen clearly. I probably don’t need to tell you, but a lot has happened since 2016, for the world, but also for Barthel, too, and this album, in many ways, reflects the instability of life that we are reminded of in these strange times.

A bit of backstory goes a long way here, as Barthel recently posted a letter on Twitter discussing the loss of musicians and family through suicide, saying “in one way or another, if it was on purpose or on accident, all of my heroes were gone leaving me…it was one tragedy after the next from suicides, overdoses, school shootings, festival shootings, etc.” Thus followed a period of personal struggle as the band searched for its own purpose, before a move to Laurel Canyon allowed them the change of scenery and space to think that would go on to produce the tracks on Ceremony. As she states at the end of her post, “Ceremony was inspired by self-care and seeing how common of a struggle everyday life had become. What is life after suicide? How do we move forward?”

In some way or another, these songs attempt to provide answers, or at least emotional expression, to many of those concerns. The first half of the album features the dark, beat-heavy electronic pop that has defined the band for some time. Opening track “Dear God” has a funky, hooky opening and “In a Spiral” clearly reflects some of the aforementioned struggles of Barthel’s (and our own) emotional life. “Love Me Now” is another great track featuring searing, fuzzed out guitar rips and “Let Me Down” is chaotic as fuzzy speakers seem to blink like a strobe light, and low beats rumble as Barthel’s voice swirls. “News Today” is a warbly song with voice filters and echoes, a track where words stall out, where everything seems to be buffering and discordant.

The last few tracks, starting with “Glowing”—a beautiful, touching ballad—reveal a shift in tone, and represent something like emotional progress, or, perhaps more likely, just simple exhaustion from all the very real drama of the world around us. In the end, it’s probably a little bit of both, and that’s something a lot of listeners will be able to relate to.

Dan Kennard is an English teacher and fiction writer living outside Kansas City, Kansas where he lives with his wife and children. More about his work can be found at amazon.com/author/dankennard. You can also follow him on Twitter and Instagram @kennardistry or contact him at [email protected]
RELATED ARTICLES
album reviewalbum reviewsceremony
8.0