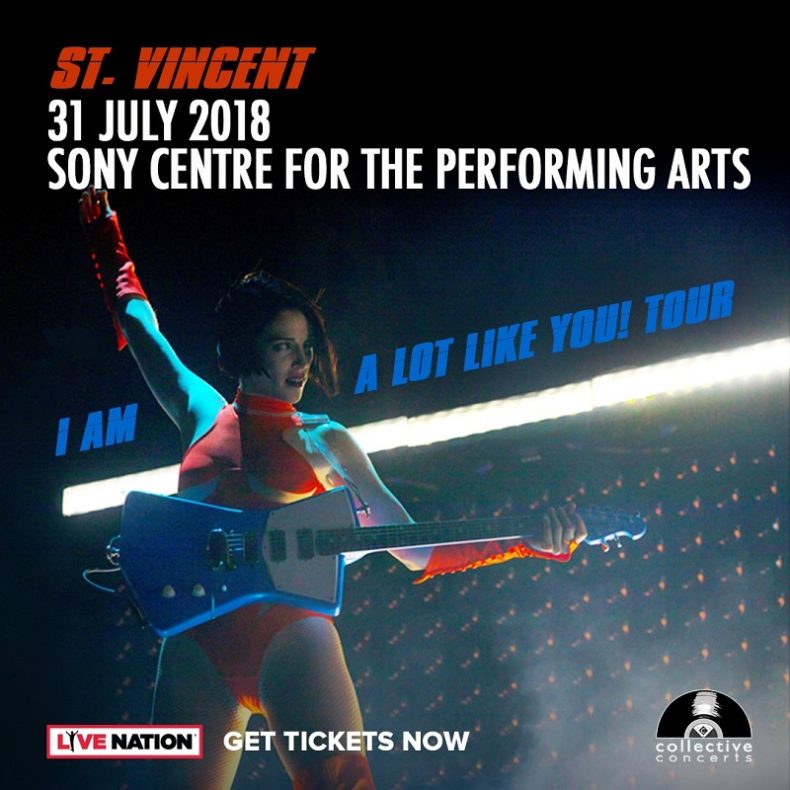 St. Vincent, the creation of Annie Clark, is as compelling an enigma as is imaginable in modern music; much like the three statues adorning the front façade of the Sony Centre for the Performing Arts, all angles and curious construction open to interpretation, Clark has set about to be nothing short of true to her own unique artistic vision, and as such is equally challenging to nail down. While her stage persona and associated publicity related to the ‘Fear the Future’ tour may have been enigmatic and carefully constructed, there is a clear intimacy and vulnerability to Clark when performing live; she is a creature of very real and genuine emotion, and that translates in a truly authentic way to her live performance and to her audience.

Following a no-nonsense DJ set by Toronto-based DJ Blush, St. Vincent took the stage in an equally no-nonsense manner, with the male musicians in brown boiler suits, face masks and blonde wigs, bassist Toko Yasuda adorned in long braids, and Clark all but strutting on stage in high leather boots and themed orange attire. There was no small talk, just a straight ahead launch into a host of the band’s more fiery and up-tempo songs with the stage going black between each song and Clark receiving, somewhere in the dark, a different and uniquely tuned, not to mention brightly-coloured, guitar for each new song. I counted at least six different guitars, ranging in colour from grey to gold and green to pink, each one Clark’s custom Ernie Ball Music Man model.

Over a twenty song set, Clark showed not only that she can absolutely shred a guitar solo, but also that she has a very impressive vocal range supported by a very tight performance from the band; here is a group that knows how to put on a show and sound almost empathically linked at times. Though the show ended with some of the band’s most tender songs, including “Happy Birthday Johnny” it was the up-tempo guitar and synth driven efforts that were the standouts, especially “Digital Witness” and “Fear the Future”. There was also a very humourous offering from Clark as she attempted unsuccessfully (and yet endearingly) to alter the words of “New York” to suit Toronto.

St. Vincent has proven with this performance that they are a band at the height of their powers in terms of their ability to put on a dynamic and memorable live show. With still three months in the tour remaining, there will no doubt be a great many more audiences left feeling moved and entertained in equal measure.

Br. lives in southern Ontario, grew up on The Beatles and The Journeymen, spent his adolescence immersed in grunge, and his adulthood in British alternative. His greatest joy is seeing his son dance and grow into his own appreciation of the indescribable joy of music...
RELATED ARTICLES
live nationlive reviewst. vincent