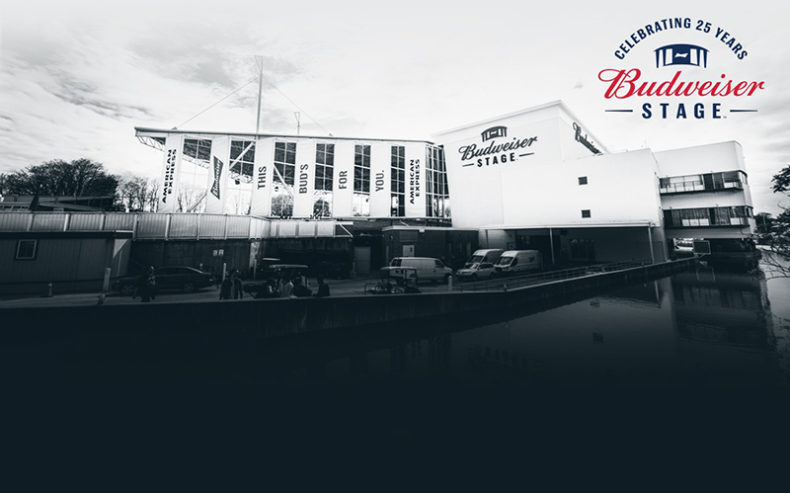 @ THE LOUNGE AT LIVE NATION, TORONTO

This morning the Live Nation Lounge, located in the heart of Toronto’s Liberty Village, was abuzz with members of the local music industry and media gathering to celebrate what will be the 25th concert season for the city’s iconic Budweiser Stage. Hosted by Live Nation’s Erik Hoffman, Riley O’Connor, and Joey Scoleri, along with Labatt Brewery’s Todd Allen, and a special appearance from Canadian music royalty Jim Cuddy, the conference shone a spotlight on one of Toronto’s most integral concert venues, highlighting why their 25th season will be an even more exciting affair.

“I’ve been to the Hollywood Bowl. I’ve been to Red Rock; and the Budweiser Stage is right up there.” Scoleri, the afternoon’s MC explains, “This is one of Canada’s and North America’s most iconic venues”. The statement rings true for everyone in the room. It’s hard to live in Toronto without having a good memory associated with the Budweiser Stage. Personally, my very first show at the venue, which was then called the Molson Canadian Amphitheater, was Aerosmith  in 2006, and of all the concerts I would see there since, Soundgarden’s 2012 reunion show and Prophets Of Rage’s 2016 concert which Dave Grohl crashed, were definite highlights. Whether you remember it as a part of Ontario Place or as The Molson Canadian Amphitheatre, The Budweiser Stage is certainly among Toronto’s most consistent venues in not only delivering top of the line entertainment, but also bringing people together. This sentiment was only furthered by a brief appearance from Cuddy, who spoke of fond memories of his father, children, and other musicians, all of which centered around Blue Rodeo’s ongoing and regular presence at the venue, having performed almost yearly at The Budweiser Stage.

After listing off some truly impressive stats – the venue has hosted over eight million attendees and is frequently voted as  fans as well as artists and crews’ favourite – Live Nation Toronto President Eric Hoffman took the podium to discuss the upcoming summer season. He listed a wide range of improvements and additions to The Budweiser Stage in preparation for what is gearing up to be a massive summer, including better pick-up and drop-off zones, improved wi-fi, and a new sound system for the lawn. Most importantly, he focused on the idea of creating a better pre and post show atmosphere with a revamped River Bar, where local up and coming talent will cut their teeth before and in between sets of the main show, and a rooftop lounge overlooking Lake Ontario. In preparation for the coming season, Allen added that Budweiser will be offering unpasteurized beer to be shipped to the copper tanks at the venue to ensure that only the freshest beer is being served along with the newly announced It Happened Here, an interactive pop-up exhibit running from April 25 to May 4 at 950 Queen Street West. The photo exhibit will focus on the rich history the venue has focusing on some of the world’s greatest entertainers and performers, with all proceeds going towards MusiCounts.

Bringing it back to the music, Hoffman seemed quite excited for what is to come. As of now, just over 35 shows have been announced with many more on the way, ranging from the likes of two highly anticipated Alexisonfire shows, to Florence + The Machine, Blue Rodeo, Smashing Pumpkins with Noel Gallagher, and for his Budweise Stage debut, Corey Hart. He was also proud to break the news that none other than The Strokes would headline their Kick Off Concert May 20. Beyond this, he ensures that Live Nation will continue to diversify their lineups and broadening the genres of artists in which they book as he suggests they will expand into Latin and comedy.

Speaking to Hoffman, O’Connor, and Scoleri following the press conference, it seems the general consensus is the need to support Canadian content. Perhaps now, more than ever, there has never been such a strong push for the creative arts in Canada. While the world slowly wakes up to all the great work Canadian artists are regularly putting out there, it truly is great, and to be quite honest thrilling, to see Live Nation, the world’s largest entertainment promoter, taking such an interest in established and up and coming Canadian talent. Between the emphasis placed on The River Bar and Live Nation’s new Ones To Watch series where they showcase some of the hottest independent and up and coming artists with monthly performances at The Lounge At Live Nation as part of their Northside Sessions which draws attention only to Canadian artists, both O’Connor and Hoffman assured that this season would feature the most Canadian talent at The Budweiser Stage. As always, a trip to The Budweiser Stage is bound to be a great time, sometimes even a summer highlight, and with Live Nation and Labatt Brewery continuing to enhance the fan experience, things can only continue to get better.

A passion for music has always been a part of Gerrod’s life. As a young boy, he was raised on a steady diet of the music from The Chili Peppers, Aerosmith, The Stones, Prince, and others from his mum. Raised in the GTA, Gerrod continued to foster his love for music by attending a wide range of concerts and learning the drums. His unapologetic passion for music has no bounds and has spread to a wide variety of styles, whether it be the 90’s rock that sound tracked his teenage years, the jazz he studied in university, or his newfound love for hip-hop. He recently received his bachelors in music and education from York University and is passionate about writing and reviewing good (and less than good) music. Gerrod is also the drummer and songwriter for a Toronto based rock & roll band, One In The Chamber.
RELATED ARTICLES
blue rodeobudweiser stagejim cuddy

by SPILL NEWS on December 5, 2021
BLUE RODEO’S FIRST ALBUM IN FIVE YEARS – MANY A MILE BAND ANNOUNCES 2022 CROSS-CANADA TOUR Today, Canadian music icons Blue Rodeo release their 16th studio album and first in over five years, Many A Mile (LISTEN HERE). Ahead of the album [...]

by SPILL NEWS on March 5, 2021
GREG KEELOR ANNOUNCES NEW ALBUM SHARE THE LOVE WITH VIDEO FOR THE FIRST SINGLE “WONDER” Greg Keelor – the revered musician and songwriter and co-founding member of the iconic Blue Rodeo – has announced that his sixth solo album, [...]

by Gerrod Harris on May 7, 2019
IT HAPPENED HERE: CELEBRATING 25 YEARS OF THE BUDWEISER STAGE Following a successful joint press conference between Live Nation Canada and Budweiser Canada, the 25th anniversary celebrations for Toronto’s Budweiser Stage continues ahead of their [...]
8.0

by Bryan Williston on April 27, 2018
Greg Keelor Last Winter Warner Music Last Winter is the fifth solo effort from Blue Rodeo co-frontman Greg Keelor, and it is surprising in its tone and artistry. Blue Rodeo fans, please set your yearning for that classic country-rock sound [...]
7.0