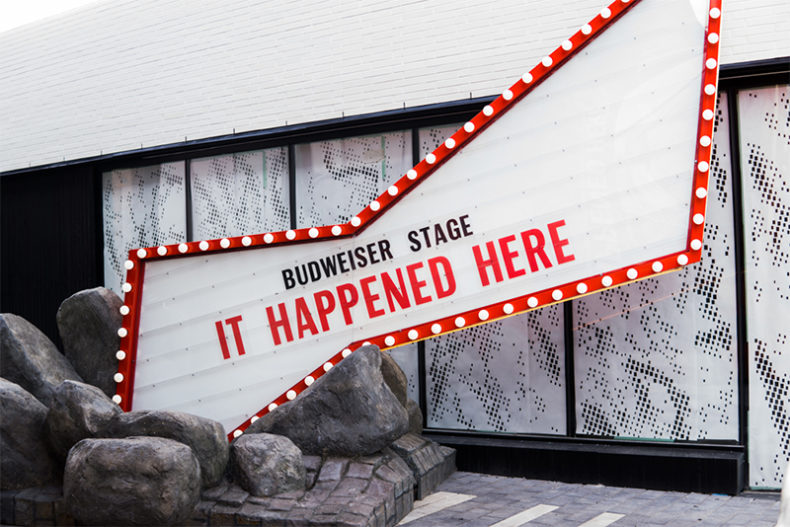 IT HAPPENED HERE: CELEBRATING 25 YEARS OF THE BUDWEISER STAGE

Following a successful joint press conference between Live Nation Canada and Budweiser Canada, the 25th anniversary celebrations for Toronto’s Budweiser Stage continues ahead of their upcoming summer concert season. While they previously boasted an impressive lineup – kicking off with The Strokes on May 20 – along with improvements to the venue and opportunities to develop up and coming Canadian talent, Budweiser and Live Nation have opened their interactive exhibit, It Happened Here. The pop-up gallery, running from April 25 to May 4 at 950 Queen Street West, celebrates twenty-five years of concerts captured from behind the lens of countless talented photographers. While admissions are free, fresh Budweiser will flow from the tap with all proceeds going towards MusiCounts – a music education charity providing access to musical instruments and programs in communities across Canada. Ultimately, It Happened Here not only succeeds in building the excitement of the upcoming concert season, but is a reminder as to how essential The Budweiser Stage is to the North American tour circuit, Toronto, and some of the best parts to your summer.

Upon entering the two story exhibit, you’ll be greeted by friendly staff, a bar, and energetic music. As you venture through, the walls are completely adorned with the incredible photography of David Leyes, Lucia Remedious, and Tom Pandi. Their collective work includes shots of rock titans such as David Bowie, Aerosmith, and Eric Clapton, pop and hip-hop superstars including Prince, Selena Gomez, Mac Miller and Outkast, alternative icons like The Red Hot Chili Peppers, Marilyn Manson, and Rob Zombie along with funk, blues, and soul legends the likes of Buddy Guy, James Brown, and Tina Turner, among many, many others. A number of Canadian artists are also featured, including Bryan Adams – who was the very first artist to perform at the esteemed venue – Shania Twain, Neil Young, Drake, and The Tragically Hip – who were the only act framed in an antique gold frame.  Their work is fantastic and is sure to ring as nostalgic and intriguing for everyone. Beyond the photos, fans will also be treated to a series of set lists, VIP lanyards, guitars, signed drum heads, amps, and a series of stellar artwork depicting the artists confirmed for the upcoming season.  There are also a handful of three dimensional photographs, including Kiss, Alice Cooper, and Dave Grohl in his notorious throne from 2015, all of which make the memories that much more larger than life.

There are also a number of interactive pieces which make for a more immersive experience. One booth features a working microphone placed in front of a wall sized photo of a sold out audience at The Budweiser Stage for you to pose in front of as if you were on stage. Similarly, there is a wall of hands for one to lean against to replicate surfing the crowd. The basement level also features a collection of bathroom stall doors and sharpies for visitors to leave messages behind. Like the grimiest of clubs, the typical gospels of any restroom stall could be found along with numerous tributes to artists still touring – The Rolling Stones – and to those who’ve passed – David Bowie and Prince (with one reading “Prince 4 Ever” beside his love symbol) – and even local bands (“One In The Chamber Rules”).

The It Happened Here Exhibit truly makes for a great addition to your evening. Whether you’re reliving concerts from the past quarter of a century or simply interested in seeing how integral The Budweiser Stage, and to a greater extent, Toronto is to the international tour circuit, It Happened Here is a fun and exciting experience. With just weeks before the May 20th kick off concert with The Strokes, this exhibit will certainly get you pumped for the 2019 concert season!

A passion for music has always been a part of Gerrod’s life. As a young boy, he was raised on a steady diet of the music from The Chili Peppers, Aerosmith, The Stones, Prince, and others from his mum. Raised in the GTA, Gerrod continued to foster his love for music by attending a wide range of concerts and learning the drums. His unapologetic passion for music has no bounds and has spread to a wide variety of styles, whether it be the 90’s rock that sound tracked his teenage years, the jazz he studied in university, or his newfound love for hip-hop. He recently received his bachelors in music and education from York University and is passionate about writing and reviewing good (and less than good) music. Gerrod is also the drummer and songwriter for a Toronto based rock & roll band, One In The Chamber.
RELATED ARTICLES
blue rodeobudweiser stagefeatures