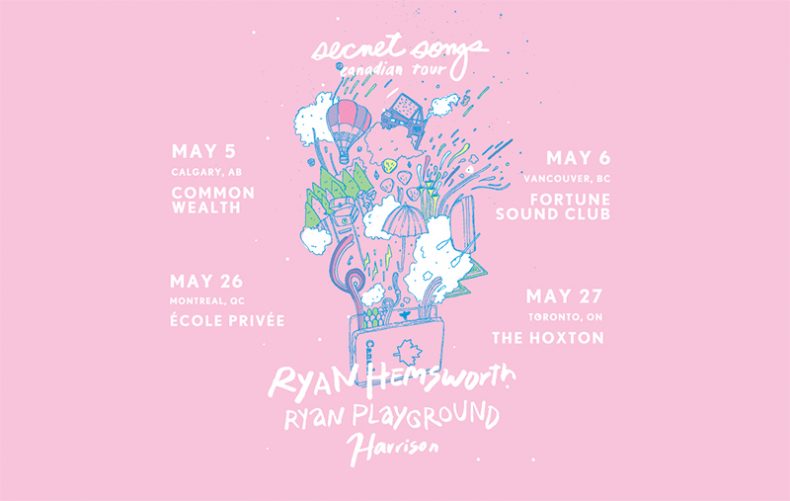 The night goes off without a hitch as we head straight in the doors under the neon sign directing us into The Hoxton. After a quick frisk and a comical incident with some drunk girls trying to sneak in not one but five bottles of booze and slurring “it’s my birthday!,” before spilling some on the security guard and stumbling down the stairs with her friends as they are escorted out. Harrison, the first DJ, is onstage playing a variety of chill electro as the crowd slowly fills in and the audience up by the stage chats and dances along to the transient tunes. We head to the bar; I realize that if you want to drink you better bring your fat cat wallet with you. At $10 for a Coors can and $9 a shot the money burns quickly for the evening. The party girls don’t look so silly anymore, we laugh. After about what seems like an hour-long set the initial DJ finishes as the next one joins the stage and begins to transition the sets. I step out for a quick smoke and prep my camera during the switch.

Once back inside the vibe of the room is a lot more engaged. The next DJ known as RYAN Playground plays a lot more bass-heavy songs with a few rap trap tracks tossed in for good measure. She brings her A-game as she looks is very engaged with the songs being played, singing and dancing along. The crowd was thrilled by an odd yet intrigue ing slowed-down version of Blink 182’s “ All the Small Things.” Her entire hour-or-so-long set goes off well and is fitting for The Hoxton with a majority of the crowd bumpin’ and moving. The LEDs flash and flicker across the audience jumping up and down. She throws in a Zelda theme remix and a Rugrats theme remix for the full ‘90s nostalgia throwback that the crowd goes wild for.

After an energetic bass-fueled dance off the much-anticipated Ryan Hemsworth hits the stage. They trade off and the now-full front of The Hoxton cheers him on. Having seen him a few times before, his stage presence has improved greatly. He closes his eyes and grooves along to the set as a humble smile falls across his face. He dances over to the electronic turntables and gestures along to all the hooks and drops. His musical stylings create a light mystifying electronic trance that sweeps across the room. He plays some of his more well-known tracks like “Surrounded,” but mixes it up with some lesser-known artists and some remixes on classics songs like Sum 41’s “In Too Deep.” A mix of old and new tracks pleases fans all around. The set has a smooth flow that transitions between songs almost unconsciously, with a few applause breaks tossed in for good measure.

He keeps the crowd with him throughout the night as fans sway along beside one another. This went on from beginning to end as cheers of delight came over recognized and loved songs. He plays his final few songs as the now morning comes to a close. The crowd gives one final bellowing cheer as he thanks the room and leaves the stage. The lights go on a few minutes later and people begin to pile back out to the streets of Toronto. If you’re a fan of the EDM scene this lineup mashes a variety of styles that will be sure to make you dance along. This concludes the Canadian stretch of Ryan Hemsworth: Secret Songs Tour as it continues to the states starting June 10 at the Bonanza Campout, Heber City, Utah.

by Nicholas Fazio on August 5, 2016
BOILER ROOM SETS AND VIDEO GAMES AN INTERVIEW WITH HARRISON Toronto DJ and producer Harrison dropped out of university after a three-month stint to pursue a career in music; a career that was put in motion [...]