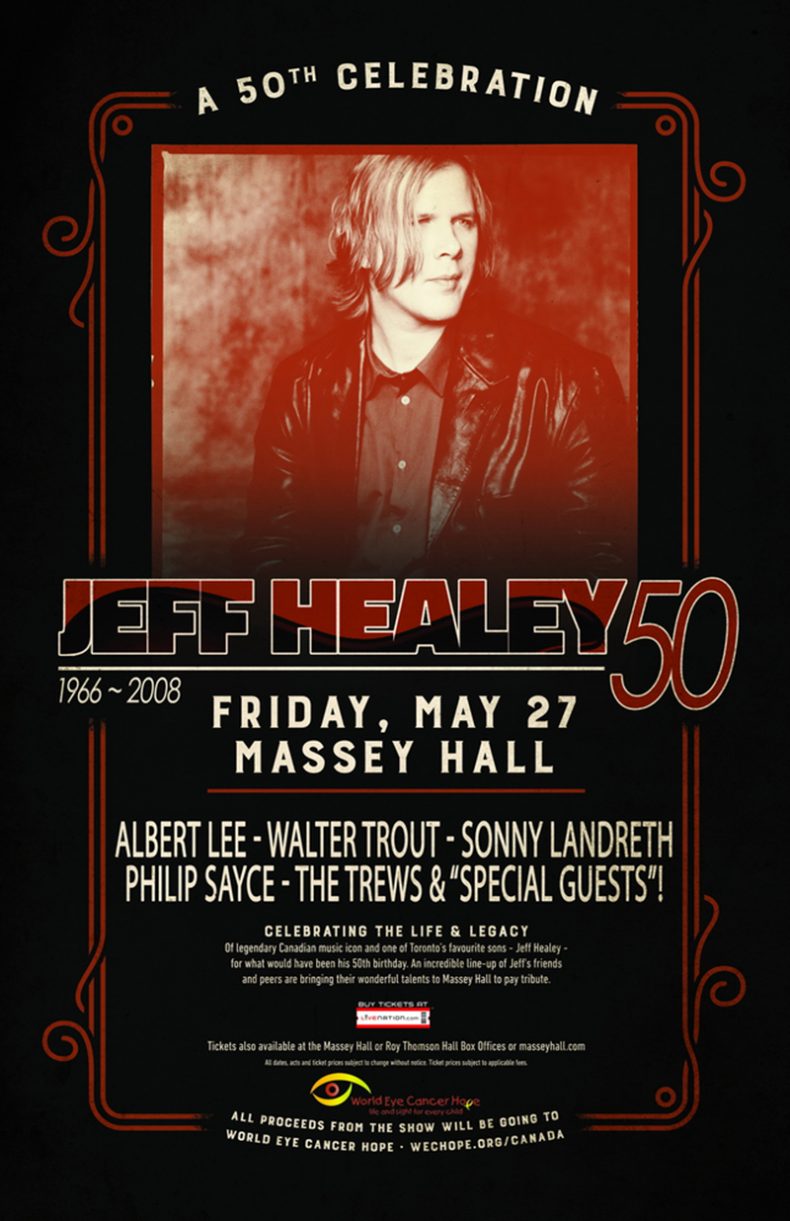 There is something timeless and eternal about the Blues. A song written as far back as the 1930s can still feel just as fresh and timely today as it did 85 years ago. Almost every type of music listened to today can trace its lineage back to that classic Robert Johnson four-bar shuffle. So it comes as no surprise that when it is time to celebrate the life of arguably Canada’s greatest Bluesman, some of this nation’s greatest rockers came to show their respect.

To celebrate what would have been the 50th birthday of the late, great Jeff Healey, Massey Hall was host to an all-star lineup of collaborators, admirers, and close friends, some of which just happened to be the most influential musicians in Canadian music history.

Most of the evening was backed by what was named The Jeff Healey Alumni Band, a collection of musicians who had played for Healey on various projects throughout the years. As is custom with these celebrations, set times were kept fairly short to accommodate the large number of performers. For the most part the set times didn’t hamper the performances. Legends like Albert Lee and Walter Trout barely stepped up to the microphone, instead letting their guitars say everything they needed to. Younger performers Philip Sayce and Shakura S’Aida showed the older audience that Healey’s legacy is alive and well in the next generation. Canadian Rock radio mainstays The Trews delivered a unique set in which they performed mostly covers of the songs they would play as the house band at Healey’s; the bar Jeff Healey once owned and where he gave the then-unknown Trews their first regular paying gigs.

The most emotional performance by far would have to be the evening’s surprise special guest, the one and only Randy Bachman. The Bachman-Turner Overdrive frontman paid tribute to his friend by reworking his biggest hit “Taking Care of Business,” and turning it into a soulful blues jam. Bachman nearly brought the crowd to tears as he placed Healey’s guitar next to him on stage and revealed the existence of a collaborative live album the two had recorded at Massey Hall. Bachman had thought the tapes from the show were lost, but once they were rediscovered Bachman was able to have one of Healey’s guitar solos inserted into a live performance of Bachman’s song “Confessin’ to the Devil.” Even if Healey couldn’t physically be at Massey Hall, Bachman ensured his spirit most definitely was.

Jeff Healey: A 50th Celebration was an inspired tribute to a music legend that passed far too soon. Each performer was able to pay their respect in unique and exciting ways. If last night was any indication, while Jeff Healey may be gone, his music and his influence will continue for many years.

Photographer by choice, writer by necessity. Since moving to Toronto in 2011 Morgan has become an active member of Toronto’s music scene. On any given night he can be found at various venues with his camera in hand. There’s nothing he loves more than exploring all the venues this wonderful city has to offer, discovering new bands and genres along the way.
RELATED ARTICLES
jeff healeylive reviewmassey hall