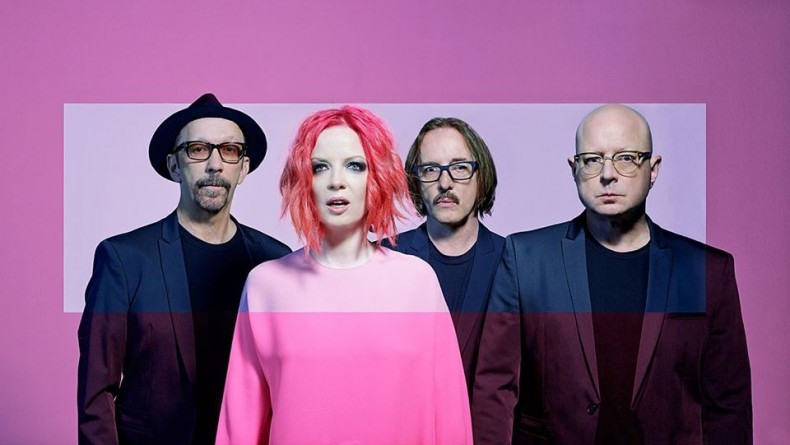 They say one man’s garbage is another man’s treasure. If this is true, The Phoenix Concert Theatre made Toronto one of the richest places in the world Monday night, as Garbage was in the house. Concertgoers clearly believed it as well – the room was filled to absolute capacity. It was standing room only, with movement through the venue led by a push from behind.

The band made its stop here on their “20 Years Queer Tour,” which marks the 20th anniversary of the release of their 1995 debut album Garbage. It also follows the October 2 release of Garbage (20th Anniversary Edition), a re-release of the album which includes additional b-sides recorded between 1995 and 1996. Garbage is accompanied on the North American leg of the tour by TORRES, and the European leg will be supported by British indie pop band Dutch Uncles.

Garbage’s entry onto the stage was spectacular to say the least. The theatre was bathed in complete darkness and silence. A sheer, white, ceiling-to-floor curtain obscured the stage and was transformed into a massive screen, onto which was projected film clips from Garbage’s first tour ever, accompanied by a variety of news clips that serve as a screen cap of the times. The dawn of the age of technology, Princess Diana, even the O.J. Simpson trial take you back in time, while a pre-recorded instrumental track played in the background. The clip ended with a huge Garbage promo shot featuring the four band members standing in full colour, side by side, floor to ceiling, in front of a background of “Garbage pink.” The room once again went dark and silent. A pre-recorded soundtrack of “Subhuman” picked up again, but now the screen was backlit, with the silhouettes of the band onstage appearing larger than life on the screen. The track continued for about a minute, ending with a live drum beat, then the song cut to the real thing – live sound, yet the entire song continued behind the curtain. When it ended, there was a brief silence, then Butch Vig’s pounding drums lurched the band into “Supervixen,” and the massive curtain instantly dropped to the floor and was dragged away. There they are! The flickering back lighting continued, but the band was real, the band was there, the band was now – and the roller-coaster ride began!

Garbage is Shirley Manson (vocals, keys, guitar), Steve Marker (guitar, keys), Duke Erikson (bass, guitar, keys), as well as legendary producer Butch Vig on drums. They are joined on tour by Daniel Shulman on bass. Manson is a seductress onstage – an ageless, beautiful enchantress whose every move, every word has the crowd at her feet. Yet between songs, she banters openly and honestly with the audience, ad libbing sincerely; a gentle, sweet, charming pixie, her natural red locks died Garbage pink. Her vocals are deep and hypnotic; the opening vocals to “Queer” give the lulling impression of a swinging cat’s tail, vocals to “Stupid Girl” are condescending, vocals to “I Would Die For You” are pleading and agonizing. The band’s sound is solid – and powerful. Shulman’s and Vig’s bass and drum beats are pounding and swift. The guitar licks are sharp and jagged at the same time. The band is a well-oiled machine, taking you on a wild musical ride. Garbage piledrove through the musical setlist with industrial precision, much to the delight of the dancing, sweating, howling audience, for a complete hour-and-a-half set.

The band returned to the stage for their encore, and Manson introduced their first piece as a b-side – a cover of a Vic Chesnutt song, “Kick My Ass.” She was clearly emotional as she described the inspiration she derived from the late songwriter, who took his own life at the age of 45 in 2009 after a tragic car accident left him a paraplegic at the age of 18. They finished off the show by pulling another three songs out of their musical treasure chest for the grateful audience. Introducing the third song of their encore, Manson proclaimed it was a song they had never performed live before. “If we fuck it up, you’ll just have to say, “Oh, they did their very best!” – and do their very best is exactly what they did the entire night, from start to finish.

“You must never listen to other people when you feel it in your heart.” Manson told the Toronto audience. “I think that might be one of the best things I ever said,” she added. Garbage has had its challenges throughout the years and they are back – yes, back. There is a new album in the works that will be out next year. Garbage clearly has felt it in their heart, and have NOT listened to others. We are oh so grateful for that. Thank you Garbage for an amazing night!

Trish Melanson lives in the Toronto area with her three boys, Nicholas, Justin, and Eric, her dog Jakkson, and her cats Max and Jagger. She is the former host and producer of Canadian Kickass, a weekly two hour radio show on New Jersey's Chestnut Radio, showcasing Canadian Music. She is also a former Web Content Manager of Indie Soundscapes, an online showcase for Independent Music Artists Worldwide, and was a regular music contributor to The Stroumboulopouli. She is a fervent supporter of the Toronto live music scene. In a past life she was a teacher and Vice Principal in Durham Region. She has many more new and exciting projects waiting in the wings. ;)
RELATED ARTICLES
garbagelive reviewsthe phoenix

by SPILL NEWS on August 18, 2021
GARBAGE ANNOUNCE DETAILS OF 20th ANNIVERSARY REISSUE RELEASE OF THE BAND’S THIRD STUDIO ALBUM BEAUTIFULGARBAGE TO BE RELEASED OCTOBER 1 UMe Garbage have today announced details of their upcoming 20thanniversary reissue of the band’s third studio [...]