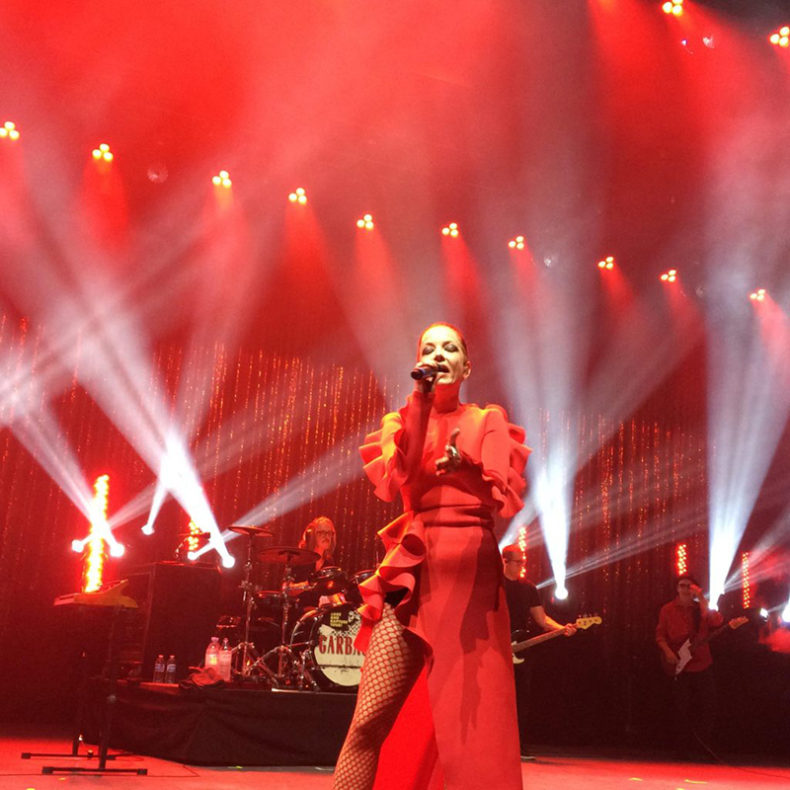 Ever since Garbage arrived on the scene in 1995 with their massive hit “Stupid Girl,” I’ve long wanted to see them live, and as fortune would have it I was able to do so Wednesday night at the Sony Centre in Toronto.

Opening their set with the current single “No Horses” from their sixth studio LP Strange Little Birds, Shirley Manson appeared as a vision in blood red with her matching slit gown and fiery red hair in a bun. Prowling and stalking the stage like a cat, she performed songs “Sex Is Not The Enemy” and “Number 1 Crush” and then, along with bandmates Butch Vig (drums), Steve Marker (lead guitar) and Duke Erikson (bass and rhythm guitar), had most of the sold out crowd on their feet and well into it. In between songs Manson carried on a friendly banter with the crowd, introducing the songs and at one point saying “It’s always nice to come to Canada, but especially now,” no doubt reflecting her feelings after being on tour with Blondie in the U.S. for the last couple of months on the Rage and Rapture Tour.

After Manson strutted around the Sony Centre from front to back during one of the later songs, the band finished off the set in grand style with their Bond movie theme for The World Is Not Enough and their two monster hits “Stupid Girl” and “It Only Happens When It Rains.” After leaving the stage to a raucous and cheering crowd, it was clear Garbage departed Toronto as conquering heroes.

Gerry Young is President of Current Records and Management, and author of the 2011 biography Pop Goes The Weasel: Rock And Roll Off The Record, available at Indigo/Chapters, Barnes & Noble, and Amazon.com. He has recorded and managed Juno Award winning bands Martha And The Muffins and The Parachute Club among others.
RELATED ARTICLES
garbagelive reviewtoronto

by SPILL NEWS on August 18, 2021
GARBAGE ANNOUNCE DETAILS OF 20th ANNIVERSARY REISSUE RELEASE OF THE BAND’S [...]