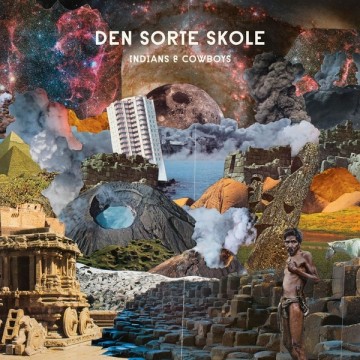 No soundscape boundaries. Trying to pigeonhole these Copenhagen-based DJs in a genre is like trying to earn the respect of an online troll. Pointless. With this latest release, our turntable musicians reprise their musical identities and take us on a surreal, 78-minute magical mystery tour, steeped in old vinyl samples. From a press release:  The lead single “Heli Yosa” is made from an immense amount of samples…from 13 different countries and six continents between 1956-1996. The samples include traditional horns from Iran, distorted flutes from Syria and Turkey, synths from ex-Yugoslavia, sufi-chanting from Senegal, fuzzed-out guitar from New Zealand, percussion from France, throat-singing from Italy, and bad-ass drums from India all blended together into a seamless whole by DSS. It’s the perfect example of the duo’s musical universe that draws on cultural inputs from every corner of the world leaving no border untouched… Because of their heavy sample usage, DSS are a unique case who cannot sell their music via iTunes or any other major music platform.” This kind of group is a singularly, artistically rare case as we see their creative sampling juices ooze all over their tracks while bringing back ghost bands from the forgotten past. In fact, they needed to create a 30-page booklet that tells listeners the origin of each sample. Den Sorte Skole track down each sample, download it as an mp3, then purchase the original albums to honour and pay respect to the artists. Positive role models for sure! If one can make a comparison, this album is like the highest form of a foreign film that blows away the handholding, spoon-feeding, cookie cutter North American films. Indians and Cowboys feels like a private, intimate serenade, which creates an evocative mood with some eclectic choice of samples, or perhaps, a hushed intimacy? Listening to this album from beginning to end, you are hard pressed to figure out where each track begins and ends. There is also a sense of self-reflection as astute listeners will hear some samples from Den Sorte Skole’s  previous Lektion series peppered throughout. A description of these tracks will not do them justice; you will need to hear the prodigiousness of the musical stream of consciousness yourself.

There is some kind of non-western wonderful to this “stitched together” album (other accounts have this at 350 records, 75 countries, and around 10,000 samples) as it strikes an unassailable high and should merit a high score based on effort alone. It’s like a modern-day The Beatles (White Album); with the multiple sonic landscapes and layered tendencies, it’s an aural kaleidoscope. It’s not an easy listen with its multitude of textures, accents, and sound manipulations that can barely be deciphered even after numerous listens. This sample collage album is a glimpse into the cultural microcosm of a global heritage. For some, this album might be too ambitious with so much going on, but if you want something dense that challenges your listening ability and stretches it to the outer limits, then Den Sorte Skole have shown us with Indians and Cowboys how to think outside the box and beyond. This album could be their 78-minute yardstick when measuring their greatness in music history. Den Sorte Skole have created their current magnum opus.

Insert pretentious stuff about me here. I was born at a very young age. I am pretty, funny... without the comma. Easily distracte
RELATED ARTICLES
album reviewsden sorte skole
9.0