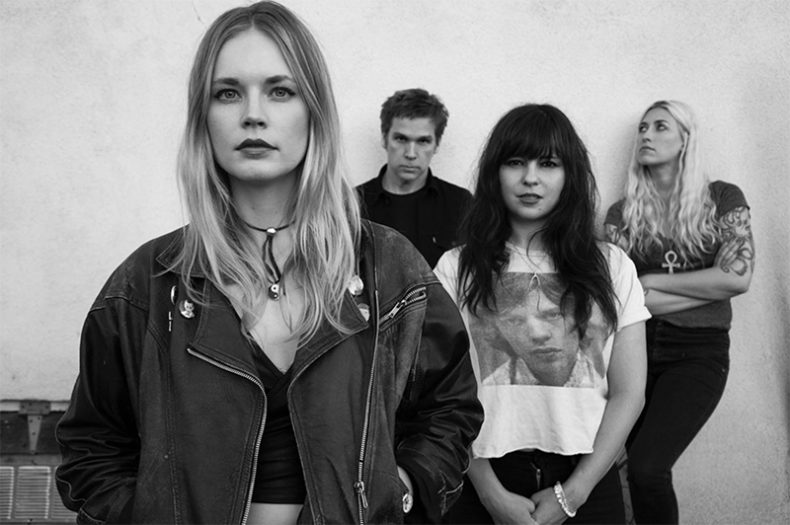 Twas the night before Halloween and all through the house, people came dressed in costumes to see Gymshorts and Death Valley Girls play at the Kung Fu Necktie. I know it doesn’t rhyme, but that’s what happened. The air was electric with the energy of the upcoming Samhain holiday and you could feel this night was going to magical!

I’m a newbie when it comes to Gymshorts. I admit, I was lame and didn’t check them out before the show. While local band Britt Thomas and the Breaker Boys were on stage, I got a chance to chat with Sarah Greenwell who is the founding member. Their new album, “Knock Knock”, was released in August and their tour in support for it has just kicked off. The pure fun of their songs cannot be understated. They are in it for all the right reasons. It’s a blend of punk and hard rock with some Ween sensibilities. They stormed through their eleven-song set, featuring heavy on the new album. They were tight and focused but laughed and crashed into the audience. Doing what should be done at a venue like KFN; engaging the audience. Songs like “Copy Cat” and “Oh Brother” were chanted by the crowd and Sarah trekked into the crowd more than once. The pairing of these bands is perfect! 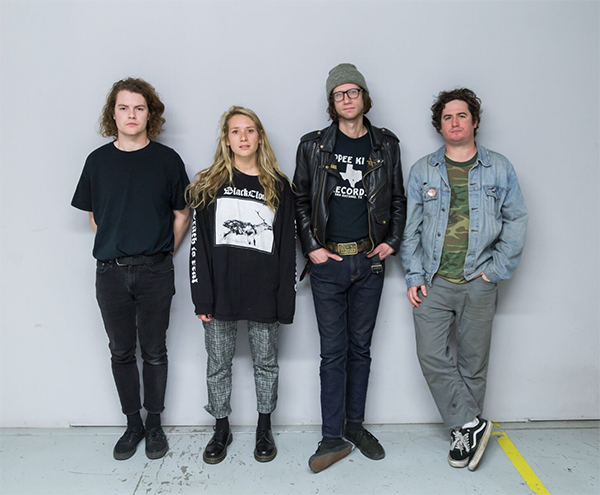 Death Valley Girls took to the stage quickly asking for the bright white light to be killed, bathing them in a nice bloody red glow fit for a Devil’s Night performance. You see, Halloween is like Christmas to the Death Valley Girls. The excitement of it in them was palpable. Much banter was made of it (and Satan, who incidentally worships them) and since their new album, “Darkness Rains” has a theme of death running through it, it all made for the atmosphere of an amazing evening.

Holding down the fort on this tour for multi-instrumentalist Bonnie Bloomgarden and guitarist Larry Schemel are Pickle on bass and The Kid on drums. They are no stranger to DVG and rotate in and out regularly. The set kicked off with the first track of side two from Darkness Rains, “Abre Camino”. They are polished and tight with Larry giving some extra pyrotechnics in his delivery. “More Dead” was a definite crowd pleaser as was a killer version of “Sanitarium Blues” from their 2014 debut album, “Street Venom”. “Disco” was a fun number that had everyone shaking their booties, followed by Rains lead single “Disaster (Is What We’re After)”. They closed out with the 2015 single, “Electric High” inviting people up on stage to dance with them and making the Necktie clamour for more. Sadly, that was all.

A highly charged evening that went by too fast, if you have the chance to see this combo, please do! You will leave on a high from the energy in the room. They are infectious and fun. Try to say hi to them as well. They don’t bite and are the nicest people you will ever happen upon.

Michael Mitchell's love of music started at an early age and slowly became an addiction that courses through his veins to this very day. It is guaranteed that if you are in his proximity, he will try to get you to travel to the nearest record store and make you buy beyond your means. His wife and two children acknowledge his problem and continue to encourage him into rehab. He currently writes for Torched, Stereo Embers, God is in the TV, ReGen and Spill magazines.
RELATED ARTICLES
death valley girlslive review

by David Lacroix on February 22, 2018
BURGER-A-GO-GO SET FOR ROCK AND ROLL SIZZLE The Californian garage rock gurus at Burger Records have cooked up a stacked lineup of female-fronted bands. Featuring a special two-night [...]