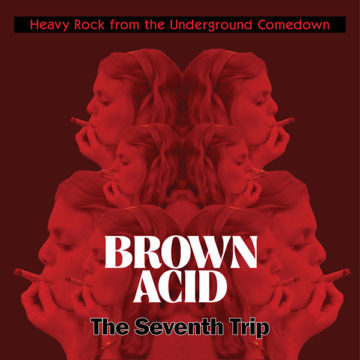 This album is a recompilation of tracks from the ‘60s and ‘70s that were never able to make it into the mainstream radio of those days. Daniel Hall and Lance Barresi once again compelled some the time-trapped jewels and put them together in their already famous Brown Acid series.

The Seventh Trip is a going-back-in-time album. The songs included here are a great selection of hard rock and psych rock that showcase sounds similar to Black Sabbath, Jimmy Hendrix, Deep Purple and Led Zeppelin. It is dirty and hightlight great technique and quality, simple and attractive riffs, aggressive drums that work as an engine to a car and the wah-wah solos that put the emotions into the music.

Songs like “The Sorcerer”, that sounds like a track that Black Sabbath never recorded, resembles “War Pigs”, especially in the basslines. “Good Times” by Nobody’s Children is probably the most psychedelic song off the entire album; the lyrics and the guitar are just very dirty, not to mention the terrifying laugh in the background of the song.

“The Calm Before the Storm” is probably the best track here, it starts with a simple intro and moves into a killer riff, palm muted, that just rips the entire album while in the middle of the song the bass and the drums make something absolutely awesome that later will give space to probably one of the most awesome solos on the album.

Despite the fact that the songs are very well constructed and energetic, the poor production at times makes the compilation a bit untidy. The vocals and the drums in some tracks are difficult to hear making the songs a bit incomprehensible.

This Seventh Trip is an excellent album for those who wish to get deeper into the Woodstock era. From the first riff you won’t be able to stop listening to this trip.

Sebastian Mahecha is a postgraduate journalism student at Humber College. I’m passionate about music, I enjoy listening to mostly any kind of music, from thrash metal to most underground salsa. Politics and social justice have been of my interest for many years, so whenever a new musician records a song about controversial topics I’ll be there to take a look.
RELATED ARTICLES
album reviewalbum reviewsbrown acid
7.0