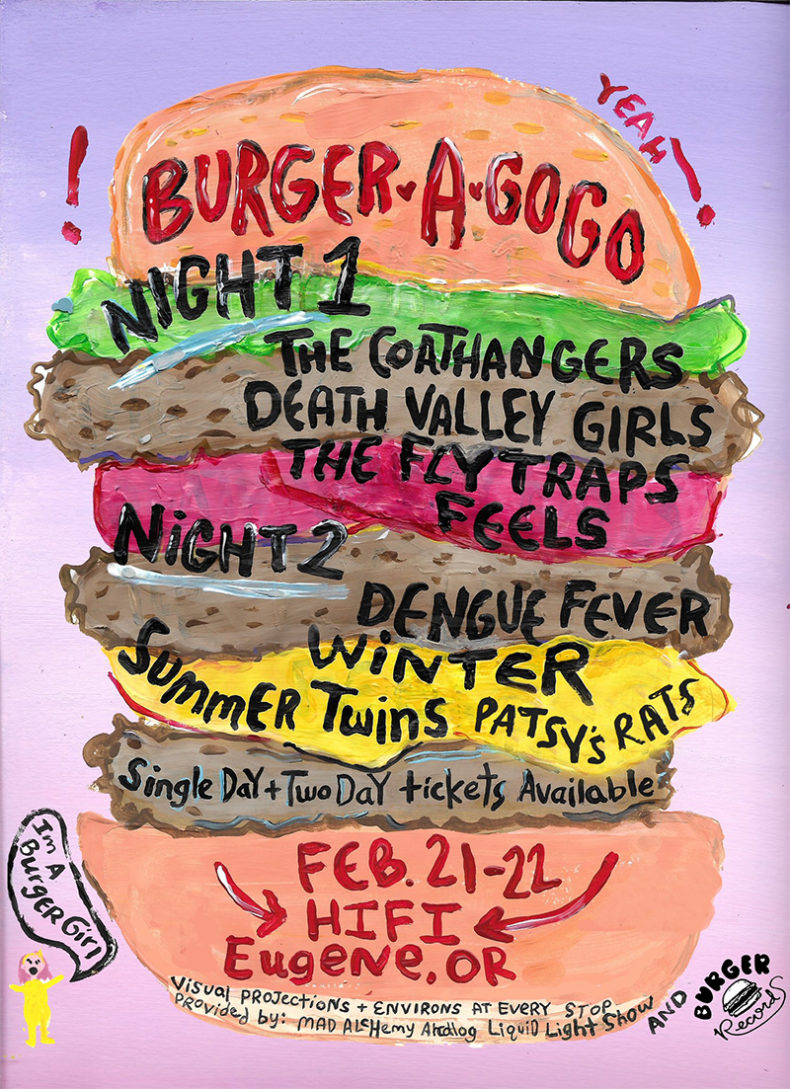 The Californian garage rock gurus at Burger Records have cooked up a stacked lineup of female-fronted bands. Featuring a special two-night traveling show, Burger-A-Go-Go will be slinging four acts per evening accompanied by an awe-inspiring light-show. This showcase of west coast rock bands are set to bring southern California party to a city near you. With a lineup that includes the wacky, occult-flavoured rock of Death Valley Girls,  the southern-tinged garage rockers the Coathangers, Burger-A-Go-Go will be a tasty rock-and-roll affair.

The Death Valley Girls know from experience that performing with the stunning light magic of the Mad Alchemy Liquid Light Show is a game changer; singer Bonnie Bloomgarden; “It puts everyone in the same dream much easier and faster than if there were visuals. It looks fucking cool! I’ll turn around to look at the drummer and just be tripping out on lights!”

The lo-fi chaos of the Flytraps ,and the Feels will round-out night one while night-two includes support from the dream pop of Winter, the gorgeous melodies of Summer Twins and the power-pop rock and roll of Patsy’s Rats. The fact that so many of these musicians are tight friends will make this tour even more fun than usual.

Inspired by their recent tours supporting the legendary psychedelic pioneer Roky Erickson on national tours, Death Valley Girls have collaborated with the pinnacle of psychedelic rock and roll; “It’s like we never have to do anything again!” jokes Bloomgarden, still in disbelief that band guitarist Larry toured with the 13th Floor Elevators frontman. Bonnie is also excited to tour nationally with the Flytraps and the Feels, “we are such good friends and you never get to tour with your friends!”

Dengue Fever are set to deliver their smooth blend of jazz, psych and pop as the second evening headliner. Lead by the enchanting voice of Cambodian singer Chhom Nimol, the band’s style of Khmer rock feels both exotic and effortless; “Music is beyond language,”  says Dengue Fever guitarist Zach Holtzman, “It transcends the limits of understanding each other linguistically. It just flows naturally.”

Burger-A-Go-Go might be an all-female vocal lineup, but the show will be a smorgasbord of awesome for anyone who likes the taste of rock and roll. Burger-A-Go-Go is setting out to saturate your senses and take you away to a rock and roll dream-land. Get your buns out there and get toasted.