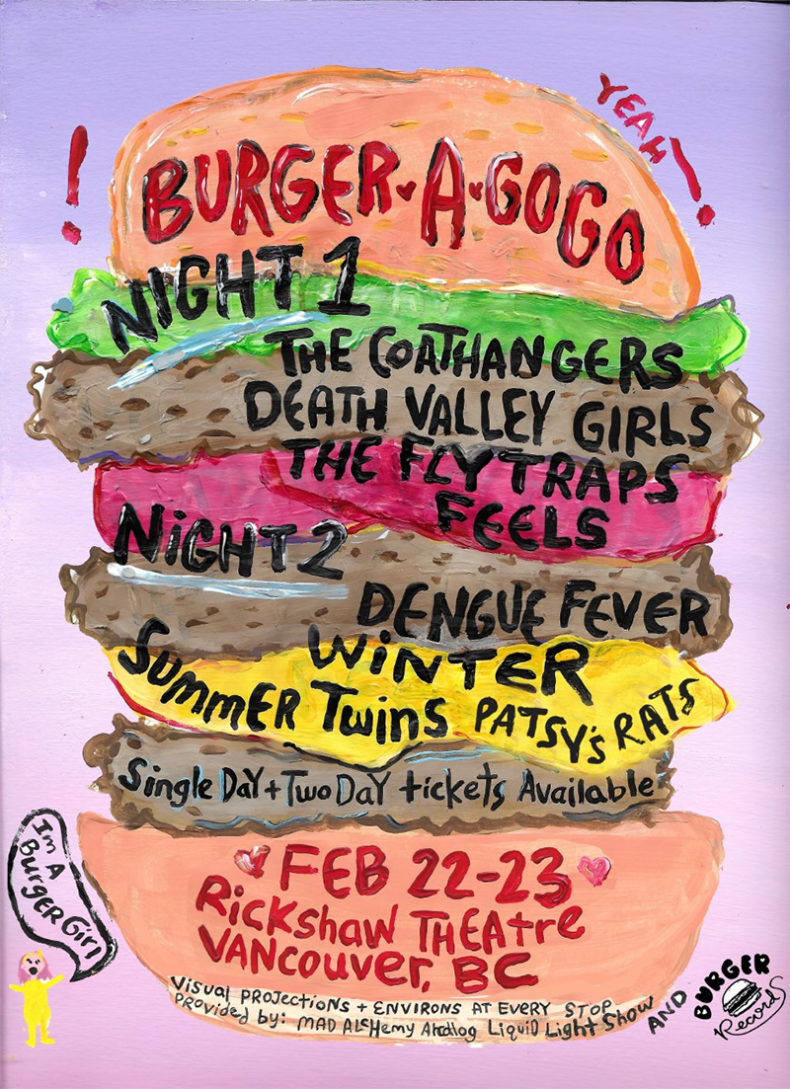 Vancouver’s Rickshaw Theatre set the scene for an action-packed two-night event courtesy of the Burger Records Burger-A-Go-Go tour. With a line-up featuring 8 female fronted groups, massive mind-bending visualizations and on-site record store and label with an exclusive tour album, the words  “concert” or “show” aren’t quite strong enough to describe Burger-A-Go-Go; this event is a festival on wheels.

Many of the bands are not only friends, some are roommates, the energy amounted to an unusual night of outright fun. Each evening’s lineup felt distinct but shared obvious talents; Burger Records is one of the hardest working independent music labels and they have no shortage of talented friends. Performing under the shifting amoebas and almost indescribable projection art of the Mad Alchemy Liquid Light Show seems to bring out especially dreamy, energetic and meditative performances. The especially captivating projections inspired particularly fiery performances from all performing artists.

Night one struck off with the grooved out and casual psych rock vibes of Feels. It only took one set for the magic of the liquid light show and no-shortage of garage-rock attitude Feels to get the audience’s blood pumping. Following up, the Flytraps exemplified a harder hitting, rock and roll sound and aesthetic, further showing the power and diversity of the all-female lineup.

Death Valley Girls delighted the audience with a raucous set of heart-pounding drums, ebbing bass and dark fortified guitar-work. Singer and lead-woman instantly embraced the audience with her quirky perspective and alluring presence. Death Valley Girls played a few favourites from Glow In The Dark styled as if the B-52s had a kick ass party in a grave yard. With Bloomgarden cultivates a dark, empowering, playful head space that is simply a blast to behold, jesting “guys get to have all of the fun in the world, well I’m a man too!” on the introduction of “I’m A Man, Too” The spirit of justice and equality has always been present in punk rock, and Death Valley Girls are as punk rock as it gets.  Basking in the intensity of the psychedelic lights, Death Valley Girls performed new songs featuring bigger, darker bass overflowing with a tasteful mix of heavy rock, garage and psych suggesting that the band’s best work to date is looming on the horizon.

The Coat-hangers dished out style more than befitting of southern three-piece rock bands. With catchy as hell cuts like “Springfield Cannonball” and “Down Down”, the Coat-hangers demonstrated a strong back catalogue and appeared to be having a great time under the constantly shifting lights.

Evening two started off with the quirky rock of Patsy’s Rats, a peculiar and charming duo with a strength for songwriting and a healthy-boatload of singles. The following set from Summer Twins was slightly ironic, considering the band has five members and performed their set during a snowstorm. The sweet-melodies from this sister-led group with their brilliantly catchy vocal hooks such as on “Another Hit” was simply irresistible. Though considerably softer than any of the other bands on the bill, Summer Twins’ succulent vocal melodies are too charming and infectious to ignore. Winter, a Los Angeles rock band with deep, glittering shoe-gaze textures split through a captivating, dream-like set. On the song “Jaded” band leader and vocalist Samira Winter burst through with its sardonic reflections on the music industry with critical effect. With lines like .”You’re so jaded; I don’t wanna be jaded” Winter warmed more than a few hearts in attendance.

Dengue Fever play an incomparable blend of California pop, psych, jazz and lounge topped off with the sweet mesmerizing vocal presence of Chhom Nimol, a stunning Cambodian female vocalist. Featuring keyboards and a saxophone, Dengue Fever are a well-stocked rock group with a multi-cultural music attack comparable to no other. Guitarist Zach Holzemen shares vocals and songwriting duties with Nimol. Shredding through their blend of South-Asia meets LA psych rock, Dengue Fever delivered many favourites such as the cleverly bitter “Sober Driver” and shiver inducing vocals on “Tiger Phone Card.”  The vivid, swirling collages behind the stage keep the audience in a constant state of happy awe throughout the set. For an encore, Dengue Fever spontaneously invited the night’s opening bands onstage; Patesy’s Rats, Summer Twins and Winter enthusiastically obliged by climbing onstage, culminating in a 20-something person go-go dance as the world class art of Mad Alchemy swirled and spiralled behind them.

The Burger-A-Go-Go tour is a spectacular exposition of musical, visual art and culture comparable to last year’s Desert Daze Caravan tour. Burger Records served up an more than appetizing day affair of punk, garage and psychedelic excellence that left the audience salivating.