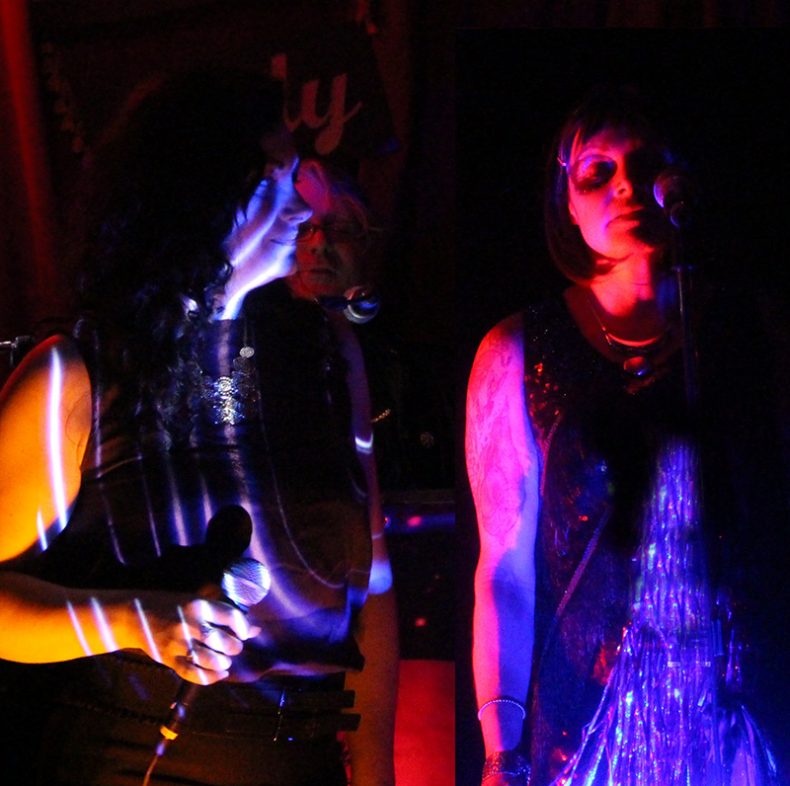 It is a hot, muggy night in Toronto, again. But inside the Painted Lady, it is a different kind of heat: the outside conditions are no match for those inside the venue, where Church Of Trees performed to a very enthusiastic audience, wrapping up a very short, two-show tour of Toronto.

Bernard Frazer, the mastermind behind Church Of Trees who writes and arranges some of the finest synth pop/electronic music being produced today, stood behind his computer/keyboard console and produced some fine synth pop sounds. Joining him on stage were two fantastic vocalists,  Allison Stanton and Tara Hope. They traded off vocals and provided some fine introductions.  Although they are new to the band, the trio sounded like they had been together for years.

Kicking off with a new song, “Eye On You”, Church Of Trees held the audience’s attention for the night. There was no need for a fancy light show, or overdoing it with projections, the focus was on the band and their music, and they delivered. The band relied heavily on their latest album The Dark & The Light, as well as their debut EP Primitive Creatures, but they also performed a couple of new ones, and even a very clever cover a sinister version of Britney Spears’ “Baby One More Time“. Of course, they left their first hit “Like Gary Numan” until the end of their set, and they rocked the hell out of it.

The songs from their albums really come alive on stage. The releases are brilliant, but here the songs take on a different type of energy, and sound brand new and suited to the new vocalist for the band. Frazer had control of the music and the only thing that surprised me was the lack of dancing on the part of the audience. But then, Church Of Trees produce music that one can either listen to or dance to. They provided a variety of styles of synth music, including the new  “My Love My Love”, which should be a massive hit if they release it as a single.

Cheryl Beatty did a fine job opening the show.  Although her music is at the opposite end of the musical spectrum, it all fit together. Armed with an acoustic guitar and a wonderful voice, she presented her own brand of folk/blues. She performed some songs from her debut album, The Middle Journey, but also played some new ones (which were brilliant) and a couple of covers, including the Sesame Street favourite “I Don’t Want To Live On The Moon”.

It was a great night full of great, original, creative music. Church Of Trees proved to be the band that one should not miss, if you have a chance to catch them live. This will be one of those shows that will be talked about for a very long time. I said it before, and I will say it again, I am prepared to pray at the altar of Church Of Trees.

Born and raised in Whitby, Aaron discovered music through his love of The Beatles. This led to a career in radio, writing for various publications, and ultimately a radio show about The Beatles (Beatles Universe), which ran for over four years. When not immersed in music, Aaron enjoys spending time with the loves of his life -- his wife Andrea, and daughters Emily and Linda (all of whom have an intense love of music too).
RELATED ARTICLES
bernard frazerchurch of treesdeedee butters
9.0