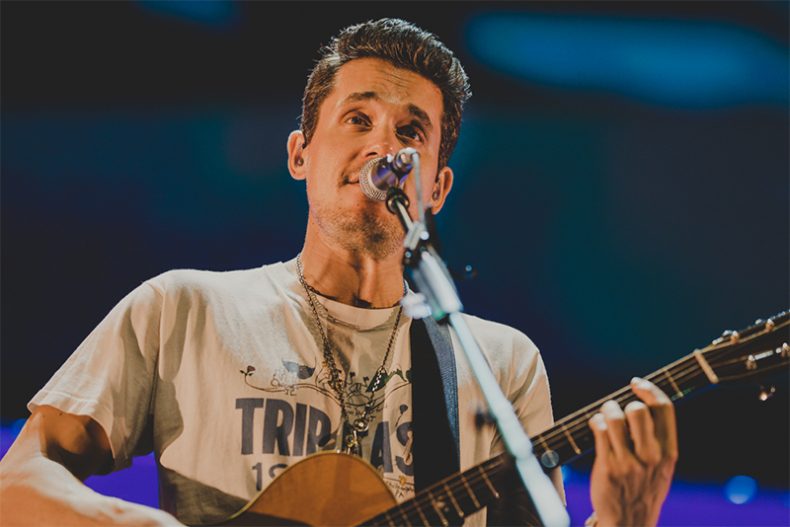 Scotiabank Arena was filled with the sounds of epic guitar solos and passionate singalongs as John Mayer kicked off the first of two nearly sold-out shows in Toronto. The evening was split into two sets and so, with no opening act necessary, Mayer and band took to the stage at 7:50pm to get the show going with “Belief” from 2006’s Continuum. The excitable crowd of mostly 30 and 40-somethings happily took in a steady stream of mid-tempo tunes that made up the first set. The stage had a simple but beautiful layout comprising of a large video screen and smaller backdrop featuring bright silhouetted nature scenes throughout the evening which perfectly suited the laidback vibe coming from the band. With the slightest bit of awkwardness Mayer casually chatted with the audience between songs, often providing anecdotes about the inspiration for various tunes. He amusingly pondered the terms B-sides, deep cuts, and album tracks before announcing that the next song was definitely an A-side. Much to the delight of the audience, he then launched into one of his first big career hits from back in 2001, “No Such Thing” which closed out the first set.

After a short break, set 2 began with four acoustic songs including the mega hit “Daughters” and his now infamous cover of Tom Petty’s “Free Fallin'” in which Mayer could barely be heard over the audience singing along. What is quite fascinating, however, is that less than half of the night’s setlist was comprised of what would be considered big radio hits. Even more impressive is the fact that the audience seemed to remain captivated while Mayer spotlighted various deep cuts and generously lingering guitar solos. The general flow throughout set 2 did seem a bit off at times with what seemed like long transitions between songs but nevertheless the energy remained high and the musicianship unwavering. There was much excitement when Mayer acknowledged a young man’s sign in the audience, leading to the signing of the fan’s guitar.

After closing set 2 with a particularly soulful rendition of fan favourite “Gravity”, Mayer thanked the audience and appreciatively noted that he’d been coming to Toronto for nearly 20 years. He returned to the stage for a two-song encore, ending the night with one of his 2018 single “New Light” while the song’s lighthearted music video played on screen behind.

John Mayer does not put on a “greatest hits” show. While this may disappoint a small few who came hoping to hear all of their favourite singles from the 2000s, it is clear that Mayer caters his live performances to his most dedicated fans who have been coming to see his shows for many years as well as focusing on tunes that he genuinely enjoys playing, and the overall performance is the better for it. No doubt show number two in Toronto will be another crowd pleaser.