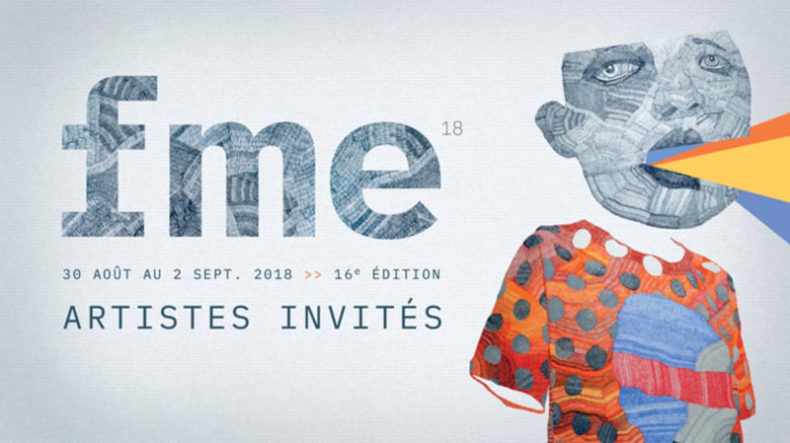 I was hesitant about the entire plan, leaving on a small plane with a handful of people I didn’t know and one I did to land in a small city in Northern Québec to cover a music festival I wasn’t familiar with. I was hesitant but excited for the adventure, and so there I was, thousands of feet in the air to go explore a part of my own country I never imagined I would explore.

FME is a music festival for emerging artists in Rouyn-Noranda that takes place Labour Day weekend. This was its 16th year running and if what I experienced is anything like how every year has been and every coming year will be, then I think it is safe to say this festival is not going the way of TURF and is here to stay. Part of what makes this festival unlike all the others is the charm of the city itself. Home to about 42 000, this modest mining community opens its arms to FME with such warmth and heart. Walking around the downtown area, almost every window has a display for FME, most people wear a smile on their face and it is obvious this boost to the economy does a world of good for everyone in the town.

The makers of FME were brilliant to put on this festival in a secluded area. A place where the people are not jaded, the extra busy streets from the festival are considered something wonderful and there isn’t much competition, unlike in Toronto where it is unlikely to find a weekend in the summer where one festival is up against ten other events. In northern Québec, that just isn’t an issue.

With that the air was fresh and everyone was excited. I wasn’t too familiar with about 70% of the bands before I went, even though I did some research and used the festival’s intuitive and easy to use app to listen to every band, I was still pleasantly surprised by what I saw. I was even more surprised by the end of the four days how much I grew to love francophone music. So much so that I have been playing a few of the bands on repeat since coming home.

The first act to take my breath away was Hubert Lenoir, a glam pop singer whose album Darlène is shortlisted for the Polaris Music Prize this year. Lenoir performed at L’Agora des Arts, a former church turned music venue. From the balcony where I sat I saw the crowd hang on his every move while I sat back and felt as if I had been transported to another time, watching Marc Bolan sway across the stage with T. Rex. I’ve never wanted an artist to win the Polaris Music Prize as much as I want him to.

Later that same night I ventured over to a small outdoor stage. At this point my gloves and cardigan were no match for the cold night air that came in. Summer might have been on its last legs, but in northern Canada it felt like Christmas was around the corner. While continuing to drink in order to keep warm, I watched the Acadian band Les Hôtesses d’Hilaire. Lead by Serge Brideau, a giant presence both in personality and size, wore a dress as he is known to do, and can be perfectly described as Moses meets Divine. He addresses the crowd the way an evangelical leader addresses their followers before bursting into songs that are a mixture of glam pop, spoken word and punk. Cold weather or not, everyone in that crowd was dancing, singing, loving, it almost felt as if they were actually being saved by a higher power. This only being the first night, I knew the weekend was going to be totally spectacular.

I was not wrong. Over the next few days I got to catch an astonishing amount of good music. In the middle of the festival, which takes place mostly in venues, there are two outdoor stages, a small one I just mentioned and a big one. Both these stages are set up on a major street with small stores and apartment buildings crowding either side. Even though there is housing all around the stage — a stage that has loud music until 11pm — no one has once complained. On this loud stage in the middle of a major street, I caught a punk band from France, Johnny Mafia. Not shy when it comes to loud riffs, a good hook and not caring what everyone else thinks, they just want to make the music they like. Also appearing on this stage was Galaxie, a noisy, fuzzy, garage rock band who don’t let their intergalactic costume choice overshadow their musicianship.

A few other standout acts were Pierre Lapointe who brought his John Waters’ influenced stage setup to the Petit Théâtre du Vieux Noranda two nights in a row. Though I cannot tell you the lyrics to his songs, as they were in French, I can tell you the music was the kind that made you want to travel back to 1960, get a surfboard, ride some waves, then go home and cry. I was dancing along to the music while feeling an internal sadness at the same time. Think of it as if Ian Curtis of Joy Division made a surf rock album. The stage, as mentioned, was right out of a John Waters film, complete with a bubble machine. At one point, condoms were thrown into the audience. This was an absolute highlight for me.

Then there was Karkwatson, the triumphant return of the super group composed of Patrick Watson and Karkwa. After taking a break from performing for 10 years they brought their A-game for three nights in a row to L’Agora des Arts. With much audience participation, a beautiful light show, and harmonies that sounded like a fish moving in water, this was a truly special show and would not have been done without FME. To mix things up a bit, I stopped in to see Alexandra Stréliski, a neoclassical pianist who also played L’Agora des Arts (this being the biggest venue it had most the big acts). Maybe this is the big city girl in me, maybe this is the punk rock in me, or maybe this is the cynic in me…. but when I walked into the venue at 5 pm of the last day , I was expecting there to be plenty of room for me to spread out, I was expecting a half full house at best. I was wrong in every way and I’m happy I was. A classically trained pianist you would not expect to be a big draw, but here she was in a room so full I couldn’t find a seat, a crowd so silent that if I closed my eyes I could have been alone and as I looked around I saw a mix of all ages from children to grandparents and everything in between. It was a truly spectacular performance by a woman with a gift and strong talent. After an exhausting weekend it was refreshing to have her hit the keys and have them wash over me as a cleanse, as a bright light lifting me for the last night in this special city, at this special festival.

This is where I have to tell you the last show I saw, my final hurrah after such a mesmerizing 45 mins in a church with a pianist, I ended this night and I ended my FME experience with the California metal band Cattle Decapitation. What can I say about metal that hasn’t been said before, I told a friend I was with that metal is the only genre I would never listen to at home but I love to see live. The energy that guitarists put into twirling their hair like a windmill going hyper speed while not missing a chord is a true accomplishment. I felt during this set that this was the big one for all the metal heads of northern Québec, the one they had been waiting for all weekend and they let it show. The pit was a rough pit, one that I wouldn’t dare go near and while I stayed a safe distance back near the basket of free ear plugs. Two different men, spaced 10 minutes apart walked by me with bloody noses.

Though I can’t say it was this final experience that summed up the weekend for me, I can say it added to it. With countless other acts I don’t have the space to mention from hip-hop to DJ’s to visual artists, FME really strives to make everyone included and everyone welcome. Never before in all my years of festivals have I ever felt an overall warmth and feeling that everyone was contributing to something they felt was important. The group I went with from Toronto all shared these feelings about them and so did every other person I met. I can’t tell you if it’s the fresh air, the fact that it was not set in a big city or the true love of music, but this festival is special and I hope I get to experience it again.

SPILL WRITERS strive to keep our readers up to date with news and events in the music industry. We keep you informed of the most recent information regarding new releases, tour dates, and information items about your favourite artists.
RELATED ARTICLES
festivalhubert lenoirjohnny mafia