SPILL NEW MUSIC: DRÆMINGS SHARE NEW SINGLE “I COULD BE YOUR MAN” | TRACK OUT NOW ON PLAG RECORDS 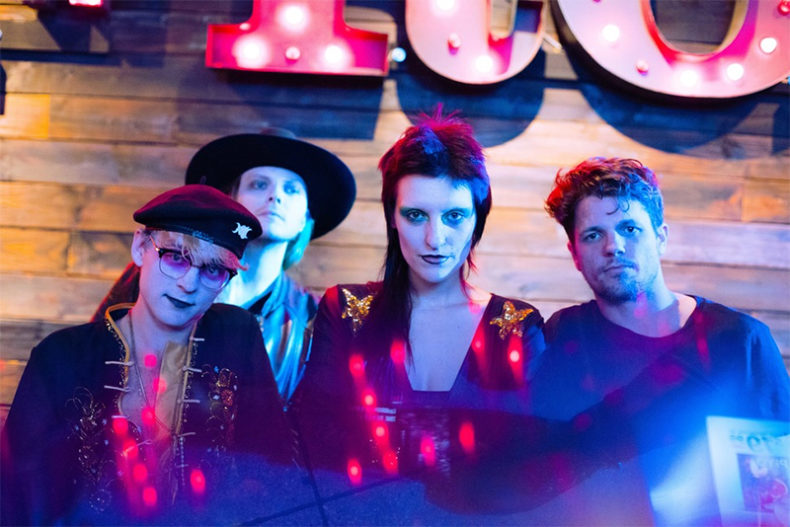 DRÆMINGS SHARE NEW SINGLE “I COULD BE YOUR MAN”

TRACK OUT NOW ON PLAG RECORDS

DRÆMINGS recently shared their new single, “I Could Be Your Man,” on PLAG Records. The song was premiered this week with praise, stating, “Featuring a set of pulsing, moody synths and some atmospheric guitar, vocalist Kimi Recor muses upon the social construction of gender and the freedom that comes from choosing to identify outside of the binary options that were exclusively available for so long.”

This coming Sunday, DRÆMINGS will celebrate the release of “I Could Be Your Man,” performing at Alex’s Bar as part of Happy Sundays music festival in Long Beach. They will share the stage with The Shrine, Death Valley Girls, Holy Wars, and others.

“I Could Be Your Man” is a song about existing outside of labels and the fluidity of people’s identities. Sometimes, having a word to describe yourself can be empowering and validating. Singer Kimi Recor recalls always being forced to describe herself with boxes: as a child she liked to play in the forest rather than with dolls and was called a tomboy. She was assigned female at birth so she is labeled a woman. She has had relationships with both men and women and was called bisexual. Despite all of these descriptors, she never fully related to any of them. “I Could Be Your Man” explores that and how identities can exist on a spectrum, in the grey areas between labels, or change completely from one day to the next. It’s about being unapologetically yourself, no matter who or what that is.

It was recorded at Underwater Studios, the DTLA recording studio owned and operated by DRÆMINGS’ bassist Thorson. The band writes as a unit, with Recor, Thorson, and guitarist Christopher Vick jamming together until the music is completed. Recor then contributes the lyrics and leaves Thorson to mix and master. This is the same process that all writing and production has taken since DRÆMINGS evolved from Recor’s solo project to a cohesive band effort.

Recor’s vision for the future of DRÆMINGS evolved during the two years it took to release her debut full-length solo LP. She yearned for control, collaboration, and ultimately, the ability to perform and put out music on her own terms. Going back to her roots – playing and writing with other artists – and co-starting her own independent label, PLAG Records, Recor channeled her gritty and industrious mind, putting out the band’s “Loveless” single and their S/T EP on her own label, and playing a residency at The Echo in 2017, just after parting ways with her label. Akin to the band’s 2017 S/T EP and 2018 single “Stay Up All Night,” “Siamese Flame,” was written and recorded by the four piece outfit, consisting of Recor (vocals/guitar), Christopher Vick (guitar), Thorson (bass/synth) and Nathaniel Meek (drums), the creative and musical minds she elicited to be the new DRÆMINGS lineup. The run of singles that will roll out through the rest of 2018, and the 2019 EP will also follow suit, solidifying the band as a collective identity once again.