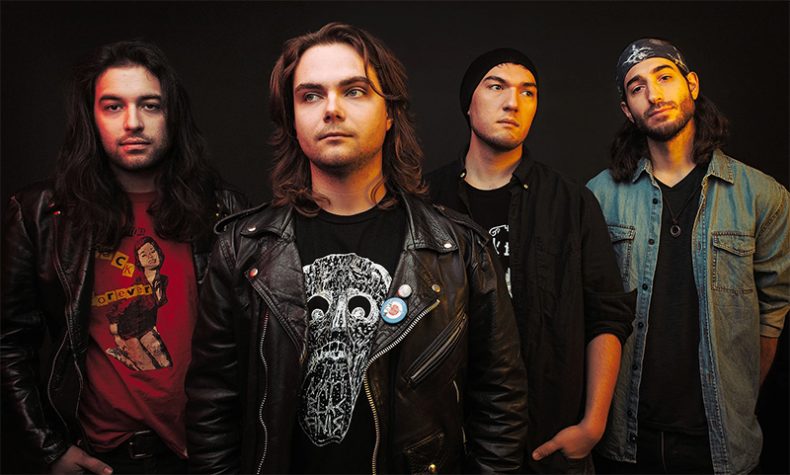 Few rock bands from Ontario get me nearly as excited as Toronto’s very own Drop Top Alibi. This is a band who, since 2017, has been releasing hard-hitting and melodic rock ‘n’roll, reminiscent of the ‘80s in a fashion that remains unique, modern, and distinct to the band’s own style and blend of songwriting. Coming off of a string of recent singles – “Heavy Metal Baby” (2018), “Summer Nights & City Lights” (2019), and “Take It All In Stride” (earlier this year) – Drop Top Alibi has recently released their latest track, “Eyes For You”. Speaking on the single and how the band is surviving the pandemic, vocalist and guitarist Brandon Gregory gives his insight into the band and what fans can expect in the future.

Released in August, “Eyes For You” is the latest single from Drop Top Alibi.  “We collaborated with Michael Hanson, he was the co-producer and the original drummer in Glass Tiger… I wrote the riff a couple years ago but it didn’t get to pre-pro until when around Jeff joined the band, it got selected and we let it rip. It was written with the opioid crisis in mind but it’s become more about mental health and kind of sounding the alarm with addiction and substance abuse”. Given the heavy subject manner, “Eyes For You” is a dark and moody song with Gregory’s haunting vocals lingering over a heavy verse and pre-chorus before digging deep into a larger than life chorus. “It’s about as heavy as we get. No one has really seen it as a departure, but its darker”, he states in comparison to the softer and more uplifting vibes of both “Summer Nights & City Lights” and “Take It All In Stride”, both of which, along with “Eyes For You”, were recorded with Hanson in 2019.

“Eyes For You” is certainly among the strongest releases from Drop Top Alibi. So much so, that the band has since released an extended cut of the track that clocks in at just under two minutes longer than the original. Explaining the choice to do so, Gregory explains, “there’s a way we wrote the song and there’s a way we like to play it live. We can have the three-minute version, and then there is the five-minute version”. Featuring an instrumental section and extended guitar solo, “Eyes For You – Extended” is a stellar adaption of a great song that only intensifies the darkness and excitement of the original song.

Like all other artists, Drop Top Alibi has been making the best of their 2020 despite having to drastically alter their plans. Citing a canceled cross Canada tour during the spring, Gregory seems cautiously optimistic for 2021. “We won Rocksearch [2019] and then “Burn” [originally released in 2017] made its way onto the radio, so we’ve been sitting on these songs longer than we wanted to. We thought these may have been an EP, but my sense, especially with COVID and all the material we’re working through right now, I would anticipate that the next release Drop Top does is all brand new stuff”. Despite this, however, if “Eyes For You”, both the original and extended cut, are any indication, it is truly an exciting time to be a fan of Drop Top Alibi.

A passion for music has always been a part of Gerrod’s life. As a young boy, he was raised on a steady diet of the music from The Chili Peppers, Aerosmith, The Stones, Prince, and others from his mum. Raised in the GTA, Gerrod continued to foster his love for music by attending a wide range of concerts and learning the drums. His unapologetic passion for music has no bounds and has spread to a wide variety of styles, whether it be the 90’s rock that sound tracked his teenage years, the jazz he studied in university, or his newfound love for hip-hop. He recently received his bachelors in music and education from York University and is passionate about writing and reviewing good (and less than good) music. Gerrod is also the drummer and songwriter for a Toronto based rock & roll band, One In The Chamber.
RELATED ARTICLES
drop top alibifeatures