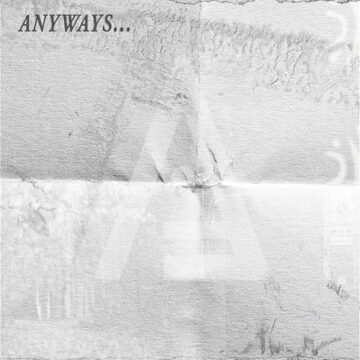 Following their 2017 debut, self-titled EP, and a string of singles released since then, Toronto hard rock outfit Drop Top Alibi has returned with Anyways…. The five-track EP sees the band trade in their glam-oriented tone and firmly embrace their grunge roots with what is perhaps their strongest collection of songs yet.

Anyways… opens with the initial three singles: “Dylsong”, “A Place To Hide”, and “Some Sort Of Reaction”. The riff-heavy “Dylsong” hits hard as the album opener. With softer, simplified verse, the band comes alive with that massive chorus and a nuanced, ambient bridge section; it’s no wonder that “Dylsong” was the first single released from the record. “A Place To Hide”, with its rhythmic pulse and squealing guitar sounds like Queens Of The Stone Age’s take on arena rock while “Sort Of Reaction” brings a subtly sinister harmonic structure to what would otherwise be a straight ahead rocker with yet another banger for a chorus.

Recorded live off the floor with minimal overdubs – and largely using vintage gear – Anyways… rocks a gritty tone that further adds to the sense of darkness that surrounds much of the record. In many ways, this is a ‘90s record, made thirty years later. The album concludes with the remaining two tracks, neither released as singles. “Ridin 50’s” embraces these notions in full force with an off-kilter groove and relentless delivery accented by vocal harmonies and a growing sense of impending doom. Bringing the record to a close is the Soundgarden-inspired “Concrete Souls”, perhaps the darkest track on the album as the band employs abrasive dissonance and atmospheric textures for a stellar performance; I remember first hearing this song live and being blown away – the feeling remains.

Drop Top Alibi has found its sound on Anyways…, an EP that is a gem among the Toronto musical community that also raises the bar among the growing wave of independent rock bands. Standing among the strongest releases I’ve heard this year, I cannot praise the band enough for their raw performance and refined creativity. Anyways… is an exceptional step forward for Drop Top Alibi as they make a monstrous play for the spot as the coolest Canadian independent rock band.

A passion for music has always been a part of Gerrod’s life. As a young boy, he was raised on a steady diet of the music from The Chili Peppers, Aerosmith, The Stones, Prince, and others from his mum. Raised in the GTA, Gerrod continued to foster his love for music by attending a wide range of concerts and learning the drums. His unapologetic passion for music has no bounds and has spread to a wide variety of styles, whether it be the 90’s rock that sound tracked his teenage years, the jazz he studied in university, or his newfound love for hip-hop. He recently received his bachelors in music and education from York University and is passionate about writing and reviewing good (and less than good) music. Gerrod is also the drummer and songwriter for a Toronto based rock & roll band, One In The Chamber.
RELATED ARTICLES
album reviewalbum reviewsdrop top alibi
8.0