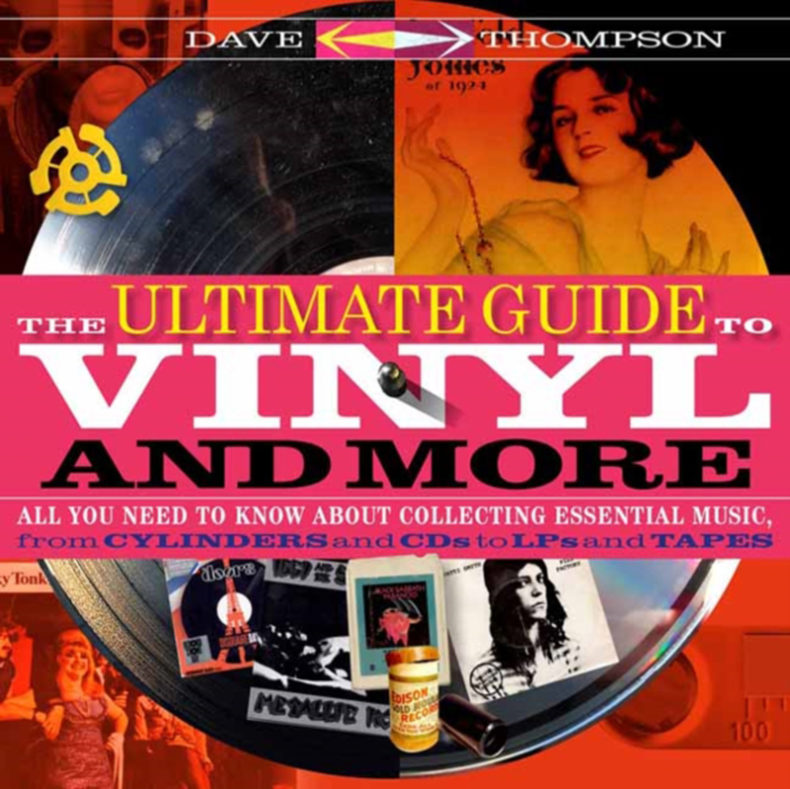 Dave Thompson – The Ultimate Guide To Vinyl And More: All You Need To Know About Collecting Essential Music, From Cylinders And CDs To LPs And Tapes

Dave Thompson knows his music and collecting. He has written close to 200 books on music and pop culture, and is a columnist in the record collecting bible, Goldmine. He is also the editor of that magazine’s series of record guides. In fact this book, The Ultimate Guide To Vinyl and More is a revamped and expanded edition of the same book released in 2002, and it has really been expanded to the point that, for all intents and purposes, this is an all new book.

I am a record collector, a completest if you will, and I often approach such books with great trepidation. The fact is that this book does not set out to be the be all and end all book about record collecting and rare records, but rather an examination of collecting and the fun that some of us experience in searching that elusive copy of “Please Please Me” on Vee Jay records, white label, with matrix number…., well you get the idea.

The book is extremely well written and sympathetic to collectors. It is also remarkably funny. Most books list the most valuable records, which this book does, but Thompson lists the least valuable records (Lee Clarke and The Royal Philharmonic Orchestra’s 1981 classic Hooked On Classics). That is what I call thorough.

The book is not arranged in chronological order, nor listed band by band, rather it is set up in four sections. The first section, “Collecting and Collections” is exactly what it says. Here Thompson outlines the history of the habit and some methods of how people collect and what collections encompass.

The second section outlines “Collections and Collectibles” This includes everything from cylinders to 78s to reel to reels. Thompson examines all the different formats and it is fascinating reading. He even writes about the long lost minidiscs (I have all of the McCartney releases in this format as well as a player).  This leads into section three, “Eye Of The Beholder” examining how one may curate their collection. The last section examines “Thirty Collectible Record Labels” (and The Beatles ‘Apple’ label as well as solo labels ‘Dark Horse’ and ‘Ring O’Records’ make the cut).

Thompson has a style of writing that is immediately readable, and maintains the reader’s interest throughout the entire book. He also illustrates the book with record sleeves, labels and memorabilia. It is a cliché to say, but I found it difficult to put down once into it. You will learn a great deal as you read it (what exactly are ‘pocket discs’) and you may find yourself going on to Discogs or eBay when you put the book down.

Thompson’s The Ultimate Guide To Vinyl And More: All You Need To Know About Collecting Essential Music, From Cylinders And CDs to LPs and Tapes (phew long title) is not a price guide but rather a book about collecting. Collectors will love it and people in their lives would do well to read it to glean some understanding in this often misunderstood activity.

Purchase The Ultimate Guide To Vinyl And More Via

Born and raised in Whitby, Aaron discovered music through his love of The Beatles. This led to a career in radio, writing for various publications, and ultimately a radio show about The Beatles (Beatles Universe), which ran for over four years. When not immersed in music, Aaron enjoys spending time with the loves of his life -- his wife Andrea, and daughters Emily and Linda (all of whom have an intense love of music too).
RELATED ARTICLES
backbeat booksbooks