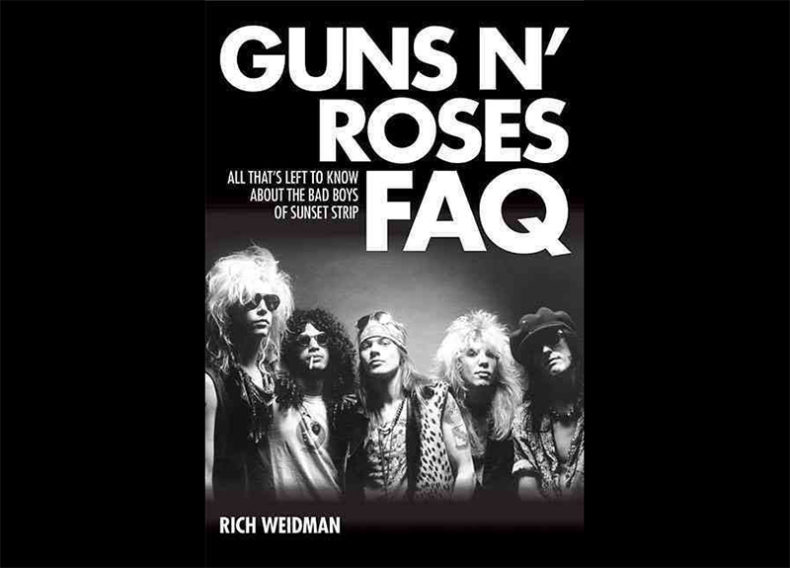 The FAQ is an excellent book series. When you see the FAQ in the title, you know you are in for a great book, full of facts and void of errors. These books are extremely well researched and they present the information in a very readable fashion. In fact, Weidman has also written books on The Doors and The Beat Generation for the FAQ series.

Guns N’ Roses FAQ (All That’s Left To Know About The Bad Boys Of Sunset Strip) is no different.  Weidman knows this band, is very knowledgeable about the band and has written an entertaining and informative book. Let’s face it, love them or hate them, this band has never been boring. Their career, performances, private lives, everything is fascinating about these guys.

This book goes some distance in explaining the bands lack of recording, or work period. It is interesting to read about the divorces, band fights, and general behaviour of the band and their members. Weidman does not make excuses, he presents the information as it is. He utilizes quotations and provides the source of the members of the band and people associated with the members. The comment from one time girlfriend of Rose, Stephanie Seymour is revealing and disturbing. Again, Weidman does not shy away from the facts.

The book also lists the numerous fights and live television performances of the band, as well the most ‘notorious” concerts of the band. Again, this is based on fact, not opinion. Television appearances, such as the 1989 MTV Music Awards show, where Slash was sucker punched by Motley Crue’s Vince Neil. It made for entertaining television. And the concerts that began hours late, such as the concert in Montreal at The Olympic Stadium in 1992 (with Metallica), where the band hit the stage over three hours late and then walked off after nine songs.

All of the albums are covered (Chinese Democracy really cost 14 million dollars?!?!) and there is a section of rare, obscure GnR songs. Very thorough. There is also a chapter in the book about solo records and super groups (Velvet Revolver). While not a discography it does give an excellent overview of their albums, including information on the recording, production and everything in between.

Fans of GnR will love this book. It has a great deal of information, lots of great pictures, and well put together.  Many of the facts are interesting, and there was a great deal I learned from reading this book (I did not know they opened for Johnny Thunders, Cheap Trick and Ted Nugent to name just a few). As with other books in this series, Guns N’ Roses FAQ is a brilliant book that is enjoyable to read as well as informative.

The Spill Magazine is a Toronto-based online publication dedicated to covering the independent music scene with a strong focus on our thriving hometown talent. Our writers bring you up-to-date news, in-depth features on musicians and reviews for the latest CD releases. We also travel to the front lines for all local festivals including Canadian Music Week and North by Northeast. Don’t forget to check out our Facebook and Twitter pages for all daily Spill updates.
RELATED ARTICLES
backbeat booksbooksguns n' roses

by Aaron Badgley on September 1, 2018
Dave Thompson – The Ultimate Guide To Vinyl And More: All You Need [...]