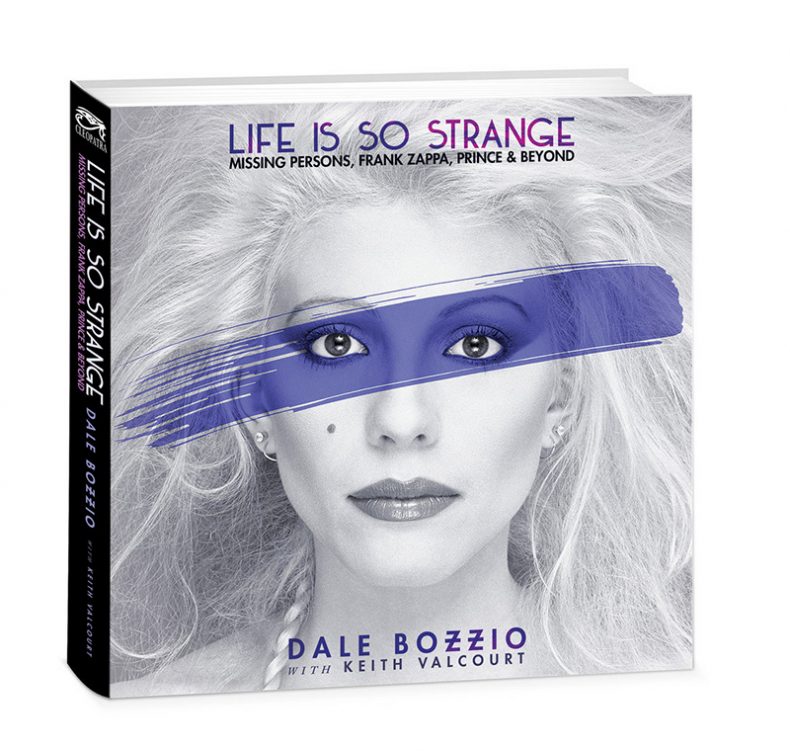 DALE BOZZIO WITH KEITH VALCOURT – LIFE IS SO STRANGE: MISSING PERSONS, FRANK ZAPPA, PRINCE AND BEYOND

Dale Bozzio has lived a very colourful life. Born Dale Frances Consalvi in Medford, MA, she was already directed to a life in music given the fact that her paternal grandfather, Icilio Consalvi designed the King Banjo and the first resonator for guitars and banjos. She also had a great grand uncle who worked closely with The Pope. But for Bozzio, early childhood life was not easy, being raised by her father after her mother left the family home when Bozzio was nine, and her brother in prison, she had to find the strength and determination to get out of Medford for a better life elsewhere.

That journey began with her first meeting with Frank Zappa. She writes very lovingly about Zappa, and he is, in many ways, her second father. He supports her career and provides her with life lessons that she uses to this day. He was also incredibly supportive following her terrible accident (which one has to read about). She also writes very positively about her first husband, Terry Bozzio, and does not point any blame his way about the failed relationship. She is honest about it, which makes for interesting reading. Perhaps more eye opening is her relationship with Prince. In between the meeting of these people are several other associations and adventures. In the old days, this book was what you would call a page turner.

Bozzio has written the book in a very conversational style. One gets the sense she is talking to you as you read. She does not censor herself and she says tells it the way it is. She is not afraid to name names and she is very honest and open about her life, sometimes to a fault. The chapter about her significant others is not for the faint of heart but it makes for fascinating reading. She does have the help of Keith Valcourt, a writer, who assists her in staying on task and track and she credits him a great deal throughout the book in helping her write about her story.

She also incorporates poetry/lyrics in the book, which adds a great deal. It becomes more than an autobiography and more of an art piece. Combining the poetry with several pages of wonderful colour photos makes it more of a coffee table book. But of course, Life Is So Strange – Missing Persons, Frank Zappa, Prince And Beyond is much more, but it is beautifully packaged, including a wonderful pink vinyl single featuring new versions of “Destinations Unknown” and Bauhuas’s Kevin Haskin’s remix of “Mental Hopscotch”, a song Bozzio notes as being Zappa’s favourite Missing Person’s song.

One does not have to be a fan of Bozzio to enjoy this book. It is a fascinating read into how parts of the entertainment industry work and the impact of fame on an individual. It is a hard book to put down and as such it seems like a quick read. It really isn’t. Bozzio packs a great deal into this book and the reader benefits from extraordinary memory and her honesty.

Purchase Life Is So Strange: Missing Persons, Frank Zappa, Prince And Beyond Via

Born and raised in Whitby, Aaron discovered music through his love of The Beatles. This led to a career in radio, writing for various publications, and ultimately a radio show about The Beatles (Beatles Universe), which ran for over four years. When not immersed in music, Aaron enjoys spending time with the loves of his life -- his wife Andrea, and daughters Emily and Linda (all of whom have an intense love of music too).
RELATED ARTICLES
bookscleopatra records pressdale bozzio