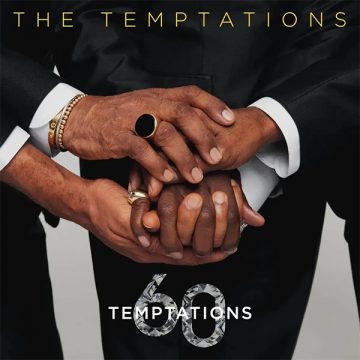 In 1958 Otis Williams formed a singing group with his friends, Otis WIlliams And The Distants. They didn’t have a lot of success but four years later when they changed their name to The Temptations, things changed. After signing to Motown , they released their debut single in 1961, “Oh Mother Of Mine”, and they would go on to achieve 44 Top Ten R&B chart hits, including 14 number ones on that chart, and 14 top 40 hits, four of which made number one on The Billboard Hot 100 singles. Now we celebrate their 60th anniversary with the release of Temptations 60.

This is a great album and one that will please the fans. It is a mixture of traditional and historical Temptations, updated for 2022. It is not retro but rather an aging, mature band adopting new styles and music.

The album opens with “Let It Reign”, which is immediately followed by “When We Were Kings”, a retrospective look at the band. Smokey Robinson, who was partially responsible for signing the band to Motown and co-wrote and co-produced their first hit, “The Way You Do The Things You Do”, makes an appearance on “Is It Gonna Be Yes Or No”, and sounds as good as ever. The album ends with “Come On”, which features WIlliams telling the story of The Temptations, and incorporating a fantastic version of the Otis Williams And The Distants minor hit, “Come On”.

While the album is chock full of love songs, the band does address current events. The Temptations have never been afraid of dealing with politics (“Papa Was A Rolling Stone”). Here they bring us“Time For The People”, complete with sound clips of the protests/marches from 2020 and 2021.

The Temptations work with several producers on the album, but it is when they take control and produce themselves that they shine. Although Narada Michael Walden is a talented producer and musician, he takes the band into ‘middle of the road’ territory, which sounds good but is too slick and overproduced, as in “Breaking My Back”. The same can be said here for Dave Darling. Given his work with Brian Setzer, one would imagine a more energetic approach, but with “My Whole World Stopped Without You” is not as exciting as it could have been.

Having said that, this album is full of remarkable music. They may not be the golden era lineup Temptations, but on Temptations 60 they prove that they are still strong and have a great deal left to say and sing.

Born and raised in Whitby, Aaron discovered music through his love of The Beatles. This led to a career in radio, writing for various publications, and ultimately a radio show about The Beatles (Beatles Universe), which ran for over four years. When not immersed in music, Aaron enjoys spending time with the loves of his life -- his wife Andrea, and daughters Emily and Linda (all of whom have an intense love of music too).
RELATED ARTICLES
album reviewalbum reviewssmokey robinson
8.0