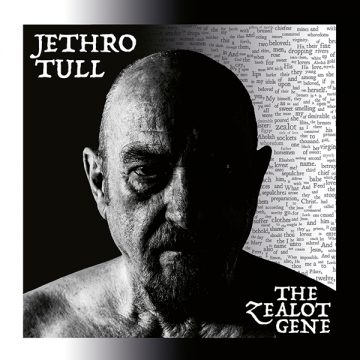 Jethro Tull
The Zealot Gene
Inside Out Music/Sony Music

Ian Anderson has released several solo albums in the past 19 years. However, with The Zealot Gene being the first album by Jethro Tull in almost two decades, expectations are high.

Ian Anderson has come up with a wonderful album, having written all the songs himself. This is a Jethro Tull release that not only meets expectations but surpasses them. It is a concept album, of sorts, and a return to form for the band. It is  twelve rock tracks that fit very nicely together. They do not sound dated, but rather current, yet would not have been out of place in the late 1970s.

The Zealot Gene  open with Anderson’s fantastic flute on “Mrs. Tibbets”. Next comes the voice, Ian Anderson in all of his glory. The flute gives way to power chords and it is on its way. There are some great surprises, such as Anderson’s harmonica on “Jacob’s Tales” , which is far too short, the moody background on “Shoshana Sleeping”, the English folk genre of “The Fisherman Of Ephesus” and the hard rock sounds in “Barren Beth, Wild Desert John”.

Florian Opahle is a fantastic guitarist. He provides strong guitar solos, especially in “Mrs. Tibbets”,  but more often provides a steady backing. The majority of the solos are from Anderson on his flute. Special mention should also be made regarding Anderson’s acoustic guitar performance.

The Zealot Gene just may be the album fans have been waiting for for a very long time. It is a classic Jethro Tull album. For the most part, the album was recorded with all the members being in the same room, and at times, live off the floor. This energy and band unity is felt throughout. This is also an album that Jethro Tull could tour and would sound fantastic live. Fans should enjoy The Zealot Gene. It is beyond words how good it is to have Jethro Tull back.

Born and raised in Whitby, Aaron discovered music through his love of The Beatles. This led to a career in radio, writing for various publications, and ultimately a radio show about The Beatles (Beatles Universe), which ran for over four years. When not immersed in music, Aaron enjoys spending time with the loves of his life -- his wife Andrea, and daughters Emily and Linda (all of whom have an intense love of music too).
RELATED ARTICLES
album reviewalbum reviewsian anderson
8.0