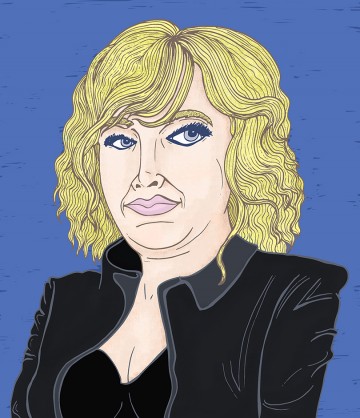 Lucinda Williams is one of America’s most critically acclaimed songwriters and recording artists, as well as the daughter of poet Miller Williams. She has won three Grammy Awards and is considered a leading light of the so-called “alt-country” movement. Her songs, with their simple chord structures and gorgeous melodies, incorporate elements of rural blues, traditional country, and rock and roll. They are distinguished by evocative, plain-spoken lyrics that investigate the human mystery. In 2002, Time magazine called her “America’s best songwriter.”

Lucinda Williams was born on January 26, 1953, in Lake Charles, Louisiana. Her mother was Miller Williams’s first wife, Lucille Day. With her professor father moving from job to job, Williams grew up in southern towns such as Vicksburg, Mississippi; Jackson, Mississippi; Baton Rouge, Louisiana; and New Orleans, Louisiana. She also lived for a time in Mexico and Santiago, Chile. As a child, she met many of her father’s writer friends, including Eudora Welty and Flannery O’Connor, who famously allowed the five-year-old Lucinda to chase her peacocks. By the time she was twelve years old, she was writing her own songs on guitar and performing for her parents’ guests.

Her family moved to Arkansas in 1971 when her father took a teaching position at the University of Arkansas (UA) in Fayetteville (Washington County). After a brief stint at UA herself, she began the career of an itinerant musician, playing in bars and coffeehouses in Austin, Texas; Nashville, Tennessee; Houston, Texas; and Greenwich Village, New York. In 1979, calling herself simply “Lucinda,” she recorded Ramblin’ on My Mind for Smithsonian/Folkways. It was a minimalist album of old blues and country songs by the likes of Robert Johnson, the Carter Family, and Memphis Minnie. Williams sang and played twelve-string guitar; her only accompaniment was John Grimaudo on six-string guitar. The sole original song was Williams’s own “Disgusted.” Her second album, 1980’s Happy Woman Blues, credited to “Lucinda Williams,” was recorded with a full band and consisted mainly of Williams’s original pop country material. Neither album received much attention.

Williams moved to Los Angeles, California, in the early 1980s, where she fronted rock bands and developed a cult following and a critical reputation. But it was not until 1988, with the release of Lucinda Williams, that she established herself as a singer/songwriter of the first rank. Sometimes referred to as “the white album” by fans and recorded for Rough Trade, a British label that specialized in punk and ska acts, the album was only a minor commercial success, though it earned her a small but intensely loyal following and a burgeoning reputation as a “musician’s musician.”

When Rough Trade abruptly folded after the album was released, RCA stepped in and signed Williams. But when they presented her with sugary, radio-ready mixes of her songs, she walked out. She eventually landed at Chameleon, another tiny independent label, and the RCA songs showed up—mixed her way—on her 1992 album Sweet Old World, a collection of trenchant songs about longing, love, death, and survival. (The song “Pineola” was a fictionalized account of the suicide of a family friend, poet Frank Stanford.) Sweet Old World was voted the eleventh best album of 1992 by the Village Voice’s prestigious “Pazz and Jop Poll” of critics.

In 1993, Mary Chapin Carpenter had a hit with “Passionate Kisses,” off Lucinda Williams, for which Williams won a songwriting Grammy. Patty Loveless recorded her “The Night’s Too Long,” and Tom Petty covered her “Changed the Locks,” both from Lucinda Williams.

In 1998, she released what is often regarded as her masterpiece, Car Wheels on a Gravel Road, which went on to win a Grammy for Best Contemporary Folk Album. In Rolling Stone magazine, the venerable critic Robert Christgau called the album “perfect.” Williams toured with Bob Dylan, one of her primary influences, and on her own, in support of the album. Williams followed up the success of Car Wheels with the brooding, stripped-down Essence in 2001 and the musically adventurous World Without Tears in 2003. In 2005, she released an old-style double live album, Live @ the Fillmore. In part because of the relatively long time between album releases, Williams has developed a reputation as a perfectionist.

Williams did a number of low-key concerts with her father, trading acoustic versions of her songs with his poetry readings. She continues to tour and write songs. She released the album West in 2007 and followed that up the next year with Little Honey. In 2011, she released the album Blessed. Down Where the Spirit Meets the Bone came out in 2014.

Her new album The Ghosts Of Highway 20 is slated for release in North America February 5th.

The Ghosts of Highway 20 from Lucinda Williams on Vimeo.