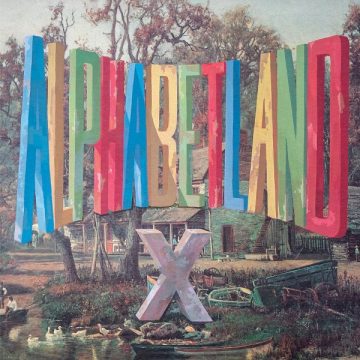 There is no doubt from the first few bars of album opener “Alphabetland” that Los Angeles icons X have never really left us. It’s surreal to think 35 years have passed since the original lineup recorded an album together. Granted, Ain’t Love Grand wasn’t too grand, but it gave us the classic, “Burning House of Love”. They’ve been back at it, and early last year they went into the studio and Alphabetland is the stunning result of their sessions. The pace, fury and boogie are all still there. Not a damn thing has been dumbed down or diluted and this album delivers full throttle.

“Water & Wine” is a rockabilly romp with some smoking guitar licks from Zoom and some tasteful saxophone and piano to add that extra layer. “I Gotta Fever” is probably the catchiest ditty of the bunch. The power of the straight-ahead vocal delivery and hook of the chorus are so Wild Gift reminiscent. Songs like “Star Chambered” and “Angel on the Road” throw back to memories of their classic tales of being rough and tumble and misspent youth.

“Delta 88 Nightmare” was a demo from 1978 that they never properly recorded but was included on an expanded CD version of that album. A side by side comparison will make you shake your head wondering which was recorded in 1978 and which is from 2019. That’s a 42-year difference and they show no slowing down.

“Cyreno De Berger’s Back” was another song written around 1980 but wasn’t released until the post-Zoom X line-up’s See How We Are album from 1987. This time, it’s given more groove and far better harmony from Cervenka Exene to John Doe’s lead vocal. Another beautiful homage is ex-Doors guitarist Robby Kreiger playing some additional guitar on the album closing, beat poet-inspired “All The Time In The World”. Ex-Doors keyboard wizard Ray Manzarek produced and appeared on much of the band’s early output.

I cannot think of a brighter spot on 2020’s crap sandwich of a year than the surprise release of this album. I cannot find a flaw. Literally. The time spent back together hashing through their catalogue in venue after venue has somehow sparked the same creativity that catapulted them in the early ‘80s. They burn just as bright as the X on Los Angeles 40 years later on Alphabetland and let’s all pray they have a few more in them just like this.

Michael Mitchell's love of music started at an early age and slowly became an addiction that courses through his veins to this very day. It is guaranteed that if you are in his proximity, he will try to get you to travel to the nearest record store and make you buy beyond your means. His wife and two children acknowledge his problem and continue to encourage him into rehab. He currently writes for Torched, Stereo Embers, God is in the TV, ReGen and Spill magazines.
RELATED ARTICLES
album reviewalbum reviewsfat possum
9.0