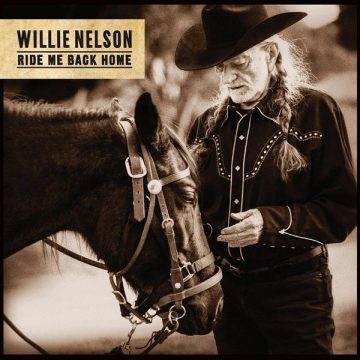 Willie Nelson’s 13th studio album with Legacy Recordings, Ride Me Back Home, is a beautiful record in which Nelson explores such grand themes as time, succumbing to it, fighting against it, as well as allying with it and playing along. While the second track, “Come on Time”, is perhaps the most direct as it both challenges and pleads with the passing of time, the entire album’s center is processing the things that happen as it all passes along.

A quick review of Nelson’s discography reveals that for virtually his entire career he has been more than willing to work with and cover songs by other artists, re-interpreting them through his own sensibilities, and there is much of that here. Mixed in with some new original material are excellent covers of songs by Billy Joel, Mac Davis, and the late Guy Clark, who Nelson’s rendering of “My Favorite Picture of You” is an agonizing reflection on the past and one of the standouts of the album.

The sequence of the songs on this album is particularly good as well, with a mournful, reflective song often followed by a more upbeat, defiant, or subtly humorous one in a way that creates satisfying emotional movement and reflects in its overall design the image many of us have of Willie Nelson as something of a musical trickster; serious and spiritual, but always with a grin, too.

Despite its concerns with time, mortality, and memory, this is a contemplative, reflective ode to living with those concerns, accepting them, challenging them, and finding ways to keep going. One of the later tracks, the defiant “One More Song to Write”, exemplifies this idea perfectly (before, of course, being followed by the more somber historical political sadness of “Nobody’s Listening”).

Overall, the legacy of Willie Nelson continues here with 43 minutes of songs that concern themselves with the most critical of human struggles, how to cope with the passing of time and be okay. In a world that is often fast-moving and forward-looking, this album reminds us to pause and look back, to remember and confront old memories from the position of the present, while the structure of the album keeps you from drifting too far one way or the other emotionally, and by the end, there is catharsis in there for all of us.

Dan Kennard is an English teacher and fiction writer living outside Kansas City, Kansas where he lives with his wife and children. More about his work can be found at amazon.com/author/dankennard. You can also follow him on Twitter and Instagram @kennardistry or contact him at kennardistry@gmail.com.
RELATED ARTICLES
album reviewalbum reviewslegacy recordings
7.0