SPILL ALBUM REVIEW: VILLAGERS – THE ART OF PRETENDING TO SWIM 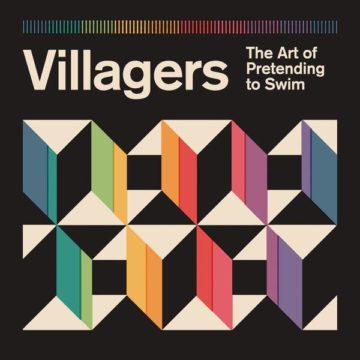 Villagers
The Art Of Pretending To Swim
Domino Records

Listening to the new Villagers album The Art Of Pretending To Swim, Ireland’s Conor O’Brien’s absolutely adorable voice once again stands out. This time O’Brien has written nine new songs using more or less the same formula as the previous three studio albums. Why change something that really works and brings so much joy and redemption to the listener? If you haven’t already become acquainted with Villagers, this is a brilliant place to start. But once you have listened to the album, you better hurry down to 2015’s Darling Arithmetic. That album is Villagers in its purest form. The Art Of Pretending To Swim is a good album though, it reaches further back than Darling Arithmetic, back to the first two albums, where the sounds were a little more complex. This time O’Brien is adding a dance beat and a touch of both analog and digital sonic details to that sound. Everything on the album is, by the way, played by O’Brien himself, with a little help from strings and horns.

The album begins with three really strong songs: “Again”, “A Trick of the Light” and “Sweet Saviour”. “Again” adds some edge to O’Briens voice in the repeated slightly distorted word “Again”, that runs throughout the song, and like the album, the song has something to do with faith and God: “I’ve found again (Again)/A space in my heart again (Again)/For God again (Again)/In the form of art again (Again)”. “A Trick of the Light” follows with a slightly R’n’B feeling and a grooving bassline and again there’s the question of faith. “If there’s a sign in the sky tonight”, O’Brien insists that “no one’s gonna tell me it’s a trick of the light”. No, for him, there’s more to it than just that. Knowing about his religiousness, it is God that delivers the signs. “Sweet Saviour” is a lovely melody with a broken-up drumbeat and a great keyboard figure, the swooning lyrics becomes a little too much in this song though. The album closes with two lazy and quiet songs, the almost supersonic “Hold Me Down” and the lovely “Ada”.

SPILL ALBUM REVIEW: VILLAGERS – THE ART OF PRETENDING TO SWIM

From a Scandinavian record player in the middle of Copenhagen Jens Trapp brings you some new Scandinavian stuff. His favorite albums include: David Bowie: Honky Dory and Ziggy Stardust plus everything until Let's Dance The Clash: London Calling Elvis Costello: This Year's Model Genesis: The Lamb Lies Down on Broadway Pink Floyd: especially Wish You Were Here If I should name one, but most of it will do ;-)
RELATED ARTICLES
album reviewalbum reviewsdomino records
8.0