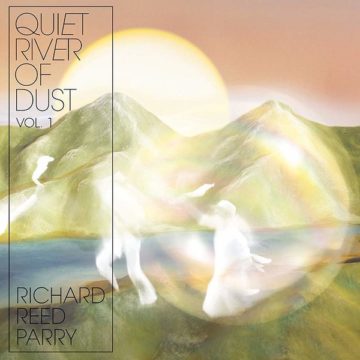 There is much to be said for retreat. To shut out the roar of the world and to sink within your depths for a glimpse at your own madness can be the most critical of stuff. For some, the description of such things is beyond words and incredibly personal, and for others it is a journey worth telling.

Ten years ago, at the end of Arcade Fire’s first tour of Japan the band’s multi-instrumentalist, Richard Reed Parry, took to a sabbatical at a monastery on the edges of an ancient forest. The deafening silence and gentle roar of nature somehow reminded him of his late father’s folk band The Friends of Fiddler’s Green, who figured prominently in his upbringing, was partly responsible for this collection of songs. And holy doodle, what a perfect melding of meditational psychedelia and British Isles folk. It is calm, complex, gorgeous, and as multi-layered as a million years of earth-rock formation constantly changing.

The first of two parts, Quiet River of Dust Vol.1 opens with the sounds of the deep forest calling of birds, leading into a strum of guitar and lilt of voice. “Gentle Pulsing Dust” is an easy entry but then it gets busy with so many different layers and sounds, much like a forest after a heavy rain when all the creatures come out to inspect a fresh new world. “Song of Wood” may be the most true to folk music leaning but it’s also a world apart, and Parry drawing from Japanese culture and the private things discovered during his retreat figure prominently here.

I get whispers of Animal Collective and Akron Family stream of consciousness while listening to Quiet River of Dust. This may be an intended inspired nod or perhaps these musical sounds are commonplace when the mind and heart are open and free. After all, true artistic expression is a free for all and the boundaries on this album are as thin as an onion skin with just as many layers. At some points the music is pure meditation but the voice and samples sprinkled within keep snapping me back to reality, and then the whole scene becomes a thing of pure beauty and chaos.

If you’re looking for wacky large-scale pop songs or standalone singles then it’s best to move on. While this piece of folk art boasts several ecstatic moments, it may be best left to the individual and their state of mind to find those instances, much like each one of us could walk amongst a garden and have a unique experience. To be honest, I don’t want to project beyond these moments, but the next phase of this two-part collection can’t come soon enough.

It took the recommendation of a best friend to get me into the pages of music magazine writing. Armed with the deepest appreciation for all the music, a ridiculous sense of humour, and the apparent ability to string a few words together, these fingers started giving. Who knew it would become one of my favourite things many years later and that I'd enjoy seeing my works published the world over?!
RELATED ARTICLES
album reviewalbum reviewssecret city records
8.0