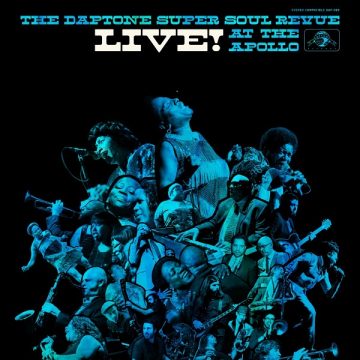 The discussion of neo-soul and funk is incomplete without Daptone Records. The label has proven to be invaluable to furthering the genre for nearly 20 years. With a roster that has been propelled by the likes of the late Sharon Jones and Charles Bradley, along with The Menahan Street Band, The Budos Band, The Sugarman 3, Saun & Starr, and many others, Daptone has been essential to modern funk and soul. As such, the label has released The Daptone Super Soul Revue Live At The Apollo, a massive roster spanning concert, recorded in 2014 over the course of three sold out nights at the Apollo Theater. Featuring 32 songs from over ten artists, The Daptone Super Soul Revue Live At The Apollo captures everything great about the label and its artists at what can certainly be considered one of their strongest peaks.

Opening with the high energy funk and shifting pulse of “Introduction” by The Dap-Kings, The Daptone Super Soul Revue Live At The Apollo feels like a classic revue in the truest sense. Within minutes of listening to this album, you’ll be wishing that you were at the Apollo in 2014 for this spectacle of a concert. The show truly starts with a trio of songs from Saun & Starr, featuring The Dap-Kings: “Hot Shot”, “Confess It”, and “In The Night”. Harkening back to a time when disco and funk were one and the same, Saun & Starr open the show with a level of flair and excitement worthy of The Daptone name. This is followed with standout performances from the cinematic and instrumental grooves of The Sugarman 3 on “Love Went Away”, the Tarantino funko of the Menahan Street Band’s “Make The Road By Walking”, and the closing cover of Sly And The Family Stone’s “Family Affair”, featuring all the artists from the night together on stage.

It comes as no surprise now, as well as back in 2014, that the spotlight of Daptone’s showcase would fall on Charles Bradley and Sharon Jones – after all, the two acclaimed soul artists are featured on over half the record collectively. Bradley, backed largely by his Extraordinaires – with the exception of one song with The Menahan Street Band and another with The Budos Band – has a six-song set, the largest next to Jones. Opening with “Heartaches And Pain”, Bradley’s voice will send chills down your spine with his voice’s effortless lows, between a gentle rasp to his signature throat-wrenching screams. His emotive performance bridges soul and funk with melodic ballads like “Lovin’ You, Baby” and the up-tempo swing of “How Long”. Bradley delivers a show stealing performance as he bares his soul in a truly remarkable way that only he can.

With nine songs, Jones brings the night to a close before the encore performance of “Family Affair” As the flagship of the Daptone label, Jones and The Dap-Kings delivered a jaw-dropping and powerful performance. Opening with “He Said I Can”, the sheer power of Jones’ voice is astounding, and her connection with backing band The Dap-Kings is incredibly tight. From the bouncing “Tell Me” to the grooving “I’m Not Gonna Cry”, Jones delivers a purely retro energy reminiscent of times long gone, while remaining distinct as one of the greatest soul singers of our time. Her set at the Apollo is a testament to this and so much more; an all-round reminder of the greatness embodied by that voice.

A passion for music has always been a part of Gerrod’s life. As a young boy, he was raised on a steady diet of the music from The Chili Peppers, Aerosmith, The Stones, Prince, and others from his mum. Raised in the GTA, Gerrod continued to foster his love for music by attending a wide range of concerts and learning the drums. His unapologetic passion for music has no bounds and has spread to a wide variety of styles, whether it be the 90’s rock that sound tracked his teenage years, the jazz he studied in university, or his newfound love for hip-hop. He recently received his bachelors in music and education from York University and is passionate about writing and reviewing good (and less than good) music. Gerrod is also the drummer and songwriter for a Toronto based rock & roll band, One In The Chamber.
RELATED ARTICLES
album reviewalbum reviewscharles bradley
8.0