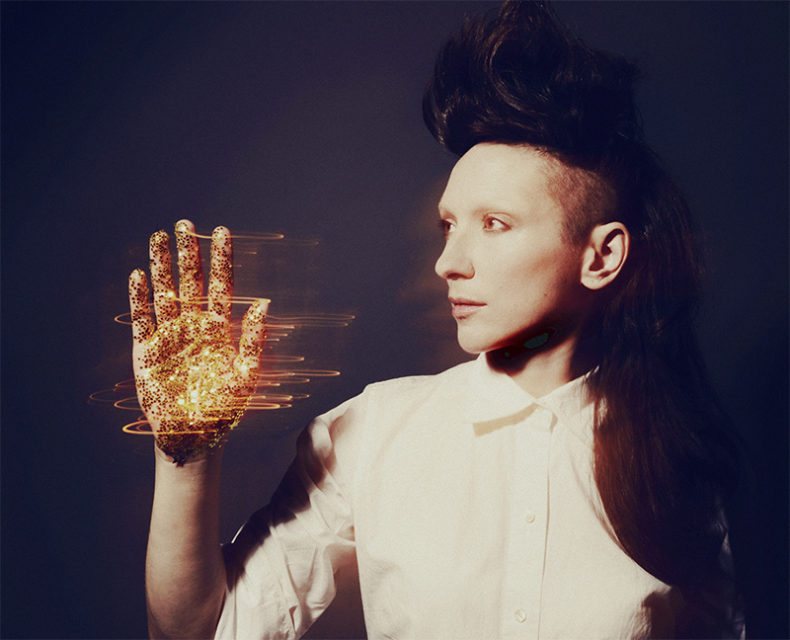 History was made, on Saturday night, in Toronto for My Brightest Diamond. For the first time ever, all three core members played together on stage on Thursday, June 24, 2017.

The band has been together since 2006, but have had changing members on stage, and the recording was done in different countries and assembled and mixed in a studio. But in Toronto, the core of the band, Shara Nova (previously Worden) on vocals, guitars and keyboards, Earl Harvin on drums and Chris Bruce  on bass and guitar got together (after Nova picked them up at the airport, she noted to the audience) and rehearsed and determined the setlist.

The show was a huge success. The band was tight and played  as if they have been playing together, in the same room, for years. The chemistry on the stage was electric and these three individuals clearly enjoyed the company of each other. Each member played their art beautifully and the result was an hour of old and new music played to perfection.

Nova is clearly the centre of My Brightest Diamond. On stage her performance is commanding. She is engaging and creates an intimate relationship between the band and the audience. Her voice is flawless and she is incredible to watch. She clearly enjoys being on stage and she has an the ability to connect with the audience.

They opened the show with “This Is My Hand” from the 2014 album of the same name. It was brilliant.. Stating up front, this is her, she is comfortable in her skin, so should the audience. It is a remarkably empowering song and almost a manifesto. A brilliant way to open a show. Much of the show was from that album (“Pressure”, “Lover Killer”, “I Am Not The Bad Guy” and “Before The Words”).

The band delivered some new songs as well, “Say What”, a song Nova and Bruce wrote about the recent killing of Black youths by police. Nova was clearly affected by the song and the situation. Anger and passion poured off the stage, with tasteful guitar work by Bruce and forceful drumming from Harvin. This needs to be recorded and issued.

That song was just one highlight. Nova took to the stage alone to perform a heartbreaking and moving song for her son, “I Have Never Loved Someone The Way I Love You” from 2011’s All Things Will Unwind.  It brought a lump to my throat. As did their restrained cover of Leonard Cohen’s “Bird On A Wire”, a song Nova dedicated to the audience.

The live mix was beautiful and each member had the chance to shine. All three are talented musicians, but special mention must be given to drummer Earl Harvin who provided some incredibly original beats to the songs.

This was an outstanding night by an outstanding band and was a special evening. The band are performed twice in the city as Luminato draws to a close.  Given the quality of the band and the show, I sincerely hope it is not another 11 years before this group is in the same room or on the same stage.  I also sincerely hope this show was recorded.  It would make for a fantastic listening experience.

Born and raised in Whitby, Aaron discovered music through his love of The Beatles. This led to a career in radio, writing for various publications, and ultimately a radio show about The Beatles (Beatles Universe), which ran for over four years. When not immersed in music, Aaron enjoys spending time with the loves of his life -- his wife Andrea, and daughters Emily and Linda (all of whom have an intense love of music too).
RELATED ARTICLES
live reviewpressure