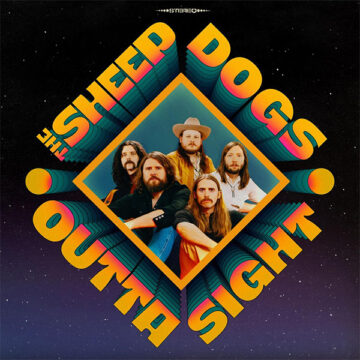 Saskatchewan’s The Sheepdogs have been a centrepiece of the Canadian rock scene for the last decade. Their first three label-released records achieved relatively great commercial success in Canada, their 70s rock’n’roll renaissance comfortably fitting into a genre oversaturated with modern sentiment.

On their fourth record, Outta Sight, The Sheepdogs have dug their heels in and delivered on their niche ten-fold. These eleven optimistic, easy-listening tracks are laden with relics from the past – channeling The Guess Who, The Rolling Stones & even Led Zeppelin – without losing that signature Canadian country charm.

Lead single “Find the Truth” acts as an apt indication of the record’s ambition. Striking layered guitars in full-fledged theatrical step with chanting vocals become a staple for the songs on Outta Sight, each varied enough to feel different than the ones that came before it, but still part of the same cohesive whole.

Standout songs include the percussion-driven “I Wanna Know You”, whose harmonic chorus feels destined for a stadium singalong and whose twangy electrics contribute to the subtle psychedelic touches throughout the record. The Fleetwod Mac-tinged “Carrying On” relies on sweet, soothing harmonies to drift along with fluttering keys and bluesy strings. There’s an effortlessness that is so prominent on Outta Sight, epitomized by moments like these. Take the juxtaposition of the muted verses and explosive chorus on “So Far Gone”, the album’s carefree, wispy centrepiece. Guitar solos on “Here I Am” and “Scarborough Street Fight” call back to Lynyrd Skynyrd and Pink Floyd, comparisons which are even further justified by Currie’s perfectly executed croon. Most impressive is the album’s closer “Roughrider ’89”, which rolls along with an erratic chord progression commonly found in old-school country music, but is elevated by some precise production to transform into a ballad reminiscent of KISS. Whether the Sheepdogs hold a reign over their own identity here is somewhat questionable, but becomes irrelevant on repeat listens because despite the very clear attempt to dress up like the past, Outta Sight still feels like something fresh and exciting.

By echoing the good ol’ days of 70s rock’n’roll, the Sheepdogs have created a jubilant rock record that stands a cut above the rest. It’s road tripping music with the sentiment of a summer music festival. Not a single song overstays its welcome (most tracks are 2.5-3.5 mins long) and each one brings something new to the table while sounding confidently in-step with the last. It’s The Black Keys without the dramatic riffs and attention-grabbing distortions. Just plain and simple rock music which, quite frankly, the popular music scene has been sorely missing for a very long time.

Robert Defina is an avid critic both on paper and in person. He spends more time writing album reviews than he does worrying about his future. He hopes that this sort of procrastination never grows old.
RELATED ARTICLES
album reviewalbum reviewsdine alone records
8.0